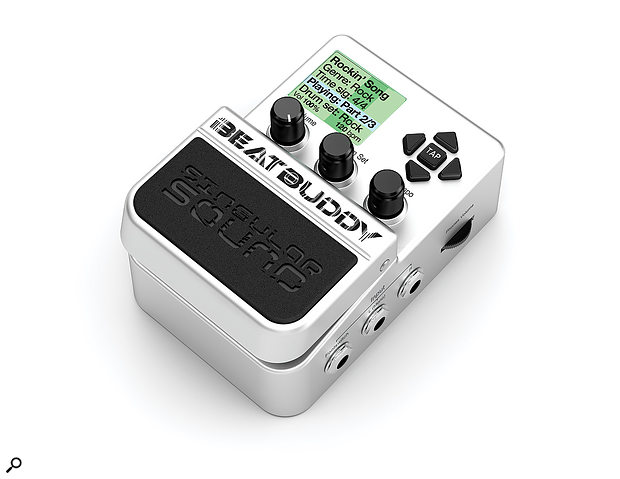 Hardware drum machines and effects pedals have been around a long time but Singular Sound’s claim that BeatBuddy is the first drum–machine pedal seems to be true. Like most non–pedal rhythm machines, the BeatBuddy provides a choice of kit sounds and playing styles and there are intros, outros, fills and transitions associated with each main loop. Its cleverness lies in the fact that the player can trigger the various song sections by pressing the pedal in different ways. It stops short of providing step–sequencing tools but a certain amount of programming can be done using the free BeatBuddy Manager software (for OS X or Windows) and, because the pedal uses General MIDI files for patterns and 16/24–bit WAV files for drum sounds, custom content can be generated using the software.

The pedal is almost exactly the length of a classic Boss stompbox but it’s a couple of centimetres wider and has more space around its controls. Power comes from the supplied mains adaptor (battery power isn’t supported). The sounds and rhythms are stored on a 4GB SDHC card, which is included and slots into the end of the pedal. The pedal’s firmware is updated using a ZIP file downloaded from the Singular Sound web site. This can be done via an SDHC card — you’ll need a card reader for this — but connecting to a computer via the pedal’s USB socket is also an option.

Two quarter–inch audio–input jack sockets allow stereo or mono operation. There are also two output jacks, via which both the drum sound and the audio input are delivered. The user has no onboard control of the input level (you’ll need to set that on the device that feeds the unit) but, usefully, there’s a knob to balance the level of the drums against the input. A further jack socket is used for connecting a double footswitch, which can be used to add ‘accent hits’ like cymbal crashes and to pause the drums, and there’s also a mini-jack headphone output (with its own level control) and a DIN socket to accommodate a MIDI sync cable. Both the footswitch and cable are optional extras.

Another knob, called Drum Set, selects one of 10 drum–kit types, the options being Standard, Rock, Metal, Jazz, Brushes, Percussion, Latin, Dance, Ethereal and Voice. They’re all self–explanatory except, perhaps, for Ethereal, which was reminiscent to me of ‘80s Roland drum machines, and Voice, which is very Art Of Noise. 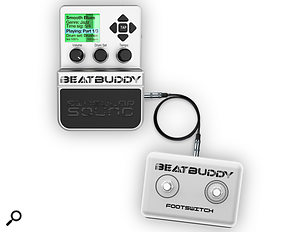 Optional accessories include a dedicated footswitch.Navigating the playing–style lists is done using the pedal’s four rubberised arrow keys and the Tap (tempo) key they surround. There are 22 pattern categories, starting with Blues and progressing through the alphabet to World via styles like Country, Punk, Funk, Reggae and so on. Each category has its own menu of patterns, which are frequently defined by their time signatures. In all, there are over 200 options to choose from. Most of the time, it makes sense to match the kit with the playing style but it’s also worth experimenting. I found Bossa Nova rhythm with a Metal kit to be quite an interesting combination, for example.

The screen for showing information about the selected kit, playing style, time signature, level and bpm is small but clever — it changes colour to show which song section it’s playing and displays a shaded bar, which passes across the screen in steps according to the bar’s signature. Very neat! The final control knob is used to adjust the tempo and can be used to access the Settings menu by pressing it and the Drum Set button together.

I’d suspected that when focussing on a performance selecting song sections with different foot presses could be tricky, but it’s actually really easy. When a sequence is triggered, it plays the intro and then heads into the ‘verse’ pattern. Thereafter fills can be triggered with a short pedal press, transitions with a longer one, and the outro by two close–together presses. Timing is not vital because the Buddy fits the loops in perfectly, and there are usually plenty of fill variations to make the song sound dynamic. Selecting a suitable starting patch takes a bit longer, but that’s only to be expected.

My biggest concern is that the design might not be totally stomp–proof. The chassis is very robust but the headphones’ volume wheel and the MIDI sync socket are fixed directly on the circuit boards and have no support from the chassis, as is the case with the SD, USB and power sockets. I also think it would be better if the SD card did not protrude. More reassuringly, all the jack sockets are firmly bolted to the chassis.

Overall, the sound quality is very good. The headphone output gets a bit noisy when set very high, but enough gain is available via the main Volume knob that you needn’t get into that territory. Another issue is that the guitar and bass amps into which this pedal will inevitably be plugged are not necessarily designed to be accurate or clean. Ideally, then, this pedal should have it’s own amplification, or be sent directly to the PA desk in live situations (if it is to retain the character of a real kit). If the guitar is using an amp simulator it could still pass through the pedal, but an unprocessed guitar is probably best sent to its own amp and not fed into the BeatBuddy at all.

It’s easy to imagine Singular Sound selling tons of these pedals. They’re simple enough to use live and during practice sessions, and provide great accompaniment when working on ideas. The only question is why nobody has made one before!