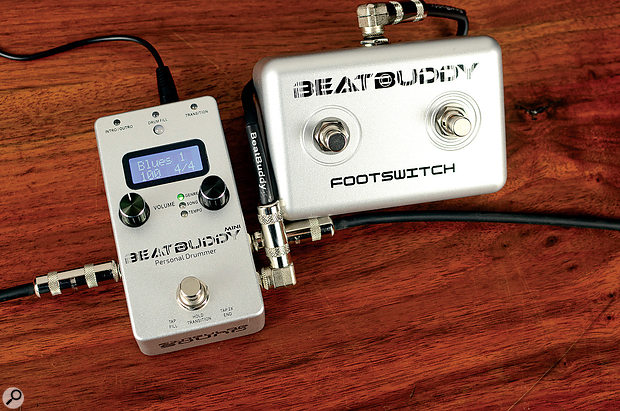 With the BeatBuddy Mini, getting a good-sounding rhythm accompaniment is as easy as tapping your feet.

Back in October 2015, SOS contributor Tom Flint took a look at the Singular Sound BeatBuddy, a drum machine in pedal format. For those who need something simpler, slightly more compact and cheaper, the BeatBuddy Mini reviewed here might just fit the bill.

Both models are geared towards live performance and rehearsal. The BeatBuddy Mini provides a choice of drum-kit sounds and rhythm pattern genres including intros, transitions and fills, but where it differs from typical drum machines is that its pedal format and simple operating system allow it to be used in live performance. While the BeatBuddy that Tom reviewed has a number of programmable options, access to a software editor and the ability to load different drum sounds and patterns, the BeatBuddy Mini is based entirely on presets.

Looking at the hardware first, the BeatBuddy Mini is built into a compact metal case that includes an input jack, allowing an instrument to be mixed with the drum sound so that it can be fed to the same amplifier — but this is clearly not the best way to use it. Like all drum machines, the BeatBuddy Mini sounds best when played through a full-range sound system such as a PA, a keyboard amp or an acoustic guitar combo, ideally with enough headroom to handle the kick drum without cringing. For practice, it is also possible to use the main output to feed headphones.

A second jack on the input side allows the connection of an optional double momentary footswitch, for a little more control. Power comes from the included centre-negative 9V supply, and when it’s powered up, the small backlit LCD window (two lines of eight characters) springs into life. For such a comprehensive device, the controls are extremely simple: just a momentary action footswitch and two knobs, one of which is a volume control. The rightmost knob is a rotary encoder with an integral push switch, and pushing the switch steps around the three modes — Genre, Song and Tempo — with the selection denoted by LEDs.

The genres cover a lot of ground, from rock, country and pop to reggae, techno, jazz, ballad, blues, beatbox, brushes, World and even ballroom styles, while in Song mode, you can select from a small number of variations within the chosen genre (typically five or six variations for each). The drum-kit sounds change according to genre.

Each song’s time signature and default tempo are displayed, but the tempo can be changed by pressing the encoder knob to select Tempo, then dialling in the value that you want. Clearly this could be a bit of a compromise when you are playing live, as there might be a lot of bending down between songs to change the pedal settings. That’s one area where the ‘full fat’ BeatBuddy scores, though life gets easier if you add the optional BeatBuddy Footswitch — of which more later.

Now, the reason the variations are called Songs rather than simply ‘rhythms’ is that, by deft use of the pedal, you can switch between two slightly different pattern variations to add interest to a chorus or solo section. The pedal also provides a suitable intro drum fill, spot fills on demand, and a fill when you transition between the two patterns within a song. So how is this possible from a single footswitch?

Once you have selected a song (and changed the tempo if the default doesn’t suit you), a single press on the pedal plays the intro fill, which is usually two bars long, and then you’re off with pattern 1 playing. Tap the switch once and BeatBuddy Mini plays a bridge beat. To create a transition to a chorus, press and hold the switch but release it before you want the second pattern (chorus) to play, otherwise the bridge beat will extend for as many bars as you keep your foot on the switch (which you may want to do on occasion). Repeating this action creates a transition back to the original beat. Finally, a double-tap conjures up an ending fill, after which the rhythm stops. While this might sound like a bit of a fiddle, it is actually very easy to get used to and it works reliably.

While some drum machines just churn out 4/4 or 6/8 time signatures, BeatBuddy Mini includes a number of options, including some less common time signatures such as 5/4 and a few useful swing rhythms. Fortunately, there’s a lot of visual guidance. A solid block marches across the screen when the pedal is playing, the number of steps being appropriate for the time signature selected so you always know where the first beat is. There’s also a multi-colour LED above the display, with dedicated Intro/Outro, Drum Fill and Transition LEDs to show you what the pedal is doing.

When the pedal is started, the multi-colour LED shows red for the duration of the intro fill, then goes green, pulsing once per beat to show the pattern is running. Amber denotes a drum fill. When you trigger a transition it turns blue, and then when the alternate pattern plays it shows green again. Double-tap to stop and it shows red for the outro fill, then goes out. The three dedicated LEDs mirror what the multi-colour LED is showing.

If you don’t like the idea of all that bending down between songs, then the optional two-button BeatBuddy Footswitch (which comes with a short TRS jack cable) can be used to step through genres and songs, tap in a new tempo, and trigger accent hits, typically cymbal crashes. It can also be used to pause and restart the rhythm. As you might expect, there’s more to these switches than just turning on or off. For example, you have to hold down the right-hand switch to cycle through Genre, Song or Tempo, then tap again to change the selection or, if in Tempo mode, tap in the tempo you want. This is much easier than it sounds and it doesn’t take long to switch between songs, but if you are in Tempo mode, the mode selector returns to Song after a few seconds of not using the switch. Using the rightmost switch when the song is running stops the song and then restarts it from the beginning of a bar. The left switch plays accents such as cymbal crashes.

Reassuringly, this pedal is very easy to use, and the switch operations become second nature within minutes. That’s very important with anything you rely upon in live performance. Sonically, the drum sounds are comparable with what you’d expect from any decent sample-based drum machine, with some nice acoustic kits augmented by suitable electronic kits for the more urban genres. Most of the rhythms are suitably solid and unfussy, though I did find some of the intro and outro fills to be a touch irritating and very soon I found myself wishing that there was some way to kill both the intro and outro fills altogether and have just a simple count in at the start and maybe a cymbal crash at the end. Most of the songs I play just don’t have that kind of intro fill. I communicated my opinion to the manufacturers, who said that it may be possible to introduce a feature in a future firmware update that would give the user a choice of a simple count-in, though I don’t know if it’s possible to update existing pedals as there’s no USB port on the Mini.

If you just want a very simple beat to replace what you might get from a stomp pedal, there is a workaround providing you have the BeatBuddy Footswitch connected. There are several very simple ‘boom-crack’ beats, such as Ballad 1, that would fit just about any song that’s in 4/4 time, so pick one of these, start the song with the volume turned down, pause the song using the rightmost BeatBuddy Footswitch switch, then turn the volume back up. Now you can use the right switch to stop and start the rhythm (it always starts from the front of the bar), and if you leave the Mini set in Tempo mode, you can simply dial in the tempo for each new song, then start/stop playback from the right-hand footswitch.

The BeatBuddy Mini is a well thought-out pedal that does exactly what it sets out to achieve, giving you the essence of the full BeatBuddy experience but in preset form. I’ve already voiced my opinion regarding the intro and outro fills, but if you are happy with those, it does a very credible job of carrying your songs along. If your songs include any pauses, the optional BeatBuddy Footswitch becomes an essential, but having one connected also conveys a number of operational advantages, so most users would benefit from having one.

As far as I know the BeatBuddy range is unique, although the Finhol Stompbox might also do what you need.

Mastering Essentials Part 3 - How loud should I master?
5 days 3 hours ago.