Looking for an audio interface that puts all the controls and I/O right where you need them? Check out our round-up of desktop devices.

When you look at the adverts in this magazine, you’ll find all their depictions of home studios have one thing in common: they’re all sickeningly tidy. There are no overflowing ashtrays, mouldy teacups, crumbs on the keyboard... Everything is clean, everything has its place and all the cables are neatly tidied away. Rather like the ubiquity of size–zero models in lifestyle magazines, these are unrealistic ideals designed to make you feel bad about your own grubby music production grotto. Real studios have clutter!

You must admit, though, that those clinical environments look awfully inviting — and if you only did some washing up every once in a while, and hoovered up those Twiglets you dropped three weeks ago, your own space might not look quite so shabby in comparison.

But there’s another, less drastic way to get closer to the feng shui studio of your dreams, and that’s to base it around a clutter–eliminating all–in–one desktop interface. No more separate monitor controllers or preamps, and all the controls at your fingertips, rather than on that dusty, wobbly rack unit that you’ve been meaning to get rid of. 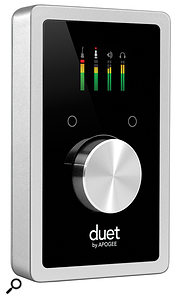 One of the first such devices was Apogee’s sleek and minimalist Duet, the latest version of which has two mic/line inputs, four line outputs and a headphone out. The large top–panel knob lets you control all the I/O — from preamp gain to monitor level and headphone volume — and a high–quality colour screen shows you the input and output levels. As you’d expect from Apogee, the audio quality is top–notch — though as you’d also expect from Apogee, it’s a Mac–only device. Happily for PC users, though, Avid teamed up with Apogee to make a Windows–compatible version called the Pro Tools Duet. It ships with a copy of Pro Tools, which is handy if you also need to invest in a DAW, but it has standard ASIO drivers, which means you can also use it with any other audio software. 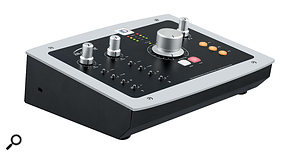 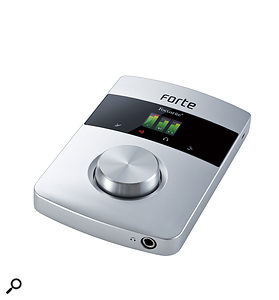 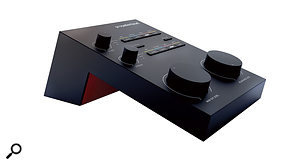 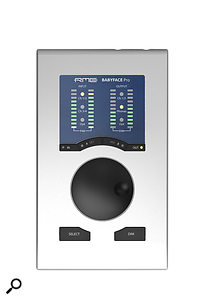 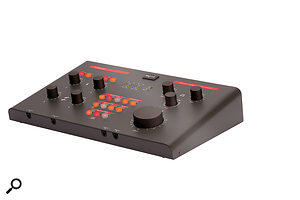 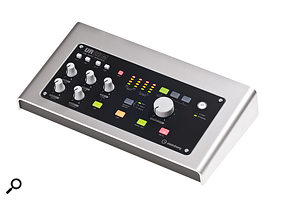 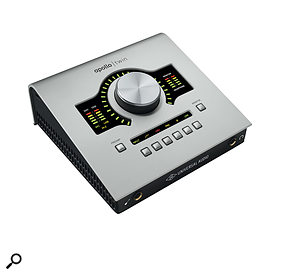 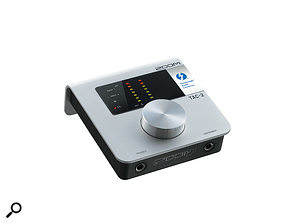 Zoom TAC–2.A similar device is the Focusrite Forte, which has a remarkably similar set of features. Its major selling point is the quality of its preamps — the design of which is derived from Focusrite’s flagship RedNet interfaces. These can provide a whopping 70dB of gain (which is unusually high for a stand-alone preamp, let alone an audio interface), and so should be able to cope with even the quietest of microphones.

Let There Be Lightpipe

If the thought of having just a couple of inputs seems rather restrictive, fear not: there are also some neat desktop options that feature ADAT Lightpipe connectivity, allowing you to add a further eight preamps courtesy of one of the many ADAT expanders available from the likes of PreSonus, Behringer, Audient, Focusrite and so on.

German interface stalwarts RME ticked this box a few years ago with their Babyface, and more recently again with the Babyface Pro — one of the big advantages of the latter being that it dispenses with the ungainly breakout cable, with all the I/O residing on the unit itself. There are two XLR inputs, two XLR outputs, a pair of line/instrument ins, MIDI I/O, and both input and output ADAT ports. And if RME’s past form is anything to go by, it also promises excellent stability and long–term technical support.

Audient’s offering, the iD22, is also rich in the I/O department, though it is also somewhat larger. It has two pairs of line outs rather than one, and its inputs each have access to their own balanced insert points. Its monitor–control section is surprisingly comprehensive, with mono and dim switching, a polarity invert option, speaker switching, and even talkback, via one of the two mic inputs.

If desk space is no issue, then you might consider SPL’s Crimson, which acts as a kind of console centre section and audio interface all in one. It doesn’t have ADAT, but it does have a healthy complement of analogue I/O: two mic inputs are joined by four further line-ins (two of which can also accept instrument signals), and there are four line outputs, as well as two pairs of stereo monitor sources, and two headphone outs. The Crimson features a neat ‘Artist’ mode, which allows the engineer and performer to hear independent foldback mixes.

Similar in nature to the Crimson is Steinberg’s UR28M, a six–in/eight–out device. As with the Crimson, the monitor–control aspect is very well served, with three different sources to choose from and switching for up to three sets of speakers. One feather in the UR28M’s cap is its onboard DSP, which provides low–latency effects and foldback routing.

The interfaces we’ve looked at so far have been fairly pricey affairs, but there are some recession–busting ones around too — of which one is Propellerhead’s Balance. Hardware–wise it’s a fairly typical device, its outputs comprising stereo line and headphone sockets, and its input count being made up of four line inputs, two mic inputs and two instrument inputs. Only two inputs may be used at a time, but a nice touch is that they can all be connected simultaneously, with the recording sources being governed by convenient top–panel switches.

Each Balance is supplied with a copy of Reason Essentials, and when used either with that or the full version the interface has a neat feature called Clip Safe. When recording a single channel only, Clip Safe essentially duplicates the recording so that, if your input level clips the converters, you can restore it using a ‘backup’ signal path with a lower gain level. Clever!

All the hitherto mentioned interfaces are USB devices — but if you’re specifically after a Thunderbolt–compatible design, your choices are thinner on the ground. In fact, they’re limited to two: a premium, bells–and–whistles jobbie from Universal Audio, and an affordable but capable little fellow from Zoom.

The UAD Apollo Twin, like the rest of the Apollo range, has inside it Universal Audio’s much–lauded UAD2 DSP processing (about which reams have been written in this very publication). On top of that, it also includes UA’s Unison technology, which allows its built–in preamps to emulate the responses of various classic designs by adjusting the input impedance to match and also tweaking the linearity and distortion of the signal.

Other headline features include input and output metering, front–panel sockets for instrument input and headphone out, and (in addition to the two mic ins and four line outs) an optical port that can accept either stereo S/PDIF or eight–channel ADAT signals.

Last but not least, we have the Zoom TAC–2, which, at the time of our December 2014 review, had the distinction of being the most affordable Thunderbolt interface around. It’s very much modelled after the Duets and Fortes of this world, and has a similar I/O count: two mic/line ins (one of which can accept instrument signals, via a front–panel jack), two line outs, and a headphone out. There are seven–segment input meters on the top of the unit, along with a large rotary control for setting input and monitoring/headphone levels. It also has some basic DSP effects built in, allowing for ‘comfort reverb’ while recording.

So there you have it! A veritable smorgasbord of neat desktop units to serve as the hub of your home studio. Just remember to clean your desk before you install one...