This might not be the most intuitive of devices, but the Catena offers a unique and useful blend of functions...

Having worked in this industry for well over 30 years, it’s extremely rare that I find myself perplexed when confronted with a new hardware product — but that’s the position I found myself in when I unpacked SKnote’s Catena. Even trying to describe what it does presents a challenge, and SKnote’s identification label on this large 3U rackmounting unit doesn’t help that much, either: “four stereo channels, split/multi-band/mid-side unit”. Perhaps that gives some clues, but I expect you’re still largely in the dark as to what’s really on offer here.

Well, this product is intended for the mastering suite and, in essence, it is designed to connect outboard dynamics and EQ devices into a mastering signal path in various different configurations. So the Catena provides four external stereo processing loops which can be arranged either in series or parallel configurations. It also includes switchable Mid-Sides conversion, and three adjustable cross-over filters (creating four bands) to enable multi-band processing across the four effects loops. However, it doesn’t incorporate a cross-point router facility, surprisingly, so swapping the order of different external signal processors in the signal chain requires manual re-plugging on the rear panel or, preferably, via a connected external patch panel.

The electronics are housed inside a black steel case which extends roughly 220mm behind the rack ears. Besides the ubiquitous IEC mains power inlet (100-240 V AC), which includes a fuse holder and on/off switch, the rear panel is a wall of XLR connectors, comprising five separate sets of stereo inputs and associated outputs, plus four sets of stereo ‘Sends’. Inside the box are three main circuit boards, stacked one above the other in the centre of the case, with another three smaller boards attached to the three rows of XLR connectors, and a seventh behind the front-panel controls. The internal power supply uses a switched-mode OEM sealed unit which provides ±15V DC, and the circuit boards are populated with conventional-sized components throughout. All the ICs are socketed, and there’s a very large number of them: THAT Corporation’s balanced line receivers and drivers handle the I/O interfacing, while Texas Instruments OPA134 op amps take care of the internal gain stages, and the complex signal routing appears to be provided by a lot of Vishay DG406 high-performance 16-1 analogue multiplexers. The front panel’s 24-step volume control switches are festooned with arrays of discrete resistors in the traditional way, to create bespoke volume laws. 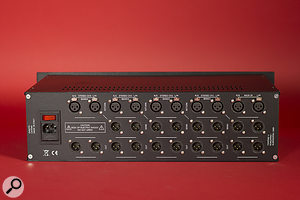 28 XLR connectors are used to hook the Catena up to the outside world.Looking at the front panel, it has a typical mastering-suite style about it, with a black panel and silver engraved control legends. There is no front-panel on/off switch, but the eight rotary switches adjust signal levels and filter frequencies (of which more later) for the five channels, and a liberal scattering of miniature toggle switches control the configuration options. Pairs of multi-coloured LEDs below each of the five level controls illuminate with varying intensity and colour to reflect the signal levels in each channel. All of these controls are clearly labelled and, individually, they all make sense but quite how they can be used together to control the signal flow is, initially at least, rather more obscure — investing some time in studying the (surprisingly brief) manual is essential if you’re to master this unusual product.

It transpires that the Catena is conceived as having a main stereo channel, plus four auxiliary stereo channels. All five are equipped with individual inputs and outputs, but the main and first three aux channels also have stereo (pre-fade, fixed-level) send outputs. The level from the main outputs of each channel can be adjusted with the corresponding large silver volume controls. The unit’s signal paths are configured with two inconspicuous toggle switches towards the left-hand side, one marked ‘Split/Multiband’ and the other with graphics to indicate serial or parallel topologies.

In Split mode, the external signal-processing chains can be set up either for serial or parallel operations. In the Series mode the source signal is connected to the main inputs, with the main channel’s Send outputs going to the first external effect/processor. The returns from that first chain are connected to the Aux 1 inputs, and are immediately made available at the Aux 1 Sends for connection to the second external processor. The returns from that plug into the Aux 2 inputs, and so on. Thus the input signal can be routed through four separate external processors, one after the other. In this configuration, there is no provision to adjust the signal levels between the external effects processors, apart from at the final output, which would be taken from the last aux channel’s main post-fade outputs. The post-fade outputs from each preceding aux channel would normally remain unused, although these intermediate processed signals could be recorded or used elsewhere.

All five channels feature Bypass and Mute toggle switches, with the bypass switch substituting the channel’s main inputs for the previous channel’s Send outputs (thus bypassing the external effects processor). The Mute switch only operates on the channel’s post-fade main outputs, so serves little purpose in this serial mode. 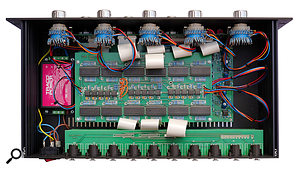 Inside the Catena: the big chips on the main PCB are the DG506 16-1 analogue multiplexers, and the little ones in a row in between are the OPA 134 op amps. The SMPS power module can be seen on the left-hand side.Further flexibility (or complexity, depending on your viewpoint!) is provided by a ‘Stereo/Mid-Side’ toggle switch below the main channel’s volume control. This introduces a Mid-Sides encoder into the Aux 3 send output, along with a corresponding Mid-Sides decoder in the Aux 4 input. This allows the fourth processing chain to be operated in Mid-Sides mode, if required.

When the unit is switched into the parallel mode, the signal connected to the main inputs is automatically routed to all of the send outputs. The processor returns are then routed through the corresponding channels’ volume and mute controls, to appear at their outputs. The processed signals can then be recombined with the original signal externally, if preferred, or mixed together and fed back into the main channel via a front-panel toggle switch marked ‘Chains Mix’. The Mid-Sides option is available once again, and inserts an encoder in the Aux 3 Send output with a decoder in the Aux 4 input, as in the Serial configuration.

A handy by-product of this parallel mode is that it also provides a high-quality analogue summing mixer, with five stereo inputs feeding one stereo output, each with individual stereo channel level trims, should such a facility be required. 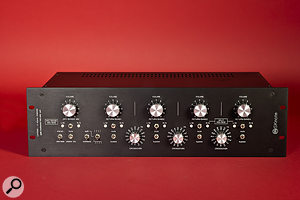 The front-panel labels have to cater for the different possible configurations of the Catena, which means they’re not always that intuitive!

In the Catena’s multi-band mode, the main stereo input is split into four frequency bands with adjustable 24dB per octave crossover filters. The three crossover frequencies can be adjusted individually via 16-way rotary switches, providing an unusually fine control to separate the bass, lower-mid, upper-mid, and high-frequency ranges. The bass/lower-mid control operates between 70 and 370 Hz, while the lower/upper-mid control spans 500Hz to 2500kHz, and the upper-mid/HF band is 3 to 12.3 kHz.

Each of these four bands is sent to the corresponding send outputs, so that frequency-conscious processing can be applied. The four band-limited processed signals are returned to the aux channel inputs in the usual way, and can be re-assembled by using the Chains Mix switch to feed the main output. In this mode, the main channel path would normally be muted, but if unmuted allows for parallel processing. 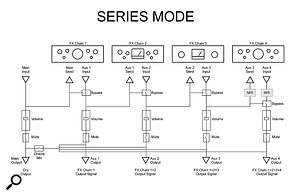 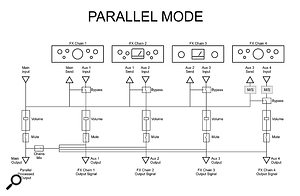 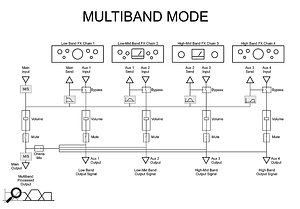 Interestingly, with the main channel muted, and the four aux channels switched to bypass (thus avoiding any external processing connections), the Catena serves as a stereo four-band equaliser, albeit a rather unconventional one! The Mid-Sides option is also available in this multi-band mode, but this time the encoder is placed into the main signal input so that all of the send outputs are M-S encoded. The decoder is placed into the main outputs to convert the reconstructed signal.

Running my standard Audio Precision bench tests on the Catena confirmed the frequency response falls to -3dB at about 7Hz, and is flat to well beyond 80kHz. The THD+N measurement is 0.015 percent (+4dBu reference) and the total harmonic distortion element of that is actually 0.001 percent. All very good for a mastering processor. However, the signal-to-noise ratio, at 76dB (+4dBu reference), was disappointing (I expected something closer to -100dB), although, as the unit seemed quite happy accepting and delivering +26dBu without clipping, the dynamic range (98dB) is a few decibels better than it could have been — though, again, I’d have expected a figure closer to 120dB for a mastering-grade product. I was also rather disturbed to find that the channel outputs on the model sent for review had an inverted polarity relative to their inputs, whereas the Send outputs had the same polarity as the inputs.

SKnote’s Catena is an interesting product that provides some unusual facilities. Although I found the front panel unintuitive at the outset, with its rather confusing markings, once I’d worked through the manual and played with the beast for a while it all made sense. The handbook is surprisingly brief and gives the impression of being written as an aide-memoir for the designer, rather than as a genuinely informative manual for the uninitiated! Some practical setup and application examples would help a lot. They say a picture paints a thousand words, but the three operating-mode block diagrams featured on both the web site and in the manual are rather confusing, too. Perhaps if they were improved, to make the various circuit paths clearer, a lot of the Catena’s functionality and operation would be considerably easier and quicker to comprehend. 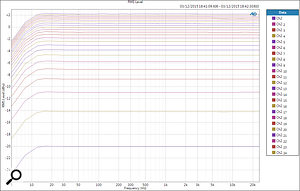 This chart shows the frequency response at every gain switch setting — so it illustrates the custom volume control law.Given the complex internal switching included inside the Catena, it seems a missed opportunity not to have included the ability to re-order — with a few button presses — the four effects-processor loops in Serial mode. Nevertheless, what the Catena does it does well, and I’m sure its combination of facilities will be extremely useful to many mastering studios.

There are a few mastering insert routing systems from the likes of Manley and Dangerous Music, and a multi-band router from Drawmer, all of which boast better specifications, but nothing else offers quite the same combination of features as the Catena.

Given the lack of detailed information in the manual or on the front panel, I prepared a few block diagrams to aid my own understanding of the Catena as I conducted the review. If you’re contemplating buying this device, these may help you!

The Catena is a unique and versatile blend of mastering router — switching four external processing chains between series, parallel and multi-band configurations — and Mid-Sides matrix, but it has a few quirks that the prospective buyer will want to consider.

$1828.78 (USD) including VAT. If it looks complicated that’s becaue it is! The company is in Italy, but as it’s main market is the USA, it lists all prices only in dollars. The Catena is $1499 USD plus taxes and shipping. VAT at the Italian rate of 22% is added to sales to EU customers