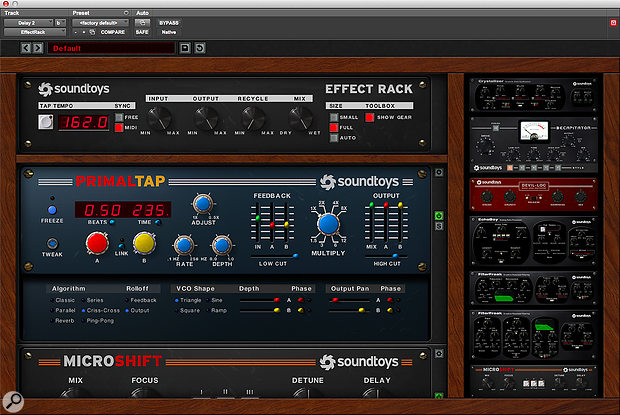 The new Primal Tap plug-in running in Sound Toys’ Effect Rack. Note how the Tweak panel is folded out from the bottom of the Primal Tap interface rather than floated above it as in previous SoundToys generations.

Where one Soundtoys plug-in isn’t enough, you can now create custom chains, with a new emulation of a classic delay on offer too.

Regular readers of our Inside Track series will have noticed that top-flight mix engineers gravitate towards a handful of plug-in developers. Foremost among these are Soundtoys, and this is not an accident: Soundtoys plug-ins really are that good. Effects like the Crystallizer granular delay, Decapitator distortion and Filter Freak filter bank don’t just sound great; they also present just the right about of user adjustment, inviting you to dive in and start meddling with the controls, yet never appearing intimidating or overwhelming. Their USP is not only the results you can get, but the speed with which you can dial in those results.

The Soundtoys range has grown relatively slowly and organically, with the company typically adding only one or two new plug-ins to their collection every year. Many of their recent releases have been inspired by vintage hardware, often of the ‘cult classic’ variety, and always with a twist of Soundtoys’ devising. So, for instance, their Radiator and Devil-Loc brought to the software world the grungy qualities of an old Altec mixer preamp and Shure compressor respectively, while 2014’s MicroShift focused on the stereo widening techniques for which Eventide and AMS pitch-shifters are widely used.

In December, however, Soundtoys unleashed a bigger update on the world. The Soundtoys 5 bundle, available for all the usual native platforms on Mac OS and Windows, includes not one but three new plug-ins. It also sees Soundtoys support the computer-based form of iLok licence management for the first time, so if you don’t want to use a hardware dongle, you can instead choose to authorise two computers directly.

The first of the three newcomers is purely a utility plug-in that makes no sound of its own. Effect Rack is, in a nutshell, a plug-in ‘chainer’, which allows multiple Soundtoys effects to be combined in a single-window environment. It couldn’t be easier to use: you simply drag and drop miniature versions of the individual plug-in interfaces from a browser on the right-hand side, and start playing. Each plug-in within the Effect Rack has a button providing access to its own presets, and it’s also possible to save and load presets which capture an entire Effects Rack. There are input level, output level and wet/dry mix controls, as well as a global Recycle parameter that allows you to feed the output of your chain back into its input. Soundtoys have also put some thought into the way automation is implemented, so not only can your host DAW see named parameters for each module within the Effect Rack, but you can freely re-order them without changing automation assignments.

Quite a few of the Soundtoys plug-ins have an extra page of ‘expert’ controls for deeper or more detailed editing, accessed by pressing a Tweak button. In previous Soundtoys versions, the Tweak panels containing these extra controls appeared over the top of the main plug-in window, obscuring the main interface. In Soundtoys 5, Tweak panels fold out beneath the main window, both in the Effect Rack and in individual plug-ins. This is a great improvement, especially with plug-ins like Filter Freak and Tremolator that have quite complex Tweak panels. I found myself using things like the rhythm editor in Tremolator much more than I ever did before, simply because it’s so much more accessible, and making it visible doesn’t stop you getting at the main controls.

It did, however, make me wonder why Soundtoys hadn’t taken the opportunity to provide a few assignable global controls along the same lines in Effect Rack. Many of their plug-ins don’t have the same complex modulation options as Tremolator or Filter Freak, and a rhythm editor or LFO that could be freely assigned to parameters in other plug-ins would be a boon.

Many plug-in chainers allow you to construct elaborate series and parallel routing arrangements, with the ability to divide an input signal into multiple paths. There’s nothing of that sort in Effects Rack, and while it would be out of character for Soundtoys to have offered us a labyrinthine modular hosting environment, I do feel that some simple splitting options would have increased its flexibility. For instance, one of Mike Senior’s favourite tricks is to use the left and right outputs of an auto-panner as separate mono inputs to different effects. Soundtoys make arguably the best plug-in auto-panner there is, so it’s a shame you can’t treat its outputs as two separate mono effects chains within Effects Rack. Nor is it possible to split an input signal into high and low frequency bands, so as to (say) apply a modulation effect only to the upper frequencies of a bass instrument.

Still, straightforward though it is, Effect Rack is nevertheless a useful addition, especially if like me you often use plug-ins like Radiator and Decapitator in series with other effects to up the grunge quotient. Perhaps its main selling point is the large variety of presets that you get with it. These are, typically, excellent: both highly usable as they stand and inspiring starting points for further exploration.

Over the last few years, Soundtoys have developed a very effective way of whetting users’ appetites for new products: most of their recent releases have been preceded by cut-down ‘Little’ versions, which are given away free for a limited time. Thus, many users may well be familiar already with the Little Primal Tap delay, but Soundtoys 5 introduces the full Primal Tap, a uniquely colourful and fun delay unit inspired by the old Lexicon Prime Time 93 digital delay. Of course, Soundtoys already make a delay that is more than capable of adding fun and colour to your music: Echo Boy, a bona fide classic of the plug-in world. But the Prime Time 93 — and, by extension, Primal Tap — has its own magic that isn’t easily recreated in a generic delay.

When the Prime Time 93 appeared in the late ’70s, random access memory was an expensive commodity. To make the most of the small amount on offer, its developers devised a clever Multiply option. This could be set to 1, 2, 4 or 8, with each setting progressively doubling the delay time at the expense of halving the sample rate. Given that the highest possible bandwidth was only 12kHz, this made the longer Multiply settings very lo-fi indeed! Additional weirdness potential was afforded by a Hold button, which looped the contents of the delay buffer endlessly, and the possibility of disengaging the delay lines from their digital clock and setting or sweeping them manually. And, despite being a digital delay, the Prime Time 93 also had an analogue VCO that could be used to modulate the delay time, generating some truly out-there effects beloved of producers such as Daniel Lanois.

As ever, Soundtoys’ homage is faithful without being pedantic. The main window presents what is more or less a complete Prime Time 93 front panel, but tidied up for ease of mousing — the original used a dual-concentric control for modulation depth and frequency, which Soundtoys have sensibly split into two separate knobs. The four Multiply options are present and correct, but much longer delay times are available in all modes, and can by sync’ed to host tempo. The VCO also spans a wider frequency range, and can be pushed to audio frequencies for ring-mod effects. Open the Tweak panel and you have access to a selection of VCO waveform shapes, new feedback modes such as ping-pong and ‘reverb’, and more.

What all this adds up to is a delay that has masses of character, but a remarkable degree of versatility too. It works very nicely for bread-and-butter echo duties, where its naturally dark and murky sound helps it to stay out of the way of the dry signal. It’s also capable of rich chorus and phasing effects, surprisingly subtle stereo widening, and an astonishing range of special effects. In and Out level controls let you use it as a distinctive overdrive, or you could simply treat it as a very rich-sounding bit-crusher. Most of all, though, you can get your hands dirty and play around with the controls while audio is passing through it. All manner of glorious swoops, dives and stutters are yours for the asking, and if I had a hardware controller in the studio, it’d be glued to this plug-in!

Soundtoys 5 also includes the cut-down Little Primal Tap that was given away free as a taster. As far as I can tell, it doesn’t do anything the full version doesn’t, but gives you instant access to the core delay and grungifying functions. However, like the other Little Soundtoys plug-ins, it doesn’t appear in the Effect Rack.

There is a reason why Soundtoys plug-ins are so widely used in professional circles, and you don’t have to use them for long to realise what it is. The clue, in fact, is in the name: these are powerful and versatile effects, but above all, they’re fun. There was little not to like about previous iterations of the bundle, and version 5 only makes them even better, with Primal Tap sure to become a highlight of many plug-in folders. Once you’ve checked out the 30-day free trial, I think you’ll find it hard to put these effects back in the box.

As well as Little Primal Tap, Soundtoys 5 includes another Little plug-in which doesn’t yet have a full-strength counterpart. Little AlterBoy is billed as a ‘monophonic voice manipulator’ with the ability to modify — and quantise — the pitch and formant of incoming audio (which, you’ll not be surprised to learn, really needs to be a cleanly recorded close-miked vocal or monophonic instrument).

Pitch can be transposed, hard quantised to the nearest semitone, or forced to a single note determined by the setting of the Pitch dial. There are no controls over factors such as retune speed or intensity, and it’s pretty clear that the focus here is on pitch-correction as an audible effect rather than invisible re-touching. To make it even more obvious, you can pile on tube-style saturation using the Drive control, and both the Pitch and Formant controls can be ‘played’ over MIDI.

Like so many of Soundtoys’ plug-ins, Little AlterBoy is deceptively capable. It provides the fastest route yet to the much-abused Cher/T-Pain sound, but can be taken in more original directions too. I look forward to seeing what the full AlterBoy brings.

One of the best plug-in collections in the business continues to go from strength to strength.