SoundToys' latest plug-in helps you spread the love — or indeed, anything else!

Creative engineers have been devising ways to add width to mono sources for many years. Sometimes you want a lead vocal or guitar solo to sound fuller and richer, so that it can sit at the front of the mix without sounding 'pasted on'. Alternatively, you might want to diffuse a backing vocal or pad, so that it retreats from the limelight.

The tools available have multiplied over time, and a new technique was made possible by the introduction of digital pitch-shifting devices. Engineers would pan slightly delayed copies of the input signal hard left and right, and shift their pitches up and down by a few cents respectively, generating a distinctive thickening effect that, unlike some, still sounded pretty good in mono.

Several plug-ins have been designed to recreate this effect, but whereas the likes of Waves' Doubler and Eventide's H3000 Factory can be quite complex to set up, SoundToys' new MicroShift is about as user-friendly as possible. It provides three 'styles' of widening; two are based around algorithms from the original Eventide H3000 Harmonizer (which were originally developed by the people behind SoundToys), while the third emulates the AMS DMX 15-80. Single rotary controls govern the wet/dry mix and the amount of detuning and delay applied, while a fourth dial labelled Focus adds the ability to apply the effect only to frequencies above a user-defined cutoff point. Like other SoundToys plug-ins, MicroShift uses iLok authorisation, but the licence can reside on your computer rather than a hardware dongle if you prefer.

If that description — not to mention the two-page user manual — makes MicroShift sound limited, the reality is anything but. With their usual acuity, SoundToys have boiled down some very complex behind-the-scenes processing (which includes emulating the analogue saturation characteristics of the original hardware units) in exactly the right way. MicroShift is thus far more versatile than you might think, yet at the same time, hard to get a bad sound from. Its applications go way beyond what you might expect, and I often ended up using half a dozen instances on different instruments in a mix.

MicroShift can do the obvious '80s Phil Collins vocal sounds and hair-metal guitar solos, but there's much more to it than that. Short delays and low detune settings produce subtle widening effects that are nevertheless very effective, while more extreme settings can generate superb chorus-style textures. The Focus control, meanwhile, really extends the usefulness of the plug-in. By setting it somewhere in the mid-range, you can explode a synth bass across the entire stereo field without affecting its low-end impact, and even on sources such as vocals and guitars, judicious use of Focus can help reduce muddiness.

A new plug-in from SoundToys is always an event, especially now that they offer 64-bit versions (including AAX format) of all their native effects, and MicroShift is no exception. It's beautifully thought-out, deceptively simple and extremely effective. Even if you've never missed having a stereo-widening effect of this sort at your disposal, try it out — because you'll certainly miss it when the demo period finishes.

As they did with Radiator, SoundToys whetted users' appetites for MicroShift by releasing a free cut-down teaser version called Little MicroShift, which provides the same choice of three Styles and a wet/dry mix control, 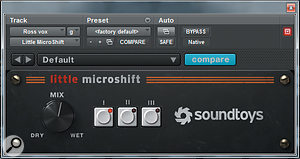 but no adjustment of delay time, detune or Focus. It is installed alongside the full MicroShift, and is perfectly usable, but since the full version is much more flexible and just as easy to use, I suspect it was included mainly so that buyers can still load projects that used the free version.

SoundToys have deconstructed a classic studio trick and turned it into a great plug-in effect.