When a technical book is republished in a second or third edition, you know it's become recognised as a reference work, but when it reaches a seventh edition, I think it's legitimate to suggest that it has become something of a 'bible'!

Sound And Recording; Applications And Theory by Francis Rumsey and Tim McCormick (ISBN 9780415843379, Focal Press) is a massive 660‑page tome that's intended to serve as a comprehensive text for all professional audio students, regardless of age and experience. The authors are both well placed to know what's required here; Rumsey was a professor at the University of Surrey — home of the only UK Tonmeister course — for many years and now runs his own consultancy, while McCormick was formerly the Deputy Head of Sound at the Royal Exchange Theatre in Manchester, and gained experience of audio electronics with Klark Teknik.

Sound And Recording was first published in 1992, with the subtitle 'An Introduction'. However, as the pro‑audio world and its technologies have evolved steadily, so too has this book, gaining its far more apposite subtitle, 'Applications And Theory', with the sixth edition. While the first imprint concentrated on the prevailing analogue systems of the day, the chapters covering all aspects of digital technology have been greatly expanded in later versions of the book. The latest edition, coming five years after the last revision, continues with that process and every chapter has been honed and updated to reflect current practices and technologies. Astonishingly, topics specifically covering analogue recording now occupy only about six percent of the book's content. However, the book grows with each new edition because, importantly, very little is discarded along the way. Rather than omit once‑important content about now‑obsolete technologies, the core information is retained and only the emphasis altered. In this way, the book preserves helpful material on antiquities like vinyl records, 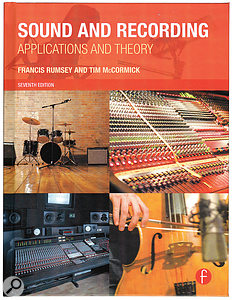 magnetic tape bias, analogue noise reduction and DVD audio, whilst simultaneously explaining the latest technologies like BluRay discs, IP audio, Class‑D amplifiers, MFiT, digital radio mics, and loudness normalisation. The chapters on stereo and surround recording techniques have been expanded further to include the latest immersive systems like Dolby Atmos, Auro 3D, Wave Field Synthesis and parametric audio coding, while the chapter on MIDI and remote control has also been updated to cover technologies like Open Control Architecture and AES64, as well as Eucon.

This comprehensive book is divided into 18 chapters, starting with the obligatory, 'What is Sound?' and 'Auditory Perception', before moving on to transducers (microphones and loudspeakers). Subsequent chapters cover mixers, analogue recording and digital principles, systems and formats (including IP‑based technologies). Power amplifiers also have a chapter of their own, as do analogue lines and interconnections — although this chapter appears much later in the book than I would have expected. Reflecting their importance in modern production, plug‑ins and hardware outboard have been given their own chapter, too, followed by MIDI and remote control, machine synchronisation, stereo and surround, and finally a chapter in evaluating sound quality. The usual index, glossary and a handy listing of 'fact files' make it easy to find specific content, and the text is superbly well written and illustrated at a level which a novice student will be able to follow easily while still providing worthwhile depth and breadth of content for the more experienced. If you want just one reference book on audio, this one is hard to beat. Hugh Robjohns