In the making of their latest library, Toll, Sonokinetic travelled to a number of European countries (and the splendidly named Museum Klok En Peel in the Netherlands) to record their church and cathedral bells. These recordings were then augmented with samples of carillons and South‑East‑Asian ceremonial bells to further expand the sonic palette. Altogether more than 600 24‑bit, 96kHz samples were made, and then converted to 48kHz to make the resulting library a more manageable 3GB.

Toll has quite a simple interface and is therefore very easy to use. The most important controls are two arrow keys that enable the user to scroll through the bell categories. They are Cathedral Bell, Tower Bells, Historical I, Historical II, Carillon Soft, Carillon Hard, Silk Road I and Silk Road II, and when one is chosen, its samples appear in a spread across the octaves of the virtual keyboard.

On the other side of the interface another pair of arrow keys are used to select one of four impulse responses that make use of Kontakt's convolution reverb. None of the four are given a name, but each has a graphic for identification. Nearby, two dials provide control over the reverb.

At the bottom of the interface there is a four‑band EQ with dials labelled Low, LM (low‑mid) HM (high‑mid) and High, and next to them is one called Tail, which attenuates the decay of the samples, some of which last for up to 30 seconds. Unlike the EQ and reverb, the Tail length can be set for each bell category, which is either welcome flexibility or a bit of a pain, depending on how you look at it.

The remaining controls are unusual in that they enable the user to decide which round‑robin variations to use and how they should play back, and therefore have a significant impact on the sound of a performance. When the RR Freeze button is selected, for example, a group of yellow keys appear on the virtual keyboard, each of which represents a single round-robin variation. Latching one of the keys ensures that its variation will play repeatedly at the expense of the others. 'Exclude' does the opposite, so if a particular variation is jarring with the rest of the composition it can be left out. The last button, Mark, makes it possible to specify which variation should play first in the sequence.

Toll offers a lot of sonic variety and is very realistic. The resonating tail of each bell has been recorded to the end, so there is no looping to spoil the illusion and the quality of the recordings cannot be faulted. 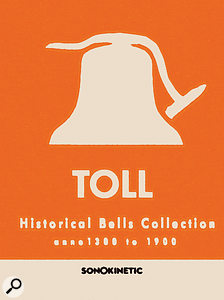 I'm not sure how many customers will recognise the sound of bells from a particular country or time period, but the differences provide vital tonal and textural variety. For dark and mellow, for example, there are the cathedral bells, while the tower bells are much more severe and bright. The historical bells are somewhere in between and the carillon options provide chromatic scales.

Countless film and television productions are sure to benefit from Toll. It may not be a vast library, but it is big enough to offer something for every occasion. It doesn't cost the earth, and most importantly of all, it sounds very good. Tom Flint