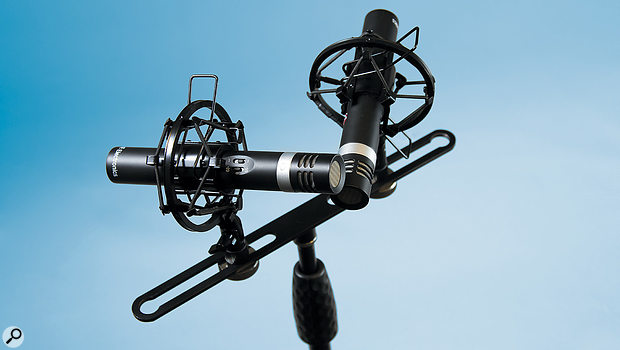 The SE5 is available either singly, or as a matched stereo pair, where it comes bundled with a stereo bar, a camera case and custom shockmounts.

With its extended frequency response and high SPL handling ability, the SE5 could prove to be the company's most versatile mic to date.

SE Electronics' new SE5 is a cardioid-pattern microphone, intended as a general-purpose instrument mic suitable for both studio and live work. According to SE, it improves on the performance of the popular SE4 microphone, but remains very affordable. Its makers say that it can be used on percussion, as drum overheads, on bowed strings, plucked strings, pianos, and just about anything else you can get through the studio door. It is fitted with a true capacitor capsule with a 23mm diameter (the capsule is removable, though no alternative capsules are offered at present), and requires a standard 48V phantom-power source to operate. Its wide frequency range allows for effective transient handling, and its choice of -10dB or -20dB pad values should help it cope with high SPLs. There's also an integrated switch to introduce a 100Hz low-cut filter.

The SE5 is available either singly, or as a matched stereo pair, where it comes bundled with a stereo bar, a camera case and custom shockmounts. Constructionally the mic is finished to a very high standard, and at around 28mm in diameter and 180mm in length, the SE5 is larger than many typical 'stick' mics, but its matte black finish helps keep it inconspicuous, which is especially important when making videos or using it for TV work. Also finished in a matte black is the custom shockmount, which clamps firmly to the microphone body to allow for secure mounting in any orientation. While the quoted 20Hz to 20kHz frequency response means very little on its own, the plots for the microphones, which are provided individually for each mic when you buy them as a stereo pair, demonstrate the level of matching and show a lack of any exaggerated presence peaks, though there is a gentle rise at the high end in the 8kHz-and-up region that would typically add a sense of airiness to the sound. These graphs are not 'smoothed' as most generic plots are, and so may appear to show up a lot of small ripples, but these are consistent with what you'd expect from a precision plot.

A very typical sensitivity of -34dBV/Pa is quoted, along with a respectable 14dB equivalent input noise level and an overall 80dB signal-to-noise ratio. With the 20dB pad engaged the mic can handle a massive 170dB SPL so I can't think of any normal musical sound source that would daunt the SE5.

Unscrewing the capsule reveals a spring-loaded centre-pin connector — a system used in many of the classic pencil mics. A profiled dip in the body houses the two switches, ensuring that they don't foul any mounting hardware. For stereo use, the shockmounts affix to two sliding, threaded inserts on the stereo bar, where the maximum separation is 275mm, allowing for both spaced and near-coincident alignments. The bar itself is again finished in matte black, while the two weighty sliding inserts are finished in chrome with a US-standard mic thread. A threaded socket (US thread again) is fitted beneath the centre of the bar for fixing to a mic stand, and a European thread adaptor is included to permit fixing to both common mic stand types.

Though I wouldn't usually pick a small-diaphragm mic for pop vocals, a spoken-word test is always revealing as the human hearing system is keenly attuned to dealing with voices and so anything that doesn't sound natural stands out quite strongly. Voice was no problem for the SE5 though, as the sound came across in a very natural way with no obvious hyping or colorations. For the acoustic instrument test, I dragged out my old acoustic guitar and, again, what came back at me over the speakers was very close to how I heard the guitar in the room.

Just out of interest I did a comparison with the low-cost SE Magneto (which I was reviewing around the same time, and which you can read about at /sos/may14/articles/se-magneto.htm). Both mics turned in excellent results on acoustic guitar, but with the Magneto being the more obviously 'flattering' of the two; its voicing tends to bring out the high-end sparkle a little more. That didn't surprise me, though, as the sE5 is designed to give a more honest impression of the sound being recorded.

For stereo work the two mics turned out to be very closely matched and delivered credible results in either coincident or spaced configurations. I didn't hear any obvious noise during any of my tests and wouldn't expect to unless recording unusually quiet or distant sound sources. Certainly these mics are quiet enough for recording such things as choirs or small acoustic instrument ensembles where their uncoloured sound would be of benefit, and they are sufficiently sensitive that in normal applications your mic preamps should be able to run well below their maximum gain. With their pads allowing them to handle extremely high SPLs, I'd have no hesitation in using them as drum overheads, or for close-miking other forms of percussion.

Given their performance, the asking price is more than reasonable, especially when you consider that the shocksmounts, stereo bar and camera case are included in the stereo kit.

With the microphone market being so crowded there are plenty of alternatives, from the low-cost Rode M5 to Neumann's premium KM-series models. You'll also find a range of 'stick'-type mics from companies such as Audio-Technica, MXL, Sontronics, AKG and many of the boutique mic companies, but the choice is somewhat reduced once you take the cost into account.

The SE5 is a very capable mic, whether used singly or in stereo pairs, and offers a good level of performance for what is quite a modest outlay.