What applications could this unusual control surface have for the studio or stage musician?

The Skoog is a tactile control interface designed to allow anyone to make music. It’s aimed predominantly at the education and special needs market — there are lesson plans and training courses for teachers available via the Skoogmusic web site — but if the Skoog is indeed intended to work for everyone, it’s worth taking a look at it from a wider perspective, including professional music making.

Although it’s a USB device, the Skoog isn’t MIDI class-compliant, so it can’t just be hooked up to the MIDI software or DAW of your choice. Instead, the Skoog is designed to be used with its own software environment, called Skoogmusic, which provides virtual instruments and a rudimentary recording environment; this program also enables the Skoog to output MIDI to other applications.

The Skoog looks like a toy, which, to be fair, is to an extent what it is, certainly when viewed in terms of its primary market. A white cube measuring about five inches per side is studded with differently coloured hemispherical bulges; four on the sides and one on top. The entire device feels as if it’s made out of foam: the bulges can be pressed, poked or squeezed, but the cubical body is also soft, and can be deformed or twisted as well. A captive USB cable is connected to the base of the unit (which is also slightly padded, but not part of the playing area).

Plugging in the Skoog produced something of a surprise: a monitor utility on my Mac announced the newly connected USB device as a Logitech SpaceNavigator, which is actually a small 3D-mouse/joystick device intended for use in computer-aided design. Without taking the Skoog apart, it’s not possible to tell exactly what hardware is inside (the folks at Skoogmusic tell me that the internal sensor is indeed built by Logitech), but it’s worth noting that a 3D mouse has a single control knob which can be moved around and twisted in space, and so the Skoog’s sensor behaves in the same way. The spherical bulges push this ‘core’ around, causing notes and controller information to be generated, but there are ramifications for polyphony: for example, two opposing sides cannot trigger at the same time.

Having quickly exhausted the possibilities of the hardware on its own, I proceeded to download the Skoogmusic software (which requires a slightly tedious registration process) and get familiar with the environment as a whole. 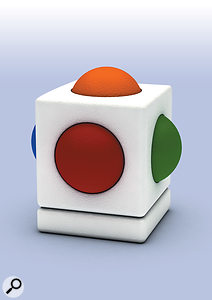 Skoogmusic is obviously intended as a one-stop shop for everything you might want to do with a Skoog. And since the Skoog isn’t a true MIDI device, you’d need the application to generate MIDI for other applications. When the application launches it puts up a welcoming ‘What would you like to Skoog?’ window with big, friendly navigation buttons. This window is somewhat superfluous, since most of the buttons lead straight to a view in the main Skoog window, and there’s a Quick Start Wizard which provides an additional introductory path into the application.

The main Skoog window provides access to the Skoog itself — a second Skoog would get an additional window — while a narrow ‘Skoogmusic’ window at the top of the screen provides global controls, reminiscent of the control bar in a typical DAW. 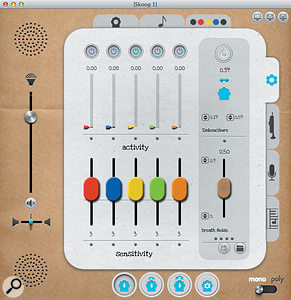 The Skoog window, with a panel showing sensitivity and triggering adjustment controls.The first panel (just called the Skoog Panel) shows which sides of the Skoog are active. (The cubical body of the device is an active surface as well as the spherical bulges, so the whole of each side is actually ‘live’.) There’s a nudge control for overall sensitivity, although this can be fine-tuned in the Settings Panel. The Notes Panel maps each surface to a particular note pitch; there’s a meagre selection of built-in scales (pentatonic or ‘guitar’, major or minor), but you can define your own, and scales can be saved to disk and re-imported. The pitches can be detuned as a whole, but there’s no microtuning per note.

The Skores Panel provides access to the sequence player, a signature feature which highlights the Skoog’s place in the educational market. Each built-in Skore song provides a graphical coloured prompt of notes which are stepped through, game-like, if you press the correctly coloured side of the Skoog — or, if in ‘Music Box Mode’, press anywhere. A nice playful feature for education, but I can’t quite see it dragging serious musicians away from their DAW of choice. 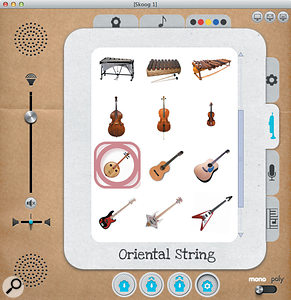 Instrument selection icons. Don’t despair: all these instruments are physically modelled.The Settings Panel is the most crucial for more serious applications, and also the most confusing, since the documentation is not too forthcoming on how all the controls operate. Each of the Skoog’s five faces has a slider for scaling pressure sensitivity and one labelled ‘activity’. It wasn’t immediately clear why two controls were needed for each triggering surface, but an email exchange with Skoogmusic clarified things: each activity control shows the (scaled) pressure, but sets an instrument-specific playing threshold. For plucked or percussion instruments, this is the trigger point; for bowed or wind instruments, it nudges the instrument towards tonality (versus, say, just breath noise) and continuous sustain. If you want some voices to drone, this is where you do it.

It should be clear by now that there’s more going on here than simple MIDI-style sample triggering. The right-hand part of the Settings Panel has a slider for instrument/playing attribute — think of this as a single axis of preset editing — and a range control for tilt/twist. (Despite its name, tilt/twist is a single modulation input generated by any twisting gesture; the Skoog is not sensitive to gravity, as ‘tilt’ might suggest.) The playing attribute varies by instrument: the flute has embouchure and breath noise, for example; the horn has lip tension and vibrato, while the marimba has strike position and beater hardness. This is a pretty big clue that we’re in physical modelling territory. As if we needed any more proof, tilt/twist gestures are also instrument-specific, and result in some pretty nice overblow/harmonic effects in some of the built-in flute instruments. 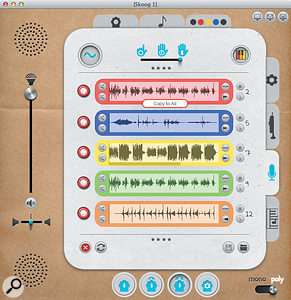 Five samples loaded, trimmed and ready to scrub.Bring up the Instrument Panel and you’re faced with a simple menu of instrument icons: click to select the desired instrument. Normally, my heart would sink at this stage as I’d anticipate a lacklustre selection of MIDI instrument samples, but the fact that Skoogmusic’s instruments are modelled makes a world of difference: the kinds of gestural control offered by the Skoog are mapped well to the synthesis models. Had the instruments just been sample-based I would have grown tired of the Skoog pretty quickly, but the responsiveness of the modelling parameters made things a lot more interesting and, yes, fun.

The Sampling Panel switches the Skoog from its built-in instruments to sample playback. Each surface can have its own sample: drag-and-drop a sample file into the appropriate ‘bin’, or live-record from microphone or audio input. (The recording mode has no level meter or progress indication, which is a drawback.) Each sample can be trimmed, transposed and reversed, and the entire setup saved to disk. The ‘Tap’ and ‘Press’ play modes are rather mundane — play-to-end, and play-while-pressed respectively — but ‘Squeeze’ enables a granular scrubbing mode which is rather more creative. Granted, audio scrubbing is hardly an innovation, and the implementation is pretty simple (there’s no control over grain size, stereo placement, or any of the features one would find in a ‘real’ granular synthesizer), but playback is potentially five-voice multitimbral, and the Skoog offers more polyphonic real-time control over several voices at once than many other controllers. Remember, though, that the hardware design prohibits all five surfaces from triggering at the same time; three is a hard limit.

The sample playback modes could benefit from some additional processing: real-time filtering and amplitude control, at least. All that’s provided across the board is a global reverb. Additionally, it might be fun to allow direct re-sampling from Skoogmusic’s output (scrubbing, or instrument playback) into the sample playing buffers. (This can be done after a fashion, but requires manual export and import.)

The final operating mode is provided by the MIDI Panel. MIDI is pretty impoverished in terms of expression as a control protocol compared to what the Skoog can generate, and the MIDI output features of the Skoogmusic application are basic, to say the least: note triggering, and a choice of modulation or pitch-bend (from tilt/twist gestures). There’s no capture of pressure from the Skoog surfaces, so modulation is strictly monophonic.

The Skoogmusic application’s feature set is rounded off by some global audio features: a recording window for capturing the audio output, and a backing-loop player. Captured recordings can be saved, or immediately used as backing loops.

The Skoog is a highly responsive and easy-to-use control surface: pick an instrument, dial up a keyboard mapping and you’re potentially good to go. However, I found that the default sensitivity and threshold values led to lots of false triggering: either spurious triggers, or entirely the wrong surface picking up a gesture. In particular, twisting the top face of the device (a pretty natural gesture) tended to fire the top orange face whether I wanted that or not. Fine-tuning the sensitivity and activity values certainly helped (as did turning off tilt/twist entirely), but there’s always going to be some risk of crosstalk between notes. And since the hardware design precludes triggering opposing surfaces at the same time, some potentially interesting gestures are not feasible.

These drawbacks aside, the modelled instruments provided by the application are expressive and sound pretty wonderful, and I found myself generating interesting musical slurs which would be difficult on other controllers. The Skoogmusic application is fine for its main intended audience, but I found myself wanting more support for some kind of integrated workflow: easy capture and editing of gestures or instrument output back into the program as source material, and some selection of audio effects. Perhaps I’m just saying that I’d want a Skoog DAW, which is unrealistic; a Skoog VST or Max For Live plug-in might be a smaller ask.

The Skoog is accessible and fun, and while I was initially a little confused by some aspects of the control program, it clearly provides a good core set of features for use in education. The modelled instruments are well realised and, given the device’s educational bias, it’s great that the Skoog developers made the effort to support true modelling, rather than just opting for multisamples

The Skoog’s potential in a professional context is less clear: while I can’t imagine performing artists immediately rushing to take them on stage (at least, not until there’s a model that comes in black), there’s potential to do interesting live, or studio-based soundscaping. All that’s really missing, in my opinion, is some further software support.

The Skoog is an easy-to-use and fun controller for educational music making. The bundled application provides some nicely responsive physically modelled instruments and supports sample recording, triggering and scrubbing.