The world’s not short of LA‑2A plug‑ins, but some are more convincing than others...

It’s only recently that I’ve really got into using Slate Digital’s Virtual Mix Rack (VMR). This DAW plug‑in (in the usual Mac/Windows formats) hosts a range of Slate’s analogue modelling plug‑ins, which you can drag and drop to add, delete and reorder. Since I last auditioned their range, Slate have added a remarkable number of emulations to this ecosystem, making VMR much more useful in the process: if you subscribe to Slate’s All Access Pass you’ll rarely need to leave it to access other developers’ plug‑ins. The latest to enter the VMR stable is FG‑2A, an emulation of the Urei/Teletronix LA‑2A tube opto compressor. To use it, you can buy it outright or sign up to the All Access Pass.

Slate claim that not only is FG‑2A the most authentic recreation of a real LA‑2A yet, but that it models the best‑sounding LA‑2A they found during extensive listening tests. It would be impossible for me to test that claim, of course, even if I had a hardware LA‑2A in the studio (which currently I don’t): how could I be sure the unit sounded like FG‑2A’s muse? A reasonable point of comparison, though, is Universal Audio’s LA‑2A Leveler collection for the UAD platform. These three plug‑ins model different specimens of the LA‑2A and earlier LA‑2, and impressed me a great deal when I compared them with hardware. They were also my strong preference when comparing a range of LA‑2A plug‑ins a few years ago.

For this review, I made a point of testing FG‑2A alongside the UAD plug‑ins on a range of material, including male and female vocals, bass guitar, a drum bus and a mix bus. But first let’s consider the feature set.

The LA‑2A is a lovely design but a very simple one, so it’s no surprise that the UA and Slate models have similar features. All have the expected Gain and Peak Reduction controls, as well as a tiny emphasis control which, as you turn it anti‑clockwise, makes the compressor less sensitive to low frequencies. UA’s GUI has switchable metering (input/output level or gain reduction) whereas the FG‑2A indicates gain reduction only. But that’s moot, since you could easily place Trim (which has a level meter) in VMR slots either side of FG‑2A and see all three simultaneously. FG‑2A has a couple of useful features that the UA plug‑ins lack: a Mix control and a Stereo Link switch. The former allows instant parallel compression, as many plug‑ins now do. The latter might not sound like much, but it really extends this compressor’s usefulness for me: unlinked stereo limiting can sound a bit wider and more exciting, as long as you don’t overcook it, but often you’ll want linked operation, so as to keep the stereo image stable.

FG‑2A sounds every bit as smooth and easy as an LA‑2A should, and it has the right character too... 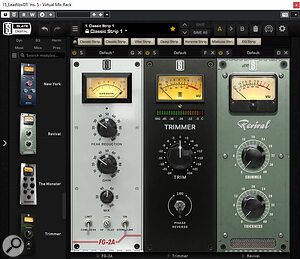 FG‑2A is hosted in the Virtual Mix Rack, which can now give you access to an impressive range of quality analogue hardware emulations.FG‑2A sounds every bit as smooth and easy as an LA‑2A should, and it has the right character too: it’s not nearly so bright and ‘in your face’ as some of the established competition, so it just feels effortless on vocals and bass, as it should. The mix and stereo link controls make it great on more complex sources such as a stereo drum or mix bus, and I loved that I could use two instances in series, either with one compressing and the other limiting, or a parallel compressor running into a fully ‘wet’ one, to control sources whose dynamic range changes in different song sections.

All else being equal, the UA plug‑ins require you to bring the Peak Reduction control down further for the same gain reduction but, generally, the action of these and FG‑2A is similar. FG‑2A sounds closest to UA’s Silver model to my ears, though the latter perhaps sounds just a touch more ‘forward’. I couldn’t pick a favourite; I might make different choices between these plug‑ins at different times. Which means that while I can’t test Slate’s claim that this is the most authentic model, I can say with certainty that FG‑2A is up there with the best LA‑2A emulations. It also added a couple of useful features and doesn’t require dedicated DSP to run. So it ticks all of the boxes for me. Recommended.

A classy LA‑2A emulation that’s easy on the ear and boasts some simple but useful functionality.