There can’t be many preamps that offer this many channels for such a low price! But is it any good?

Each preamp has a clip LED and a rotary gain control, and rear-panel switches activate the phantom power in two groups (channels 1/2 in one and 3/4 in the other). Each channel has a rear-panel output on a balanced quarter-inch jack and that’s it. No pads, no filters, no phase switches — just four basic, but capable, mic amps. 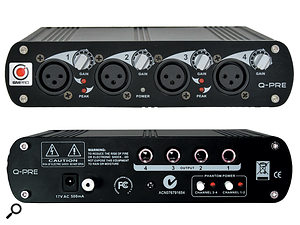 SM Pro say they developed the Q-Pre primarily as a means of upgrading the input stages on a typical audio interface. In most cases further gain can be added where necessary via the line-input stage of the device to which the Q-Pre is connected, but during my tests I found that with the gain control around half-way up on both the interface’s line input and the Q-Pre’s mic input, I had more than enough gain for speech recording using a capacitor microphone. Peak input levels of up to +5dBu can be accommodated and the maximum output level is +18.5dBu. A frequency response of 20Hz to 20kHz, +0/-2dB is quoted, with distortion at 0.02 percent and crosstalk rejection better than 70dB at 1kHz (-20dB input). The signal-to-noise ratio is 85dB.

For my subjective listening tests I ran the Q-Pre against SM Pro’s own Tubebox 500-series module (that I also had on test) and against the preamps in my own PreSonus AudioBox interface. Overall, the Q-Pre’s sound came across as airy and transparent, but lacking the valve-based flattery of the Tubebox, which added a slight but useful sense of weight to the vocals I recorded through it. It also sounded a little less weighty than the solid-state mic amps in the PreSonus AudioBox — but it wasn’t a case of better or worse, they were just slightly different. I rather missed not having low-cut switches and, being realistic, if you already have a good-quality audio interface with built-in mic preamps, I don’t think you’d hear much of a difference. But as an affordable yet capable front end to a line-only audio interface, or to upgrade one with less-than-ideal mic amps, it’s a pretty good option. An external preamp like this can also help in the event that you have a USB audio interface that’s picking up digital background noise from the USB bus at high mic-gain settings. Paul White