The DR44WL is a Wi–Fi-enabled, handheld digital recorder, which can be remotely controlled from an iPhone, iPad or Android device using an app. It records up to four tracks simultaneously, allows individual track overdubbing and has a basic mixer.

Like countless other handheld digital recorders, on its front end are a pair of cardioid condenser mics, but their design differs from those of its immediate predecessor, the DR40 (reviewed in SOS February 2012). For a start, the new mics are capable of handling SPLs of up to 132dB without distorting, making the product potentially suitable for, amongst other things, recording a loud rock gig. The designers have also had a go at preventing vibrations travelling from the body of the recorder to the mics, by setting the capsules in miniature rubber shockmounts. Pressing the recorder’s buttons and brushing its casing still creates a noise which the sensitive mics will hear, but at least decoupling the capsules reduces the unpleasant thuds that are generated when the recorder’s body, or standmount, is bashed, and this is important if the recorder is to be used (as Tascam hope it will) by filmmakers mounting it atop their cameras. Unfortunately, the shockmount design has come at a cost, as the new mics, fixed in an X-Y formation, cannot be switched to A-B, as was an option on the DR40. 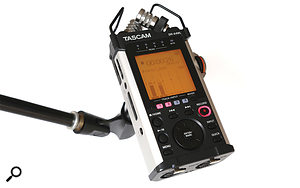 Embedded in the bottom edge of the recorder are two Neutrik XLR/quarter–inch jack Combo sockets, which supply the user’s choice of 24V or 48V of phantom power. When the recorder is used in four–channel mode, the onboard mics provide inputs to channels 1 and 2, while the combos serve numbers 3 and 4. There’s also a mode called MTR, which allows overdubbing on any of the tracks.

Other key hardware features include a mini–jack headphone output with level control, a miniature speaker for playback when headphones are not in use, a USB 2 port for transferring files to and from a computer, and a very large backlit screen. In fact, the screen looks to be about twice the height of the one seen on Tascam’s DR40, and is easier to read. It’s also notable that Tascam have switched the orientation of the on–screen level meters from horizontal, as they were on the DR40, to vertical, which not only exploits the screen’s height, but also aligns each channel with its own input–arming button at the foot of the screen, and peak–warning LED at the top. Very neat!

On the underside is the aforementioned speaker, a compartment that houses four AA batteries, a metal camera–stand thread firmly embedded in the casing, and four domed rubber feet for use when a stand is not to hand and the recorder has to be left on a flat surface.

The Input level wheel, found on the side, is the one feature that’s a little peculiar in that it’s a continuous controller instead of a dial ranging from 0 to 10 (as is usually the case). It’s designed this way because the input level is also controllable via Wi–Fi, and therefore cannot be fixed by the position of the wheel.

On the top surface, alongside the usual transport controls, is a button for accessing the recorder’s menu system. Some of the input settings, such as channel delay compensation, low–cut filtering and peak reduction and limiting, are accessed from a dedicated Input button. There’s also a button called Quick, which has a whole menu of settings to itself, including playback speed and key adjustments, and options for bouncing, mixdown and creating master tracks. The reason why some functions are accessed via the Quick key and others from the Menu button is still lost on me, but having more buttons does at least mean that menu items are reached faster, and that’s always a good thing! On that note, there’s also a Mixer button that leads to a page that features track–by–track control of pan and level, and the reverb send level. 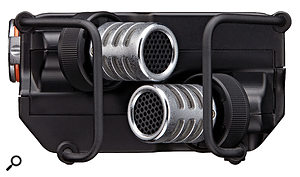 Keeping it simple: the recorder’s onboard mics are fixed in an X-Y position.The reverb in question is found over in the Menu pages, alongside other handy tools including a metronome, tuner and dual–level recording mode that saves a safe backup recording 12dB lower than the main one.

The DR44 certainly has plenty of features, then, and it’s not short of accessories either. It ships with an AC adaptor, 4GB microSD card and microSD-to-SD adaptor, USB cable, foam windscreen, grip/mic stand adapter, hot-shoe adapter, soft case, batteries and manual. I’ve never before encountered a recorder of this type bundled with a camera and mic-stand adaptor, so finding them in the box was very encouraging. However, it would have been better still if the soft case had been big enough to accommodate both the recorder and all its extras. The only thing missing, perhaps, is a case with a shoulder strap, which would allow it to be worn by location sound recordists. Given that the body of the recorder has no hooks for attaching a camera strap, a proper bag is all the more important.

For the most part, the DR44WL seems like a well–built piece of gear, but some of its features could be vulnerable to damage. The decoupled mic capsules are easy to wiggle about, for example, but their shockmounts do offer support and are firmly attached to the casing. The mics are also partially protected by metal bars, but while these are probably not strong enough to withstand a heavy blow, they will fend off routine knocks and bumps. (Clearly, it would be hard to fit anything more protective without compromising recordings.) Also protected is the Input Level wheel, which protrudes from the side of the casing; it benefits from a pretty solid metal shield.

The XLR/jack inputs are certain to get yanked when, inevitably, someone trips over a mic lead. In this design they appear to be very firmly embedded in the casing, which should divert most stresses away from the internal circuit board.

Of all the features, the large screen is perhaps the one least likely to survive a fall. It doesn’t seem any weaker than a mobile phone display, but this product’s greater weight means that it will strike with more force. Still, the advantages of a big display easily outweigh any drawbacks.

In the past, the remote controls for pocket–sized digital recorders have used either a cable or infrared beam to connect and communicate with their master. The advantage of using Wi–Fi is that an app can be employed as the controller, reducing the hardware cost and potentially offering a more flexible interface. The free app, called DR–Control, is available for iPad and iPhone at the Apple Store and for Android devices from Google Play. It gives the user full command of the recorder’s transport, levels and record/play functions, as well as access to record and input settings, and has a 20-meter range. One advantage of Wi–Fi as a remote control system is that the recorder and controller need only be within range, and not necessarily in line of sight.

Tascam are not the first to control a handheld recorder with an app, but I believe that the DR44WL is the first of its kind to offer both Wi–Fi and phantom–powered XLR inputs. The combination of features allows, for example, a live band to record themselves using external mics (as well as the onboard mics), effectively managing their FOH recording setup from the stage.

A remote connection is established by pressing a Wi–Fi button on the side of the recorder. A blue transmission LED flashes and an on–screen message asks if you want to connect to a new device. Selecting ‘Yes’, prompts the recorder to display its SSID and password. At this point the wireless device sees the DR44WL and lists it as a network option alongside other nearby routers. Communication commences once the recorder’s password is entered, and the blue LED lights up and stays lit to indicate the connection.

During the review period I had a Zoom H6 here too, so I tested the products side by side to see how they matched up. I noticed that Tascam’s new capsules are smaller than those of the H6 and the two recorders certainly sounded a little different from one another. Eventually, I concluded that the H6 had a ‘warmer’ bottom end. In contrast, the DR44 sounds more upfront and present, but exhibits slightly more self-noise (nothing too bad — similar to, or marginally better than, my Olympus LS–5). The X-Y mic configuration results in a clear stereo picture, it’s just a shame that that’s the only option available. Despite the capsule having shockmounts, handling noise remains a problem, but at least the affect of bumps and thuds is greatly reduced. 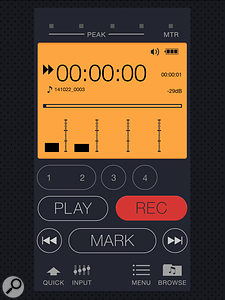 The recorder can be controlled remotely via Wi–Fi using this dedicated app, available for both iOS and Android devices.Using the DR–Control app on an iPad, I found the system became a bit flaky beyond about 10 meters, and unworkable after 14. This could be better, although I wouldn’t like to lay blame at Tascam’s door, as the iPad often loses contact with my home router!

Having used various similar devices for live music and film sound recording, I’ve come to value designs with clear interfaces, dedicated buttons for prime functions, and quick–access menus. The DR44WL certainly ticks all those boxes and qualifies as a very easy–to–use product. I found that I barely needed to refer to the manual at all during the review (although perhaps you might if you’ve not used a Tascam recorder before).

With the DR44WL, Tascam have continued their tradition of making good-quality products that are very easy to use. Cradling the mic capsules in shockmounts, increasing their SPL handling and adding Wi–Fi remote control are innovations that make the recorder particularly attractive to self–recording bands. The bundled hot–shoe adaptor shows that Tascam also hope their product will be bought by budget-film and documentary makers. It certainly has all the features that made Zoom’s H4N a popular film–sound recorder, for example, and perhaps edges ahead in terms of ease of use and the design of its onboard mics. Still, sound recordists will probably bemoan the lack of camera strap hooks. As for the large screen, it will surely be a benefit to all users. In short, while the DR44WL is not without some small flaws, it still ranks as one of the best of its kind on the market today.

There are plenty of handheld recorders on the market, but only those with phantom–powered XLR inputs can really be considered alternatives. The main competition at this point is probably Zoom’s H6, which can simultaneously record up to six audio sources at 24–bit, 96kHz, and has four types of microphone and input modules that clip on the front. Tascam’s design has fewer channels and just the one mic configuration, but is easier to use and is ergonomically superior in many ways. Other alternatives include Roland’s pricier R26 six–channel recorder and the Olympus LS–100.

The DR44WL an easy–to–use recorder that employs Wi–Fi technology to enable remote control of the device. Its new capsule design helps to reduce the effects of rumble and shocks on recordings, and the phantom–powered XLR connectors allow for even cleaner recordings when external mics are used. Other features and functions, such as the dual–level recording mode and peak limiting, also help the user to achieve fault–free recordings in a variety of circumstances.