Despite being aimed at the budget-conscious home-studio user, these speakers boast a ribbon tweeter.

Samson are perhaps best known for their ‘more bang for your buck’ products, and I have to admit that, in general, I’ve been pleasantly surprised whenever I’ve tried some of their more affordable monitors. Several companies making more expensive monitors are associated with what are often referred to as ‘folded ribbon’ tweeters, but Samson have also had good results from that technology, which appears again here in the RXA6s. 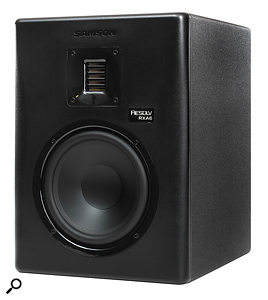 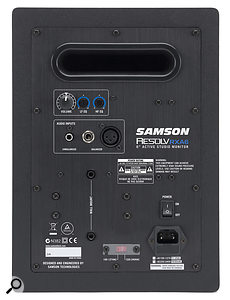 On the rear, Samsons have provided a range of different input connector types.Samson describe their version as an Air Displacement Ribbon Tweeter, and its 34 x 27 mm corrugated-aluminium ribbon is able to move four times the air of a conventional tweeter of the same frontal area. This works in concert with a six-inch woofer, built with a butyl-coated cone and slightly concave dust cap, to deliver a frequency response of 45Hz to 27kHz. Magnetic shielding is included for use close to sensitive equipment such as old-fashioned CRT monitors.

The RXA6 is a bi-amplified design (100W class A/B amplifier, with 75W for low frequencies, 25W for high frequencies), fed from an electronic crossover operating at 3.5kHz with a second-order Linkwitz-Riley response. At 8.68kg each, the speakers feel quite substantial. The housing measures 271 x 236 x 324 mm and is made from 15mm MDF with a vinyl-foil finish. It’s fitted with two M6x10 thread inserts at the rear for wall-mounting where required. The port is also located on the rear to minimise port noise. A power LED is visible on the sculpted front baffle.

All the controls and connectors are located on the rear panel, where the input is presented on balanced quarter-inch jack and XLR and unbalanced RCA phono sockets. A centre-detented knob adjusts the volume, plus there are screwdriver-adjustable high- and low-frequency shelving EQ controls (±6dB) to compensate for placement relative to walls or corners, and to adjust the HF to taste. Power is via the usual IEC socket, and the conventional power supply can be switched to work from 115 or 230 V AC mains power. In design and construction terms, then, other than for the use of a folded tweeter, the RXA6 is a pretty conventional ported, two-way active monitor. What really matters is how it sounds...

Tested on a range of material, the pair of RXA6s sounded smooth and solid, with good stereo imaging. As with most speakers, you do have to be careful with their placement — putting them too close to the surface of a desk can cause the lower mids to dominate. While there’s nothing esoteric about their performance, they do a workmanlike job of presenting your mixes without flattering them. It’s probably fair to say that they compare well with other monitors in the same price range, so they definitely warrant a place on your shortlist if your monitoring budget is fairly modest. The use of a relatively small driver keeps the mids clean and there’s still plenty of level, with an adequate low-end kick for close-up monitoring in smaller rooms, while the EQ has enough range to help you tweak the sound to suit your space. Paul White