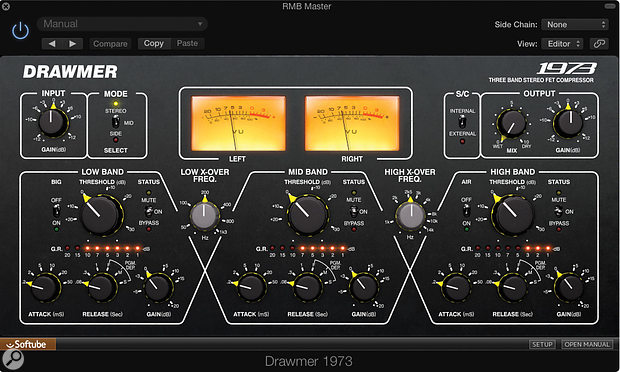 As well as modelling Drawmer’s versatile multiband mastering processor, Softube have boiled down its essentials to create an easy-to-use preset version.

Softube have a strong reputation for creating accurate models of analogue studio hardware, and one the latest additions to their range is a faithful model of Drawmer’s 1973. Reviewed in SOS July 2015, the hardware original is a sophisticated three-band, stereo FET compressor that has attracted a lot of praise for its sound and flexibility. Softube have recreated its features and user interface, but they’ve also created another plug-in called S73, which sees their engineers adding their own twist to the 1973 recipe.

In the 1973, each of the three bands has its own set of compression controls, and the crossover frequencies of the band-split filters can also be adjusted by the user. This is perfect for the experienced engineer, but can be a little daunting for the musician who simply wants to make better-sounding recordings, so Softube have attempted to simplify things in the S73 IMP (‘Intelligent Mastering Processor’) by doing away with most of the controls: all the necessary parameter adjustments are built into presets that can be varied only in the amount applied.

Both are authorised from the iLok web site, but if you don’t have an iLok USB dongle, you can authorise to a specific computer if you prefer. All the common Windows and Mac OS formats are supported, including AAX and VST3.

Drawmer’s 1973 threeband dynamics processor was described by Hugh Robjohns in his review as a costeffective alternative to the Drawmer S3, employing FETs rather than optical cells for the gain-control elements, and ICs rather than valves for its other active circuitry. Two active crossover filters split the signal into three bands, which can be independently muted or bypassed. Each band has its own set of controls for threshold, attack, release and gain, but there’s no ratio control. Whereas the threshold is fully variable, the attack and release controls are both on sixstep rotary switches, with attack time ranging from 0.2 to 50 ms, and the release time switchable between 80ms, 300ms or one second, plus a choice of three programmedependent auto options designated fast, medium and slow. Each section sports its own gain-reduction meter while the master section incorporates a make-up gain control, and a mix control for blending the compressed and dry signals.

The crossover filters have 6dB/octave slopes: the one dividing the low and mid-range bands can be adjusted from 60Hz to 1.4kHz, and the mid/high crossover is variable from 1.4 to 14 kHz. There are two toggle switches, one in the LF band and one in the HF band: the low-band Big switch engages a 100Hz, 6dB/octave high-pass side-chain filter to make the compressor less sensitive to low frequencies so more bass gets through, while the high band has an Air switch, which mixes a high-pass filtered version of the input with the compressed signal. This is a trick Drawmer have employed very successfully in previous models to prevent heavy compression from dulling transients.

Softube’s emulation follows the control layout and functionality of Drawmer’s hardware version, but in their plug-in there’s an extra three-way switch to allow either conventional stereo processing or independent Mid and Sides processing. This seemingly innocent addition actually adds a lot of creative power for stereo mix widening, lifting out centre-panned sounds and so on.

For the simplified S73 IMP, Softube have reduced the number of controls; instead, you get a choice of preset algorithms encapsulating the necessary parameter values for addressing common mix issues. The user simply chooses the most appropriate preset for the job, then adjusts the amount of processing by ear. The range of presets covers treatments for applying a gentle polish to an already good mix up to more specific processing for dealing with common mix problems. Under the hood, though, the engine is still based on the 1973. 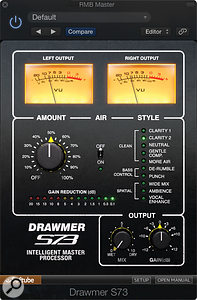 In the S73 ‘Intelligent Mastering Processor’, Softube have boiled down the essentials of the 1973 to create an easy-to-use, preset-based version.

This time, visual feedback is limited to a single, horizontal LED bar-graph meter which shows the overall amount of gain reduction, plus separate VU-style level meters for the two outputs. Again a Mix knob blends the wet and dry signals for setting up parallel compression where appropriate, and there’s an output gain control to compensate for any level lost through compression. Other than that there’s just an Air switch to add in a little top end clarity when needed, and a large Amount knob.

Down the right-hand side is a list of preset styles separated into three groups: Clean, Bass Control and Spatial; the Spatial settings, being stereo processes, obviously don’t apply if you’re using a mono instance of the plug-in. As a rule, the Clean group offers settings to improve mix separation while the Bass groups treats low-frequency issues such as unwanted rumble or lack of punch. The Spatial group can widen the stereo image, emphasise ambience or lift up vocals. In use, you just pick the one that works best and then dial in the amount you need. The manual suggests that you might wish to cascade two or even more instances of the S73 plug-in to combine different processes, for instance combining a de-rumble preset to take care of some low-end issues with one of the high-end treatments like the Clarity 1 and Clarity 2 settings, which add gentle compression and impart a sense of airiness and focus to a mix but without doing anything drastic. In fact the preset names all give a pretty good idea of what to expect, so unless you want to use parallel compression, once you’ve chosen one and set the amount, the only decision left is whether to use the Air switch or not — and even that is reassuringly subtle.

When setting up parallel compression, it is usual to employ much more assertive compression, with gain-reduction values of maybe 10dB or more, blending in just enough of the squashed signal to fill out the sound. The S73 IMP’s multiband compression is so transparent that you can probably afford to dial in more of the wet sound than you would with a conventional compressor.

The full-blown 1973 plug-in produces a very polished sound and, in capable hands, can either tackle fairly radical issues or just add a smattering of fairy dust to a track or mix. The multiband topography means that issues such as dulling or gain pumping are far less of an issue than with single-band compressors, and that M-S option adds a lot of flexibility for dealing with stereo mix issues. A degree of skill and experience is required in setting up the filter frequencies and the three compressors, but there’s nothing more complicated than you’ll encounter with any other multiband dynamics processor.

Though much simpler, the S73 IMP plug-in has an equally refined sound, offering a sensible range of adjustment without ever seeming to go far enough to actually cause any damage. All the presets do much as their names suggest, and the Clean ones are very effective in opening up a mix and adding a little HF definition without making things sound harsh. Furthermore, because this is a multiband compressor, it is possible to pile on quite a lot of gain reduction without dulling the sound or causing pumping. Punch does what it claims, adding a little more weight and definition to kick drums and basses, and this setting also works well in a parallel configuration. Perhaps the most revealing presets, though, are the stereo Spatial treatments, which rely on Mid-Sides processing in addition to compression — something the hardware 1973 doesn’t offer. I particularly like the Ambience setting, which seems to draw out reverb tails and acoustic spaces, while the widening preset also works smoothly in pushing the stereo image outside the speakers without sounding phasey or too obvious.

The more I used this plug-in, the more I came to appreciate what it could do. It is ideal as a home mastering tool for those unsure about mastering from scratch, though as with the 1973, it should be followed up with a good limiter to catch any errant peaks. Both plug-ins make great mix or bus compressors, and once you’ve used them on a drum bus, I think you might be reluctant to turn them off. I think Softube have done an excellent job, both in replicating the 1973 and in taking the essentials of this first-class hardware product to create the much simplified S73 plug-in. I can’t fault it, so let me finish with a request: while they are looking at Drawmer products, both Hugh Robjohns and myself wish Softube would make the Masterflow processor available as a plug-in. It wouldn’t even need to be modelled, as the Masterflow is a digital product — and a very underrated one at that!

It’s a great idea to model a complex piece of studio kit and then create a simplified version based on the same engine. As a result, Softube’s 1973 and S73 IMP should satisfy both experienced and less confident users.