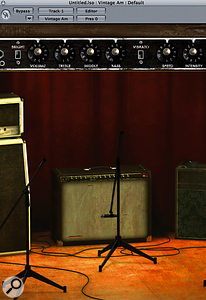 Softube are a new software company who came into being after a hacker, a guitar player and a professor collaborated on a research project at the Linköping Institute of Technology in Sweden, aimed at developing a mathematical model that could simulate non–linearities in audio equipment more effectively than existing models. What they discovered is something most engineers already know intuitively: that what the human hearing system perceives doesn’t always relate directly to the numbers measured by the test gear. Some parameters are vitally important to the subjective interpretation of a sound, while others are much less relevant, so Softube seem to have concentrated their efforts on those aspects of distortion that the ear finds important. Along the way they developed a circuit-modelling approach in which every component is individually modelled, that includes an algorithmic method of modelling non–linear devices such as amplifier tubes. They also used Infinite Impulse Response filters (IIRs) to model the resonances of speaker cabinets, microphones and rooms.

Their first product is Vintage Amp Room, a guitar amp modelling plug–in which is available in native formats for VST, RTAS and AU–based hosts on PC and Mac systems, or in DSP–powered versions for those with a TC Powercore or Digidesign Pro Tools HD rig. Unlike modelling packages that include dozens of amps, interchangeable speakers, effects and pedals, Vintage Amp Room offers just three classic amps. Although not named, these appear to be based on Marshall, Fender and Vox AC30 models, and have the same controls and features as the originals, with nothing added. You can adjust the controls and click and drag to move from one amp to the other, and the mouse can also be used to move the virtual microphone around in front of the cabinet.

Putting It Through Its Paces

I tested the Powercore version of the plug–in (running on my Apple Mac G5), which installed with no problem and also passed Logic’s AU Evaluation. Though the Powercore normally likes large buffer sizes, I set the buffer to 128 samples and could play the amp models with no perceptible latency. Operation really is simple: the plug–in window always shows a vertical third of a picture of all three amplifiers, and you simply drag to ‘pull’ the picture across and expose whichever you wish to use. The mic stand can be dragged closer to or further from the speaker, and when you push it right up close, it also turns, so you’re using the off–axis pickup pattern of the mic to get a softer sound.

A list of presets comes with the plug–in, but on my system it worked rather oddly, as whatever amp model was currently selected stayed selected regardless of which preset I called up, but the control settings for the newly selected preset seemed to be applied to the amplifier. The physical colour of the amplifier in the picture is part of the patch name, so you can easily tell which preset applies to which amplifier, but I found it rather odd that the correct amp wasn’t called up automatically. This may be a Logic or version compatibility issue and Softube are currently looking into it.

Tonally, the amplifiers really do sound very much like amps miked up in a room and, just as with the real thing, you have to work at the controls and mic position to get the best sound out of them. With the mic in its default position the high end can seem a bit gritty when you pile on the overdrive, but moving the mic further away or choosing an off–axis response pattern usually smooths things out, as well as fattening up the low end. Like the originals, not all the amp models have enough overdrive for rock, but they are designed to respond to any pedals (real or virtual) you patch in front of them in the same way as the equivalent real amplifier would. Furthermore, as none of the amps have built-in spring reverb, the sound can seem dry and sterile until you add a bit of ambience. As with most amp models, the sense of loudness and punch can be hard to achieve, because you lose the interaction between the guitar and a ‘turned up loud’ speaker cabinet, and while the sound may be accurate, it won’t necessarily give you what you’re looking for unless you add other effects or pedals — something you’d have to do if working with a real amplifier.

By way of response, the amp models have a convincing dynamic feel, so that playing quieter or backing off your volume control cleans up the sound, while the playing experience itself is much like playing in the control room with your amp set up in the live room. I compared the AC30 sound to my own Vox AD30 combo, which I tend to record by miking it up using a ribbon or capacitor mic, and I preferred the AC30 Top Boost model from the Vox amp for those jangly, on–the–edge country rock sounds, even though I suspect the Softube version may actually be more authentic. I feel this comparison is valid, as you could buy the amp in question, and a mic to record it with, for around the same price as this plug–in.

Ultimately, a good guitar sound is what works for you, and some rival products offer a greater variety of guitar sounds for less money, but if you want a plug–in that gets very close to the sound of what are unarguably the three A–list classic amps, Vintage Amp Room does a great job in a very easy–to–manage way. Of course, it isn’t always appropriate to get hung up on absolute authenticity when what you really need is a great guitar sound that works well in the track, but a good amp emulation is a fine place to start if it isn’t practical for you to mic up the real thing. Fortunately, there’s a time–limited demo that will give you plenty of opportunity to see whether Softube’s approach sits well with your own artistic vision of what constitutes a great guitar sound.

The approach of concentrating on a few classic amps rather than offering hundreds of bells and whistles is a valid one, and Softube have done a thorough job. Be prepared to use other pedals and plug-in effects with Vintage Amp Room to achieve the guitar sound you want, just as you would with a real amp in a real studio.