Hard-hitting Software. With today's sophisticated virtual-instrument technology, it's never been easier to create realistic drum performances in your DAW. Drum kits are without a doubt one of the trickiest instruments to record, especially if you're trying to record them in a home studio! Not only are they large and loud (which rules out the idea completely if you're working in a box room), but they are also very complex, radiating sound in all directions in a very unpredictable way. The latter problem is often overcome by using multiple microphones — sometimes more than one on each drum — but we don't all have a large collection of suitable mics.

Fortunately, software designers have come to the rescue, offering a variety of products that allow you to achieve professional-sounding drum tracks without even stepping away from your computer. In essence, what they've done is to set up quality drum kits in top studios with high-end gear and desirable acoustics, sample them in great detail, and build software that allows you to trigger those samples in your DAW. 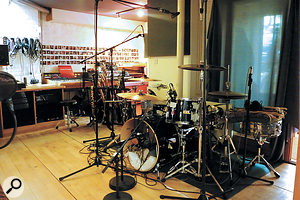 The space and equipment required to record a full drum kit live can often be prohibitive — but with the current generation of software drum instruments, it's possible to get extremely high-quality results without having to put up a single mic stand!Most such software packages also include their own complex mixing environments, so that you can adjust the level of each individual mic in the drum balance. So, whether you want a tight sound derived mostly from close mics, or a reverberant sound coming predominantly from overheads or room mics, you're bound to be catered for.

If you prefer to mix using your own favourite plug-ins and processors, however, there's always the option of outputting each mic to a different channel in your DAW. Indeed, once you've programmed or played in your desired drum performance, the mixing experience will be similar to that of balancing a professionally recorded drum kit!

Software drum instruments aren't only for those who don't have a kit or room to play them in, however. Even if you've recorded a kit yourself, you may wish to enhance the sound of your own recordings by layering them with samples that may have been recorded with a little more finesse. There are many plug-ins available now, notably Steven Slate's Trigger and WaveMachine Labs' Drumagog, that are designed specifically for the purpose of using one drum recording to trigger another.

Even drummers may have something to gain from investing in a software recreation of their instrument of choice. Indeed, many professional drummers play such virtual instruments from electronic drum kits, so that they can capture natural drum performances and have those performances brought to life with high-quality, professionally recorded samples that can be mixed according to the requirements of a production.

Before you take the plunge, however, be aware that virtual drum instruments can be very taxing on your computer: the sheer volume of samples necessitates a lot of free hard-disk space, and if you want to achieve low latencies, you'll likely also need a healthy amount of RAM.

Want to incorporate real, live drum-kit sounds in your productions without the faff of recording them? With these sophisticated software instruments, it couldn't be easier!

The latest in FXpansion's established range of virtual drum instruments, BFD3 is arguably the most comprehensive of the software instruments here. It includes a whopping 55GB of samples, all taken from multiple drum kits and including multiple articulations (one of the snare drums alone has 80 sample layers!). As well as the recorded audio, BFD3 comes with a range of preset grooves recorded by high-profile drummers, including Steve Ferrone, Peter Erskine and Brooks Wackerman.

BFD3 also includes its own complex mixing environment. All the feeds from the many mics that were used in its creation can be individually tweaked with processors such as compressors, EQs, gates and reverb. Alternatively, you can send the individual mic signals to different channels in your DAW, so you can mix the drums as you would a real kit, with your favourite plug-ins.

As well as its 60GB of audio (condensed down to 20GB through some cunning data compression), Toontrack's Superior Drummer 2 includes the playback engine, EZ Player Pro MIDI loop manager, five plug-ins, and Toontrack Solo, a host program for Toontrack's EZ range of instruments that lets you play them in 'stand-alone' mode without a host DAW. As standard, the SD2 library comes with three kick drums, seven snares, three hi-hats, five toms, six cymbal setups and a cowbell, and you can expand these options thanks to the various optional add-on packs that Toontrack sell. Superior Drummer 2 also comes with a fully featured mixer and a user-friendly drum-kit construction interface, and has a useful Bounce function which turns your drum parts into complete multitrack audio files.

For people who value ease of use, Toontrack also make EZ Drummer, which has a simplified interface and a less bewildering array of options. EZ Drummer has just received a major update, which you can read about in this month's news pages.

XLN tout Addictive Drums as being a less resource-hungry alternative to some of the multi-gigabyte RAM hogs that occupy the market. Consequently, it includes 'only' three drum kits, but the models presented are not to be sniffed at: Tama Starclassic, Sonor Designer and Drum Workshop Collectors Series are all playable out of the box, and there's a wide range of add-on packs available to buy separately.

Despite its sub-2GB footprint, XLN Addictive Drums still offers separate outputs, multiple mics and adjustable room-mic positioning, as well as a 'snare buzz' slider, for tweaking the extent to which other drums make the snare wires rattle. It also has a built-in mixer, with adjustable level, pan, insert and send effects.

NI's Abbey Road Drummer range is unusual among the instruments here, in that it deliberately isn't versatile: the libraries are named after decades (including the '50s, '60s and '70s), and are intended specifically to give you a 'dated' drum sound. The Abbey Road 60s Drummer pack has proven extremely popular, thanks, no doubt, to a certain Liverpudlian band!

60s Drummer was recorded at Abbey Road's Studio Two, where the Beatles recorded the vast majority of their work. The drum kits used are also authentic to the time, being an early '60s Gretsch Round Badge set and a Ludwig Hollywood kit from the later part of the decade, and even the recording chain is intended to capture the '60s vibe: EMI valve and solid-state consoles were used, as were classic mics from the likes of Neumann, Sony and AKG.

SSD4 Platinum is Steven Slate's premium entry to the software-drum fray, boasting 100 different drum kits spanning genres from rock and metal to funk and jazz. Among the many kit options available are 'signature' instruments, which aim to provide the drum sounds of specific artists, and even some specific albums. Bands whose names grace these signature kits include the Red Hot Chili Peppers, Nirvana, Pantera and Led Zeppelin, to name but a few.

As well as giving you a huge choice of acoustic kits, SSD4 offers five electronic drum sets suitable for use in urban, dance, house and electro genres. These have been created by producer Griffin Boice, and feature extensive studio treatment using a range of 'boutique' analogue gear.

Arguably the 'Rolls Royce' of software drum instruments, Ocean Way Drums was recorded at the very studio from which it takes its name, by legendary engineers Allen Sides (also the studio's owner) and Steven Miller. The samples were recorded in Studio B, using Ocean Way's legendary mic collection, with up to 13 mic sources for each kit being freely mixable.

To give you an idea of the flexibility on offer, the snare drum alone was captured with six different close mics: two AKG C12As, two Shure SM57s and two Sony C55Ps! The instrument also has snare-on and snare-off modes, controlling the sympathetic resonance of the snare when other drums are struck.

For owners of Roland V-Drum kits, the MIDI mapping is extensive: both snare and cymbals benefit from three-zone triggering (centre, middle and rim), and the hi-hat pedal can control the 'openness' of the hi-hat cymbal, from fully closed to fully open with seven stages inbetween. 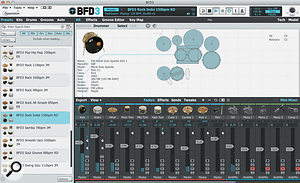 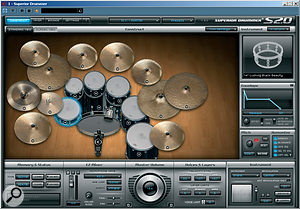 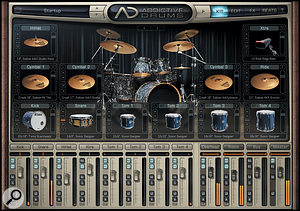 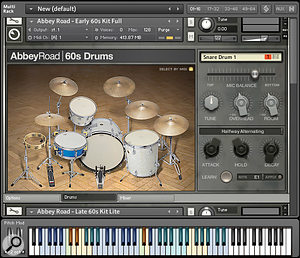 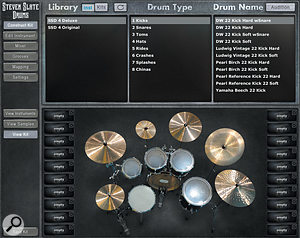 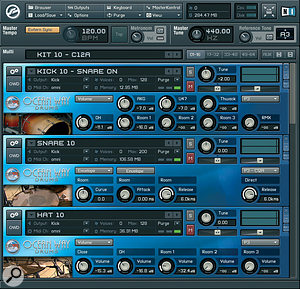