There's no shortage of active monitors in this price range. Do Samson's latest Resolv series speakers have what it takes to stand out?

This latest SE incarnation of the Samson Resolv monitor range is essentially an evolutionary step up from their Resolv A-series speakers, with the aim being to offer greater accuracy and updated styling. There are three models in the series, with five‑, six‑ and eight‑inch bass drivers. Where greater bass extension is required, any of these can be used with the optional Resolv 120A active subwoofer.

There's nothing particularly radical about the basic paradigm — the Resolv SE8 is an eight‑inch, two‑way, active speaker system housed in an 18mm front‑ported MDF cabinet fitted with a non‑slip base. Its soft‑dome tweeter sits in a shallow waveguide to control dispersion and to time-align the acoustic sources of the two drivers. A moulded baffle insert provides both the LF driver trim and the waveguide shaping for the tweeter, the latter being covered with a perforated metal grille to protect the soft dome from damage. Other than that, the cabinet is tidy but unfussy, with a black plastic‑foil finish to the sides, a painted baffle and slightly rounded corners to help cut down on 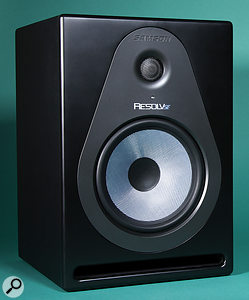 At the bottom of the baffle is a shallow, slot‑shaped port with rounded edges to reduce wind noise, which can be problematic at high SPLs with some port topographies. Magnetic shielding is fitted to allow use close to CRT monitors and other sensitive equipment, though solid‑state flat screens are not affected by the level of magnetism produced by a typical loudspeaker.

All the usual mains and input connections are to be found on the rear panel, along with EQ switches for tailoring the sound according to taste and placement. Four HF settings are provided, though there's no LF adjustment, which is often included to allow for balancing the low end when placing speakers close to walls or corners. The input gain is adjustable, and a white LED illuminates when the speakers are powered up. Note that the speakers are available individually as well as in pairs, so they may be used in either stereo or surround setups.

The use of a woven carbon‑fibre woofer cone seems to have paid off here, insomuch as the damping it provides helps produce a well‑defined, fairly dry bass that has depth but with little sign of 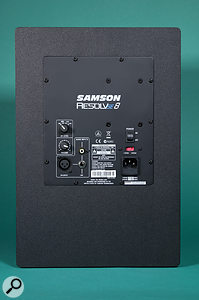 The rear panel plays host to a continuous input‑level knob, and a four‑way HF response selector. the boominess exhibited by many budget ported speakers. This is balanced by a detailed high end, and though I felt the tweeter voicing was just a little on the edgy side, setting the HF control to ‑2dB worked really well in my room to provide a creditable level of overall focus and resolution. I found the stereo imaging to be extremely good, with a useful sense of front‑to‑back perspective, while the clean bass end made it easier to concentrate on what was happening in the crucial mid‑range area of the spectrum.

Clearly there are always compromises when it comes to producing speakers at this very affordable price point, but in my opinion the designers have made good choices here, so although better speakers may have more sonic finesses, the Resolv SE8s tick all the right boxes when it comes to the key elements for a useful monitor, including being able to provide adequate level while staying clean and clear. I would have liked to have had some degree of LF adjustment, but in a typical setup where the speakers are spaced a little way from a wall and not too close to the corners, the existing voicing works well. Given their very attractive price, I was rather impressed, so do add them to your 'must try' list if you're looking for a cost‑effective monitor.

The market is currently awash with 'affordable but decent' two‑way active monitors, but at this end of the price spectrum consider the equivalents from Fostex, Presonus (particularly the Eris series), Tannoy and Behringer.

An affordable eight-inch monitor with a cleaner low end and better overall detail resolution than expected for the price.