Don't let its low price fool you: Sonic Academy's debut synth has a lot going for it... 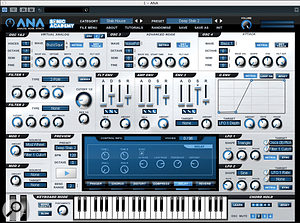 If you've been around computer-based music making for any length of time, you'll know that the world is not short of virtual synths. Do we really need another one? Sonic Academy obviously think so, having launched ANA. But what can a new soft synth do to stand out in an increasingly well-populated crowd? Well, an attractive price is a good start, and at £49.99, ANA certainly ticks that box. So, given the budget price, how well does ANA actually perform?

The envelope options include the interesting Graphical Envelope, which allows users to define their own envelope shapes.

ANA is available for PC and Mac in VST and AU plug-in formats and in both 32- and 64-bit versions. The name ANA is not simply a shortening of 'analog', but is instead an abbreviation of Analog, Noise and Attack, which derives from the oscillator options provided. Let me explain: the four oscillators support over 50 different waveform types, including the standard saw, sine and triangle types, but also plenty of more esoteric offerings such as 'bigstem', 'cheap choir' and 'guitarloop'. The first two oscillators are fairly conventional but Oscillator 3 allows you to blend in different noise types while Oscillator 4 can be used to blend in the attacks of real instruments such as guitar, strings, bell, piano and bass. There are two filters that can be run in series or parallel and feature 13 different filter types, and ADSR envelopes are available for both the filter and amplifier section. There are two additional envelopes — one a standard ADSR format and the other a rather interesting graphical affair — both of which can be assigned to a wide range of different parameter targets.

Further sound-shaping is available via two low-frequency oscillators and two modulation sections, all of which can address the same range of targets as the envelopes. And when you add in the effects section, with phaser, chorus, distortion, compression, delay and reverb options, it's easy to see that there are plenty of programming possibilities on offer, and that's without even mentioning plenty of other details that I don't have space to cover here.

There are plenty of options for modulation and LFO targets.

My own testing was done on my Mac system, using Cubase 6.5 as a host. In the main, ANA behaved flawlessly during the review period and perhaps the only obviously functional criticism is that it can be a bit greedy with CPU (although I was supplied with a minor update during testing which did improve matters, so Sonic Academy are obviously working on this). That said, most complex soft-synths can chew their way through a fair number of CPU cycles, so this isn't something only applicable to ANA.

Some 250 presets are supplied, organised into a number of categories covering House, Electro, Techno, Dubstep, Atmospheres, Pads, Strings, Risers, FX and Drums. As suggested by these categories, the sounds are aimed at electronic music styles. In particular, I liked the patches in the House and Dubstep categories. The former includes some excellent bass, 'stab' (great for staccato-style chords) and lead sounds, while the Dubstep basses demonstrate the programming potential, as there is plenty of wobbly, pitch-shifting action going on. Even before you begin to program your own sounds, the presets prove that ANA sounds very good indeed. It can do shimmering and delicate, but also powerful, punchy and speaker-cone threatening — the choice is yours.

A useful function is the chord hold feature, which allows you to pre-program a chord of up to five notes, which is great for the aforementioned House chord stabs. There are several presets that illustrate this feature.

Within the effects section, the Distort effect includes a useable amp simulation and can create a range of distortion types to add warmth, fizz or crunch.

New users should expect to spend a little time getting to grips with ANA's programming possibilities. That said, configuring the various filters and envelopes is reasonably straightforward. Of course, the effects of filters and envelopes in terms of sound shaping depend upon how the oscillators are set up. The two standard oscillators are easy enough to work with, but the noise and attack oscillators really do add some excellent extra flexibility. The attack oscillator can really give a sound some initial punch or edge to cut through a mix.

Aside from trying to deconstruct the various presets, if you need an introduction to the basics of ANA programming, Sonic Academy have a series of tutorial videos available on their web site. These are pretty much essential viewing, as ANA is not supplied with a written manual, but they are very informative and provide good demonstrations of what the synth can do.

ANA also includes a 'randomise' function that can generate new presets. This works well enough, but it is very hit and miss. Absynth's 'mutate' option — which adds just a touch of randomisation to the existing sound — strikes me as a more useful approach. Perhaps this is something Sonic Academy could add in a future release?

Incidentally, with all this programming capability, ANA is a prime target for automation (filter-sweep clichés, anyone?). There is no 'MIDI learn' function built into the synth, but, as most modern DAWs provide their own means of automating parameters within virtual instruments, this is not such a big deal, and ANA worked absolutely fine with the Cubase Quick Control system during my testing.

If your system is already stuffed with more virtual synths than you can possibly play in a lifetime, the thought of another one might not set your pulse racing. However, the bottom line is that as well as being a versatile and highly programmable synth, ANA sounds really very good, and at this price it won't break the bank. Yes, it is cheap, but it's a long way from being nasty. If dance and electronic music styles are your thing, it's most certainly worth giving ANA a spin.

The soft synth market is, of course, a crowded one, covering all possible price points. For a slightly different take on synth programming, Rob Papen's Blade might be worth considering, while IK Multimedia's Sonik Synth 2 and (for dubstep fans) Sonivox's Wobble are a little more expensive, but also worth a look. If price is less of a concern, NI's classic Absynth 5 is also highly programmable and can generate a very wide palette of sounds.

If you want a highly programmable synth for dance and electronic music styles, and one that won't burn too big a hole in your pocket, ANA punches well above its weight.