With user-configurable valve stages, the option of transformer-coupling and more besides, Sonic Farm's preamp provides a broad palette of tonal options.

Canadian manufacturers Sonic Farm are based in Vancouver, but founders Zoran Todorovic and Boris Drazic met when they formed a band in 1966 in (the former) Yugoslavia. After a decade building and running their own studios, the civil war drove them to independent ventures in America and Germany, before being reunited in Canada in 2009. The company philosophy is "to do whatever helps get the right tone, without giving in to any hype”, and they are very happy to use valves, transistors or op-amps provided that "the results are subjectively remarkable”. It sounds like a very good plan to me! Sonic Farm currently make three products: a valve DI box (2DI4), a stereo line-level conditioner (Creamliner), and the Creamer mic preamp.

The Creamer was designed specifically to introduce creative coloration to microphone signals through hybrid technology, carefully blended to form a cohesive but versatile whole. Deliberately coloured preamps provide an antidote to the perceived 'sterility' of digital recording, but there's 'good coloured' and 'bad coloured'. The trick, of course, is to find the right blend of properties that delivers subjectively 'good' sound colorations. The Creamer is based on a configurable valve circuit (triode or pentode) with an input transformer, a solid-state buffer, and selectable solid-state or transformer output coupling, a combination that allows the sonics to be shaped in four distinct ways.

Available in two primary forms, the Creamer Plus model incorporates dedicated rear-panel transformer-coupled line inputs and some additional tone-shaping EQ options, which are omitted from the Standard version. The red front panel of both units is distinctive and attractive, with white-edged black ovals denoting the two channel sections, and clear white labelling. The controls for each channel comprise eight sturdy push buttons, five miniature toggle switches, and a shiny chicken-head knob.

Mic and line inputs are connected on rear-panel XLRs, and unbalanced instrument inputs are via front-panel quarter-inch jacks. A Line/Inst button selects the line input unless an instrument is plugged into the front socket (this button is labelled Hi-Z in the Standard version). Phantom power is also switched from the front panel, as is a 15dB pad for the mic input. The latter plays an important role, as the input signal level affects the sound character of the Creamer's valve gain stage.

An oversized 1:10 ratio Cinemag mic-input transformer is employed for its high saturation threshold as much as its sound character, while the line input uses a separate 1:1 transformer. The instrument input goes directly to the valve, with an input impedance of 2.2MΩ.

The rear panel sports separate line and mic inputs on balanced XLR connectors. When purchasing, the customer can specify a 110 or 240 volt PSU, for US or EU use, respectively.

The mic transformer normally provides 20dB of gain, but a front-panel button, labelled +6dB, reconfigures its windings to drive the valve a little harder, if desired. The side-effect of this reconfiguration is that it simultaneously decreases the impedance by a factor of four and, since the Creamer offers three input impedances from a front-panel toggle switch anyway, there are six impedance options in total. The nominal options are 900Ω (low), 2.4kΩ (medium) and 10kΩ (high) as standard, while engaging the +6dB mode provides 225Ω, 600Ω and 2.5kΩ instead. Selecting the input pad fixes the input impedance at about 2.5kΩ. Different input impedances affect the tonality of most dynamic and some transformer-output capacitor mics, so this can be thought of as another creative tone-shaping tool.

An EF86 (low-noise pentode) valve fixed-gain stage operates in Class-A with negligible negative-feedback, and the circuit is switchable between triode and pentode configurations for different distortion characteristics. With minimal negative-feedback, the inherent non-linearity produces quite significant amounts of distortion — which is all part of the intended musical coloration. In triode mode, it provides a modest 14dB of gain, rising to 21dB in pentode configuration. However, a 'Gain Up' button bypasses the valve's cathode to increase the gain by 4.5dB (triode) or 9dB (pentode), and in the Plus model the cathode circuitry also includes switchable inductors and capacitors to provide two gentle LF (Fat) and two slightly stronger HF (Air) shelf boosts. The Fat settings deliver boost from 400Hz or 600Hz, while the Air boost is from 2.2kHz or 7kHz. The amount of boost is normally 4.5dB in the triode mode and 9dB in pentode mode, but these can be reduced via internal trim pots if required. Setting the Fat and Air toggle switches to their midway positions provides a flat response, and this EQ is also disabled when Gain Up is selected. The line and instrument inputs provide up to 13dB of gain in triode or 20dB in pentode modes, and unity gain is achieved with the level knob at about 12 o'clock and 10 o'clock, respectively.

A continuously variable attenuator sets the level feeding the Cinemag output transformer or discrete complementary-transistor balanced output driver, the rear-panel line output being derived from one or the other via a front panel push-button. The Plus model I received for review was equipped with an extra toggle switch, marked 0 and +6dB on the review model, that was supposed to reconfigure the output transformer. The manual claimed that it provided an additional 6dB of gain on the transformer output, but in fact it delivered a whopping 16dB boost regardless of the output mode selection. As we were going to press, Sonic Farm told me that they've revised this on current production models, so that this switch instead offers 0, -6 and -12dB attenuation, which seems more useful. The output transformers fitted in the review model ('Creamer A') had Ni-Fe cores, but a steel-cored option ('B') is available, or you can have one of each in the two channels ('AB'). The final push-button implements a polarity reversal at the output.

Overall, the maximum possible gain is a mammoth 74dB in pentode mode and 60dB in triode mode (this remains the same on the version with the reassigned toggle switch), while the minimum (with the level knob fully up and only the pad selected) is 25 and 18dB, respectively. The rotary level knob allows the signal to be faded out completely, if required. The overload LED comes on with a mic input (pad selected) of an impressive +21dBu for the triode mode, and +4dBu for the pentode mode, but by then the output is +29dBu with around two percent harmonic distortion! The maximum rated output is actually +22dBu, at which level there is around 0.7 percent distortion, while with a more typical +10dBu output the THD+N figure is nearer 0.2 percent. In general, the pentode mode contains more higher-order odd harmonics than the triode mode. Signal-noise ratio was 108dB (A-weighted) and the noise floor averaged -82dBu.

Just to complete the front panel description, a bi-colour LED provides simple level metering, showing gain-stage overload (red), and a progressively brighter signal-present indication (green), which starts to illuminate about 43dB below the overload level. A blue LED next to the Tube Mode button indicates the presence of the heater supply voltage, and serves as a power-on light. A large, round mains-power rocker switch is on the right of the front panel, while the rear carries an IEC mains inlet, fuse holder and ground-lift switch. The unit is wired for 115VAC or 220-240VAC mains supplies at the factory, and overall power consumption is given as 30W.

The Creamer provides four distinct operating conditions: triode or pentode, with solid-state or transformer outputs, plus options to vary the drive level into the valve and into the output transformer. A lot of valve preamps are 'one-trick ponies', but the Creamer offers several genuinely useful and distinct tonalities. The pleasing pentode coloration retains a sense of natural presence and detail, while sounding a little brighter, with a tad more transient emphasis, than the triode mode, although the latter still sounds immediate, clear and very musical. Selecting the output transformer adds a little more 'iron' and weight to the sound, providing a useful alternative to the solid-state output, although it is sensitive to the load impedance (as all transformers are).

This isn't what anyone would call a 'clean' preamp: it's not like a GML or a Grace Design, not even at the gentlest settings — but it is always wonderfully appealing and musical, adding a relaxed sense of life and character to every source. The more I used this preamp and compared it with my familiar references, the more I became aware that transients seemed to be enhanced in a subtle but interesting way, too — probably because of the minimal negative feedback. Electric guitars and keyboards (miked or DI'd), percussion, drums, voices — everything took on a pleasing, larger-than-life character and became somehow more satisfying and organic.

Using the Creamer Plus as a mix-bus 'processor' was remarkably beneficial, too, as it introduced a lovely character and body to DAW mixes — and with so much headroom on the mic input (and a 10KΩ impedance option), you even have the choice of line or mic input transformers too!

In short, then, I was genuinely impressed with the tonal versatility and musical quality of Sonic Farm's Creamer Plus and, if you want a high-quality preamp with a flexible character, I can highly recommend it.

The UK price of the Creamer Plus places it in direct competition with the likes of the Thermionic Culture Rooster and Demeter VTMP2C valve preamps, as well as the solid-state Phoenix Audio DRS2 and Buzz Audio MA2.2 preamps. 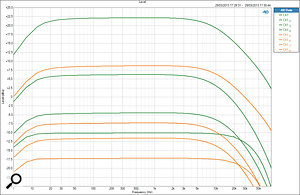 A set of frequency plots showing the relative gains and responses for pentode (green) and triode (orange) modes. In each set, the lowest curve is the minimum gain (with the rotary control fully up), and progressively higher curves obtained by engaging the +6dB input transformer option, Gain Up mode, and output +6dB option. 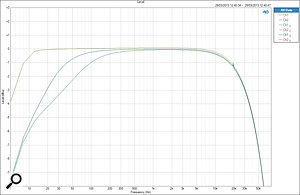 A wide bandwidth plot showing the overall response of the Creamer Plus, along with the two high-pass filters. 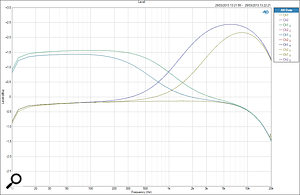 The frequency responses (on an exaggerated amplitude scale) of the two FAT and two AIR EQ modes. 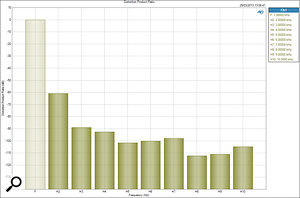 The balance of distortion product harmonics at 0dBu output level in pentode mode, producing around 0.1 percent THD. This has noticeably stronger higher odd-order components than the equivalent triode mode plots. 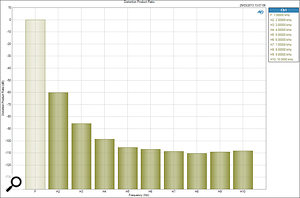 During the course of his review tests on the Sonic Farm Creamer, Hugh used an Audio Precision Analyser to take a number of measurements. Some of the plots are shown here.

The Creamer Plus is an unusual preamp that has been skilfully designed to introduce variable musical distortion that can enhance the sonic character of virtually any source. The controls are unfamiliar, but afford a wide range of tonalities when mastered.