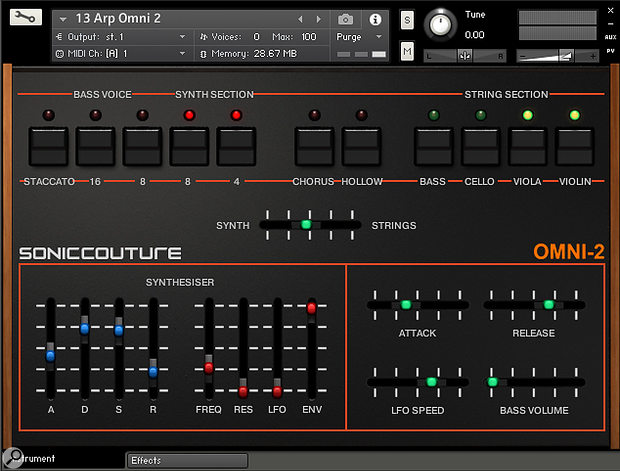 It's been five years since Soniccouture released the original Attic but, perhaps because its selection of 10 instruments was a bit too eclectic, it never seemed to attract the attention it deserved. But my interest was greatly piqued when the company released The Attic 2. This retains all 10 of the earlier instruments but adds eight more, including some important vintage instruments as well as further obscuria. None of these are physically modelled. Instead, they're based upon libraries of 24-bit, 48kHz note-by-note samples modified by digital filters, contours, modulators and effects within Kontakt. This means that there's little point comparing them forensically with the originals; while the underlying tones should be accurate, the sounds obtained after shaping may not. This is especially true when you discover the extra panels of 'inauthentic controls' provided on some of the instruments. These provide facilities that weren't present on the original instruments, although I have to credit Soniccouture for resisting the urge to extend them too far, thus compromising the characters and quirks of the originals.

The first of the new instruments is sampled from an ARP Omni 2 (shown above). Unfortunately, it doesn't emulate the operation of the original entirely accurately. The major difference lies in the implementation of the Chorus button. On an Omni 2, this slows down the phasers that create the ensemble effect and redirects the output from the synthesizer section through them and then through the string section's VCA. In Attic 2 only the raw 4' synth wave is passed through the phasers in this mode, which means that you can't recreate many of the sounds of the original. It also has a few noisy samples. Listen to the viola and violin samples under G6 and G#6 and you'll hear something that sounds much like a protesting VCA. There's also a hum that's audible if you play notes that don't mask it. The instrument can sound great and it's fully polyphonic rather than offering just the paraphonic response of the original, but I recommend that Soniccouture revisit it. The Omni 2 deserves better.

Next comes the Cheetah MS800, perhaps the most unfathomable synthesizer ever released. To emulate it, Soniccouture have sampled 26 of the 50 factory patches and then added a resonant filter and a velocity-sensitive contour generator that affects both the loudness and the brightness of the sound. Sensibly, no attempt was made to burrow down into the underlying layers of the MS800 nor to recreate its wave sequencing, cross-fading, and arcane wave contours. But this doesn't mean that the resulting sounds are constrained to uninteresting beeps; some timbres evolve radically if you sustain them. Unfortunately, holding notes indefinitely can also reveal the occasional glitch or loop-point error — for example, there's an obvious bump when you play F6 in preset 06. Happily, a few minutes spent within Kontakt's Wave Editor sorted this out. Ultimately, the Attic 2 version represents a tiny fraction of what the MS800 was (or should have been) but provides an unexpected and welcome taster of one of the world's most arcane synthesizers.

There's a lot here that will be both fun and useful for aficionados of vintage keyboards and synth arcana.

Many years ago I owned a Crumar DP80, so I was delighted to see that one has been included here. It offers the same underlying tone and the same unusual but useful dual-mode, dual-filter structure. However, like some of the other instruments in The Attic 2, it also incorporates several features that were not present on the original. These include routing velocity to both the amplitude and brightness of the sound, auto-panning, and an extra page in the filter section that offers a programmable ADSR contour and key-tracking. I no longer have any Crumar pianos against which to compare it, but this instrument conjures the same emotions as my original DP80, which range from disdain (let's face it, most analogue piano sounds in the 1970s were almost uniquely awful) to something along the lines of, 'oh... that's surprisingly nice and I think that it will actually be useful'. Take advantage of the extra features and I suspect that you'll find a place for this. 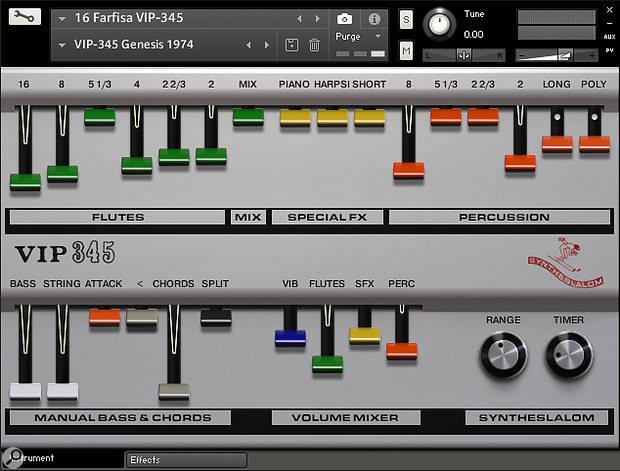 The Farfisa VIP 345 was never a popular instrument, which is strange because it's a remodelled Farfisa Professional, a much more sought-after beastie. As elsewhere, the Attic 2 recreation is an approximation rather than an exact copy because the drawbars are smooth faders rather than multi-position switches, there's no percussion repeat function, and the Syntheslalom is implemented differently: on the original, the effect was imposed upon all notes whenever you played a new one, but here each note is independent of all the others. These differences aside, the instrument captures much of the Farfisa sound. It's a bit more polite than the original but, to be fair, Farfisas are incredibly difficult to recreate because, when you mix footages, everything interacts and distorts in exactly the way that layering multiple samples doesn't. But play the Attic 2 instrument through suitable effects and it can sound gorgeous, producing everything from the reedy timbres of transistor combo organs to the sounds of psychedelia and the snarling swirls that you more readily associate with large console organs. 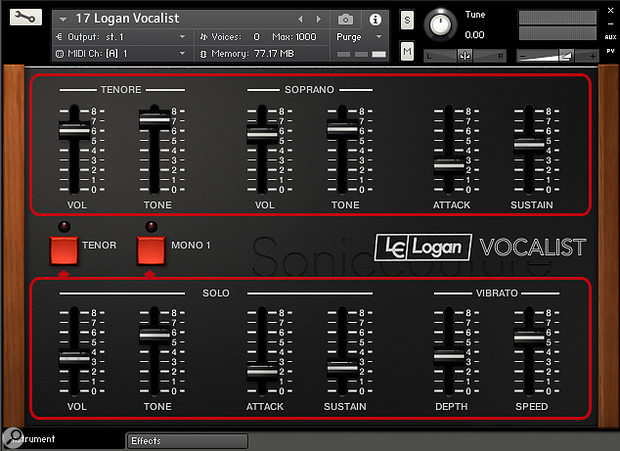 Soniccouture describe the Logan Vocalist as "pure Unobtainium". This isn't far from the truth, and the chances are that you've never seen or played one. Nonetheless, the Vocalist is an interesting instrument and, happily, the Attic 2 greatly increases its pitiful three-octave range and six-note polyphony to make it a genuinely useful instrument. The voices are nicely captured, and in each case their formant filters emulate the original quite well. However, there seems to be an error in implementation. On the Logan, there are two mono modes: one in which the Solo voice is layered with the top note of any chord being played, and a second in which the top note plays the Solo voice alone. On the Attic 2, the Solo voice is layered in both modes. Since there are no instructions regarding the Vocalist in the manual, I have no idea what Soniccouture intend the distinction between Mono 1 and Mono 2 to be. Not to worry, it's still much more useful than the original. 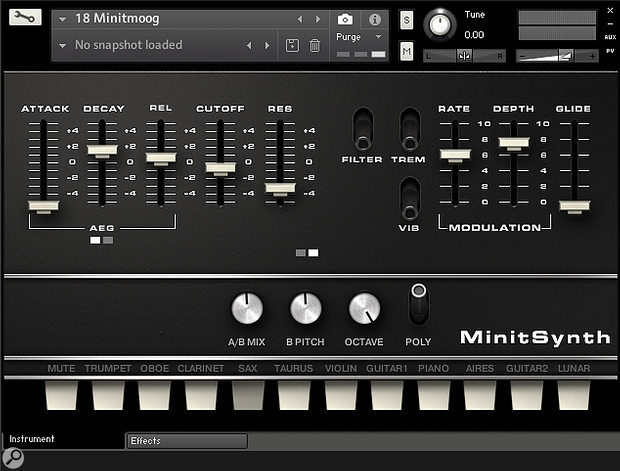 With its dual oscillators and four modes of pressure-sensitivity, the MinitSynth could be an interesting and expressive monosynth. The Attic 2 version is a strange hybrid of the original with some significant omissions and some useful extras. On the plus side, it provides independently programmable ADR contours for the filter and the amplifier, programmable cutoff frequency and resonance controls, and filter cutoff frequency modulation. It's also polyphonic if you want it to be, which is a huge bonus. On the minus side, it loses oscillator sync, and all of the touch-sensitivity has disappeared from the control panel. There's nothing one can do about the loss of sync but, if you're au fait with Kontakt's edit mode, you can recreate most of the original's pressure-sensitive capabilities by adding modulators and directing aftertouch to three of the four original destinations — oscillator pitch, filter cutoff frequency and filter modulation depth. The sound is much as you would expect — very different from the classic Moog sound, but quirky and sometimes very usable. 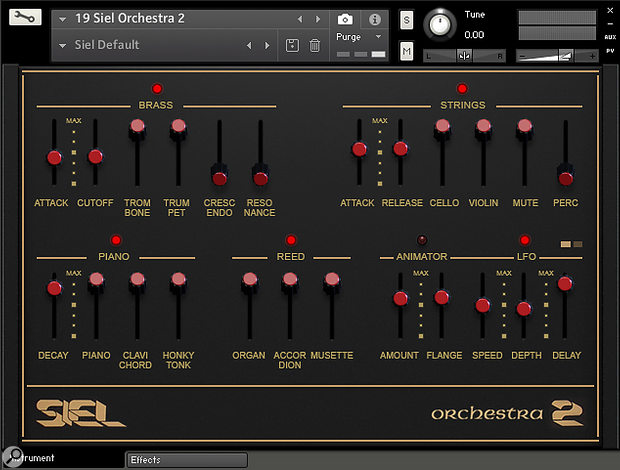 The Siel Orchestra 2 should have been a great little synth, but somehow it wasn't. Nonetheless, some pleasing sounds can be wrung out of it and so it is here. The Attic 2 emulation offers an almost identical set of controls, and the only change is the omission of the direct/EQ slider that allows you to balance the pre- and post-EQ contributions to the sound. Inevitably, since this is largely a preset instrument, the sounds recall the original very well so, if you like the string ensemble or sforzando brass sounds of the Siel, you'll like this too. You can even find uses for the piano and reed voices which, with suitable effects, can conjure a small but interesting range of sounds. Unfortunately (like the original) there's no mixer that would allow you to balance the contributions from the four sections. Since Soniccouture has enhanced many of the other instruments in Attic 2, I think that this was an opportunity missed.

There's nothing obscure about the last of the new instruments in the collection because it's sampled from one of the most important, most extensively used and widely emulated keyboards in synthesizer history, the Solina. The version here is a faithful rendering of the Mark III — ensemble on/off switch, stereo output, no LEDs — and retains the same six voices together with the separate level controls for the bass and polyphonic sections, plus crescendo and sustain faders. The result is simultaneously as limited and as useful as the original. However, selecting multiple voices simultaneously without the ensemble engaged generates a sound that choruses slightly. This is of course wrong; all of the voices on the Solina were generated by the same oscillators, so no such chorusing occurred. Also, beware playing above the range of the original instrument — the aliasing quickly becomes horrible! But you can safely ignore these niggles — after all, who plays a Solina without its ensemble or outside of its range? The instrument can sound great, and few will care that it's not quite a real Solina.

The Attic 2 offers a fascinating range of (primarily analogue) vintage instruments — the kind of thing that you might indeed uncover in dearly departed Great Uncle Albert's attic. In several cases Soniccouture have usefully extended the functionality of the emulations without diminishing the charm of the originals, and another bonus is that it's simple to automate them. Just Ctrl-click on a control, select Learn MIDI CC# Automation and then tweak the physical knob, slider or controller on your controller keyboard and the connection is made. What's more, unlike some soft instruments from elsewhere, you can assign a single MIDI CC to multiple parameters, which can be very useful. To be fair, a few samples need replacing or editing but, with the exception of a tiny handful in the ARP Omni 2, I was always able to sort things out within Kontakt itself. Ultimately, I think that there's a lot here that will be both fun and useful for aficionados of vintage keyboards and synth arcana. Since it's unlikely that you'll ever own all of these synths and the Attic 2 costs less than £10 per instrument, it has to be viewed as very good value, both musically and financially.

Sitting behind each instrument there's an extensive effects section that includes a chorus, a phaser, a delay unit with sync, and a reverb offering a huge selection of springs, plates, rooms, halls, cathedrals and special effects. There's also a filter section with HP and LP filters (the latter with resonance), a three-band equaliser, a saturation generator, a compressor, an amp/cab modelling section, a Leslie effect, and an overdrive. There's no signal path shown to illustrate the order of the effects but, if you're happy to dive into Kontakt, you can reorder and edit them. I found them invaluable in coaxing high-quality results from Attic 2 and the only glitch I encountered was that occasionally, when accessing the effects for the first time after loading an instrument, some were switched on when their LEDs were off, or vice versa. Switching them on or off always remedied the problem, so remember that this might be necessary or you could be confused by what you're seeing and what you're hearing.

If you're after digital versions of Minimoogs, Prophets and other mainstream synths, look elsewhere. But if a collection of more obscure instruments appeals, you should definitely try The Attic 2. It will provide interesting and useful sounds that might be hard to obtain by other means.