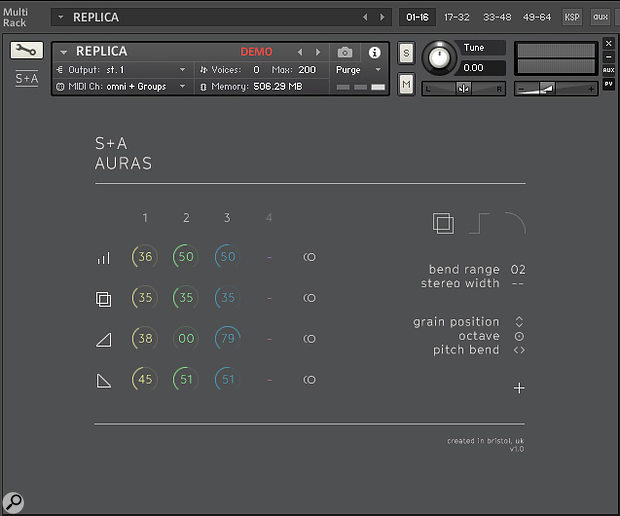 We explore some alien soundscapes, courtesy of Slate + Ash's Auras...

Auras, by Slate + Ash, is described as an MPE-capable sample library that "explores the realm of musical sounds that are formless or undefinable in nature". They would at least seem to be definable in NI's Kontakt sample player, and you'll need to source that for yourself — Auras comes as a set of Kontakt 'Multis' alongside 9GB of sample data. You'll also need the full version of Kontakt (5.6.5 or higher), the free Kontakt Player won't do.

From reading the overview on the Slate + Ash website, it's not actually that clear whether Auras is a sample library, an instrument, or a carefully curated set of interactive sound pieces. As far as I can tell, what you get for your money is a combination of all three: each of the 60 or so Kontakt multi-programs is a rich, multicoloured and highly dynamic sonic atmosphere. Many of the programs are notionally tuned, but there's often too much going on for you to have a chance of picking out a convincing root tone, so you may have to be content with swirling chordal structures, at which the Auras library excels.

When it comes to the editing interface for the programs, Slate + Ash have gone for simple, minimal macro-style controls for shaping the sounds. (For more detailed editing, the rest of Kontakt is available to you at the click of a button.) The main editing panel, described as a 'mixer', presents the layers of the current program (up to four), each arranged as a vertical colour-coded stack of four knobs (see screenshot above). Each layer has a control for volume, reverb level, attack time and release time, all indicated as percentages. A layer can be muted by clicking on the digit above its stack of controls, and there are switches for ganging each specific control across all the layers.

The top right of the editing interface is a set of on/off switches affecting the whole program: reverb, a compressor/limiter, and a low-pass filter. When the filter is enabled you choose a modulation source: slide, press, strike or mod wheel.

Terms like 'slide' and 'strike' will be familiar to anyone who uses ROLI's Seaboard or any other MPE-capable controller, and the Auras library has been designed with MPE in mind. The programs are polyphonic in their controller response, with many of them layering additional sounds on a note-by-note basis according to 'slide' (forwards-backwards movement on the keys). Polyphonic glide (pitch-bend) also works, and while my own glide technique is far from perfect, there's often so much pitch modulation going on already that a bit of fingered detuning just adds nicely to the richness.

If you aren't MPE-equipped, then the various gestures can be mapped to continuous controllers, and there's a MIDI Learn feature for assigning controller numbers. You'll obviously lose the polyphonic expression, but the sound palette is so rich that you're probably not going to be using lots of polyphony in the first place. High polyphony is also going eat into your CPU usage: on my 2014 MacBook Pro I was sometimes seeing a usage figure of 30 percent for a three-note chord, though many programs were lighter on their resource use. 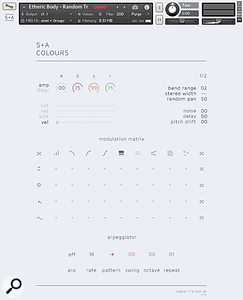 Mixing Colours: modulation and arpeggiation at the sample level.Continuing down the editing panel, there are global controls for pitch-bend range and stereo width, and then a small mapping panel for attaching MPE gestures to internal voice parameters (with non-MPE controller assignment as an option). The actual parameters vary from program to program: a granular sound might show 'grain position' where a more conventional drone might have a parameter called 'organ'. (One program has a parameter called 'screech'.) Since the programs aren't documented apart from a short descriptive sentence on screen, you'll have to use your ears to work out what the parameters actually do.

Armed with a pair of Seaboard Blocks, I worked through the programs to get a sense of the style and variety of sounds on offer. All are rich, organic, highly layered and mobile, usually with a taste of wavetable or granular synthesis somewhere in the mix. Some have rhythmic arpeggiated components, or simple step-sequenced patterns, but by and large the sounds are rhythmless, huge, distant and ominous. When it's possible to tell, some of the sounds are clearly synthesized, while others are sampled from what sounds like various orchestral bowing actions. (From the descriptive text, the cello seems to be seeing a lot of action.) Most programs are bathed in reverb, some with an obvious echo stage as well. (While the reverb can be turned off, echo cannot.) Overall I'd describe the sounds as deep, dynamic, colourful and spacious, while generally being tonally slightly ambiguous.

If I ever find myself scoring Netflix's next supernatural thriller, it'll be a perfect fit.

Alongside all the Auras programs comes a second set of around 100 programs called Colours. If Auras are the final instruments, Colours can be thought of as the tools to build them, each being a program built around a single sample (or multisample). Colours are categorised by sample type (synth, bowed, noise + texture and so on), and each program is presented in a standard, minimal control panel. There's an ADSR envelope for amplitude and one for filter, plus controls for filter cutoff and resonance, envelope amount and velocity sensitivity: not the most sophisticated synthesis architecture in the world, but adequate for the task of shaping the samples. A modulation matrix maps slide, pressure and a pair of LFOs onto volume, low- and high-pass filter, and amount of saturation, bit-crush, detune, reverb and delay. The filters and all the effects have dedicated control panels, though these are generally simple (sometimes only a single parameter knob). The modulation matrix can be randomised, and there's a simple dedicated latchable arpeggiator: arpeggiation and delays can be tempo-sync'ed.

Auras is a bit of a niche product, aimed at rich soundscaping, and the sounds tend to have a mind of their own when it comes to pitch (though not necessarily in a bad way). The instruments aren't categorised in a way that makes them easy to drop into a project, and their pitch ambiguity could make them tricky in a mix. On the other hand, they are richly textured and performative. Out of the box, Colours is a bit more of a mixed bag, with sounds that are less polished, but with more scope for customisation. While I don't see Auras appearing in a chart hit any time soon, if I ever find myself scoring Netflix's next supernatural thriller, it'll be a perfect fit.

Auras is a combination of sample library and instrument, supporting MPE and generating rich, evolving soundscapes. Colours is a set of building blocks with a modulation matrix for adding MPE expression to a library of base sounds.