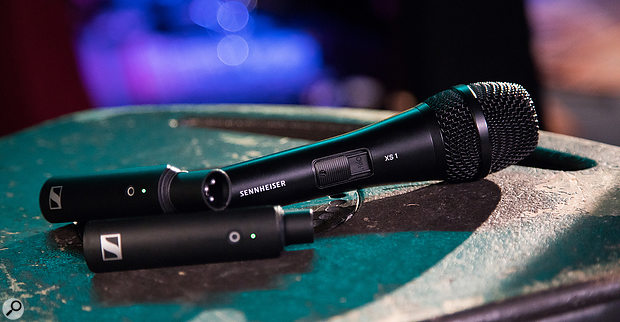 This wireless system combines supreme ease of use with the quality for which Sennheiser are known.

Sennheiser build some of the most sophisticated radio mic systems available, but their new XS range seems to have been designed for those users who want to forget about technology and just get on with making music. There are no antennae to set up, no channels to select, no gain controls, no arcane displays — it's almost as easy as turning on your TV. The system looks after channel allocation and interference management automatically.

The system under review is the XSW‑D Vocal Set, but other systems are available, including kits designed for instruments and headset or lavalier microphones, and also a set designed for use with video cameras.

All the XS systems work on the licence-free 2.4GHz (Wi‑Fi) band and incorporate Li-ion batteries that can be charged from any USB charging point to give around five hours of operation. The maximum working range is around 75 metres but this will be less where there are obstructions between the transmitter and receiver. It is also possible to switch between multiple transmitters linked to one receiver where the application demands. The transmitter and receiver components are only a little larger than a standard XLR connector, which makes the system very compact.

The XSW‑D Vocal Set comprises a Sennheiser XS-1 cardioid–pattern dynamic microphone, mic clip, a micro–USB cable for charging, a transmitter that plugs directly into the mic's XLR output, and a similarly shaped receiver that plugs directly into a mixer or stage box. A storage pouch would have been nice but none is included. No charger is provided either, but any USB power source will do the job. The XS-1 microphone may be Sennheiser's entry–level model but it sounds clean and has good resistance to popping and handling noise. Though the mic has a slide on/off switch, this can be locked in place to avoid inadvertent operation, and because the mic and transmitter are separate, the XS-1 can be used as a regular wired mic when necessary.

Pressing the buttons on the transmitter and receiver switches them on, and the LEDs flash green until the two devices make contact, after which they light solidly. The same LEDs monitor battery condition, changing to amber and then, when the charge falls below 5 percent, showing solid red, then flashing red just before shutting down. The power button on either unit can also be pressed to mute the audio, at which point the LED shows amber. Pressing and holding down the power switch on either the transmitter or receiver for over three seconds switches it off, extinguishing the LED. During operation, the LED turns red to indicate that you are about to move out of range. If the transmitter and receiver are not paired for any reason, another simple ritual involving long button presses puts things right. Charging is via the included USB cable, although only one is included, which seems a little tight given that you might want to charge both the transmitter and receiver at the same time.

The XS-1 mic sounds clean and articulate, and I couldn't hear any difference between wired and wireless operation.

I have no qualms about the technical or physical aspects of this kit, and although it costs a little more than many competing products, it's still sensibly priced given the professional level of performance. Some users are concerned about latency with digital systems, and while this is usually too small to be musically significant, it can be a concern when using in-ear monitoring. Here the latency is 4ms, which is typical for this type of system.

Despite its low cost if bought separately, the XS-1 mic sounds clean and articulate, and I couldn't hear any difference between wired and wireless operation. The good thing about having a kit with a plug-in transmitter is that you can also move it to a different mic if necessary — and you can plug in the mic using a cable if you forget to charge the wireless batteries. The signal-to-noise ratio is quoted as being better than 106dB, and was certainly never audible to me. The range also never proved to be a problem, and in most cases the receiver will be somewhere on stage, so venue size is unlikely to be a restriction. The price of this kit is also sensible given the quality on offer, so my only whinge is the lack of a storage pouch and the provision of only one rather than two USB cables for charging.

While not at the extreme budget end of the spectrum, this kit is appealingly priced, easy to use, and delivers the kind of performance we've come to expect from Sennheiser.