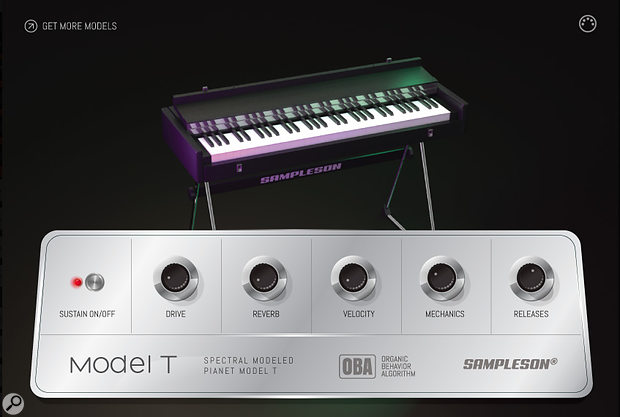 Is it a car? Nope, it's a vintage keyboard emulation, brought to you by the Sampleson company of Argentina. There's a refreshing lack of personal information on the company's website — when I enquired who they are, I received this reply: "Augusto Filocamo here. Dev and owner at Sampleson, 43 years old, two kids, a cat." Any cat owner is fine by me, so from that point I was able to proceed with confidence.

The Pianet Model T is a lesser-known descendant of the Hohner Pianet N, famously heard on the Beatles' 'I Am the Walrus' and the Zombies' 'She's Not There'. Introduced in 1977, the Pianet T sounds somewhat darker, with a tone some describe as a cross between Rhodes and Wurlitzer electric pianos.

In these days of complex, feature-heavy interfaces, Model T's GUI is almost shockingly simple: a panel housing a switch and five rotary controls, superimposed on a background image of the old instrument. That's it — no sub-menus, no alternative screens, no text to wade through. Click on the picture's keyboard and — hey presto! — nothing happens. Once you get over the surprise, it's quite a relief.

While you wouldn't buy this instrument to boast about its facilities, you might be tempted by its unique and rather charming sound: it has a distinct, idiosyncratic, mellow and plummy attack strong enough to hold its own against a rhythm section, and a dusty, dreamy, warm sustain unlike that of any other electro-mechanical keyboard. I found once I'd been playing it for a while, I didn't want to stop — download the free demo, and you might feel the same way.

Returning to the controls, the on/off switch activates sustain pedal (not available on the original instrument), while the rotary dials control drive, reverb, velocity response (another modern innovation), key-off mechanical noise and release volume. The drive effect is too polite for my taste and its overall volume diminishes when you layer notes (the opposite of what you want distortion to do). I'd like to have seen tremolo and simple tone controls included, and I missed having a fine-tune setting, which would enable the creation of layered detuning effects using two instances.

Model T Pianet works as a plug-in and stand-alone instrument on Windows and Mac with no extra software required. Unfortunately the review copy's stand-alone version exhibited insistent crackling, apparently caused on some Windows systems by a buffer issue. The maker says this will be fixed in a September 2019 update.

One further surprise is that, despite its inclusion here, this instrument uses no samples: it's created by spectral modelling, which accounts for its pristine tone, perfect tuning and overall playability. Consequently, the download is only 30MB. Because of that and the musician-friendly price, I'm giving it four stars.