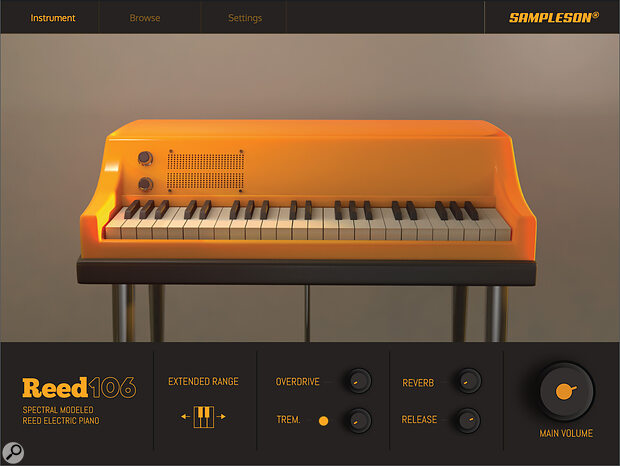 This affordable electric piano from Sampleson is based on a rare student model Wurlitzer, the 106P, notable for its retro 1970s orange plastic case, cute 44‑note keyboard, and lack of sustain pedal. The sound engine uses spectral modelling, making for a tiny installation size of about 45MB in any of its forms (32‑/64‑bit VSTs in Windows, a VST or Audio Unit in Mac OS, or standalone app). It also means there’s no nasty lurches in sound across the velocity and pitch ranges. Intriguingly, Reed 106 is said to be ‘ever‑changing’, with continual small variations in sound quality mimicking the effect that temperature, humidity and power‑supply fluctuations might have on a real Wurli.

In use, Reed106 is a self‑effacing presence on your computer. The scalable high‑DPI interface offers only a handful of parameters, and consequently the preset management system might not see much use. The appearance of the on‑screen Wurli does change throughout the day though, with different lighting and shadows: a bit of completely pointless but fun programming.

The sound is different from the more commonly encountered Wurlitzer 200A. There’s a similar rubbery attack, but a mechanical knock too, and the decay quickly dampens to something somewhat harp‑like and pleasantly naïve. The basic output is mono, as is the onboard fixed‑depth/variable‑rate tremolo, and only the built‑in reverb (a medium room, pretty good) adds any stereo width. The overdrive is fuzzy, and doesn’t add much warmth or weight.

The pitch compass, by the way, is permanently extended out to a normal Wurlitzer 64‑note range, A1 to C6, with pronounced differences in behaviour and character across its width. The top four notes are undamped. Below this, the behaviour of the adjustable key‑release sound varies considerably: in the upper reaches it’s a pronounced, discrete ‘clonk’. For any notes that have completely died away, though, it reduces to a whisper, so it’s all nicely nuanced and sophisticated. Sustain pedal response is quirky: releases of pedal‑held notes go to silence brutally, and there’s some weirdness with continuous‑type controllers. For most types of playing though it won’t be an issue.

Analogue‑style inconsistency seems to go with the spectral modelling territory.

The never‑the‑same‑twice aspect is interesting. I have to confess I never noticed any changes aurally whilst playing, but multiple DAW bounces of the same MIDI phrase show clear differences in the waveform, even if made just seconds apart. And no pair of them remotely nulled when played back together with one’s polarity flipped. Running the same test on two other modelled Wurlitzers I had to hand revealed that those don’t null either. Sample‑based alternatives did, completely. So Sampleson’s claim to be unique in this regard may not be quite accurate — analogue‑style inconsistency seems to go with the spectral modelling territory.

On a musical level, Reed 106 is vibey in an unpretentious way, and can go quite grungy. It has a character all its own: a bit weird, definitely different, and all the more charming for it.

A charming recreation of a lesser‑known Wurlitzer at a knockdown price.