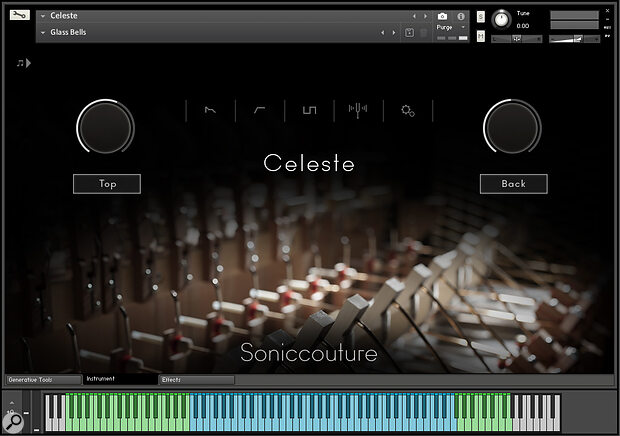 Though the celeste (aka celesta) is a keyboard instrument, it’s often considered part of the percussion family by virtue of the bell‑like chime of its struck steel plates. As such, it slots neatly into Soniccouture’s illustrious tuned percussion range, taking its place alongside the excellent Grand Marimba, Vibraphone, Morpheus and Balinese Gamelan Kontakt libraries.

Having long been a fan of the instrument, I’ve occasionally been disappointed to find clunky or dead notes in some sampled versions. That’s not the case here: putting their money where their mouth is, Soniccouture collaborated with German manufacturers Schiedmayer Celesta to procure a new top‑of‑the‑range, five‑and‑a‑half‑octave ‘Studio’ model which was perfectly tuned and serviced before shipping to the UK. The result: an utterly pristine set of 6352 samples recorded from two microphone positions, occupying 6GB of disk space once installed.

Soniccouture have given this musical treasure the five‑star treatment it deserves. The celeste’s sparkling tone is beautifully captured by a set of four top mics, while the slightly brighter‑sounding rear array sounds wonderfully close‑up and intimate on headphones. When combined, the two mikings perfectly recreate every detail of Schiedmayer’s superior instrument. An exhaustive sampling job comprising 32 velocity levels, key‑off samples and multiple round robins completes the picture: this deep‑sampled, supremely playable celeste is perfect in every detail, and its dynamic response is outstanding.

As well as being a source of delicate orchestral magic, this gem of an instrument is a blessing for keyboard players...

I found the close‑miked default patch ideal for my purposes, but if you want to hear the celeste in a concert hall setting, there’s a selection of great convolution reverb presets which include IRs taken from All Saints Church, London (recording site of Soniccouture’s popular choir library) and a vintage AMS RMX16 hardware unit. You can also love up the sound with internal effects such as delay, a lush chorus, LFO‑driven tremolo, vibrato and Rhodes‑like auto‑pan, or mess it up with lo‑fi and distortion treatments which include a fabulous ring modulator.

Celeste works with the full version of Kontakt 6 and the free Kontakt 6 Player, version 6.2 or later. As well as being a source of delicate orchestral magic, this gem of an instrument is a blessing for keyboard players, particularly those who enjoy working with arpeggiators and step sequencers. Another winner from Soniccouture.