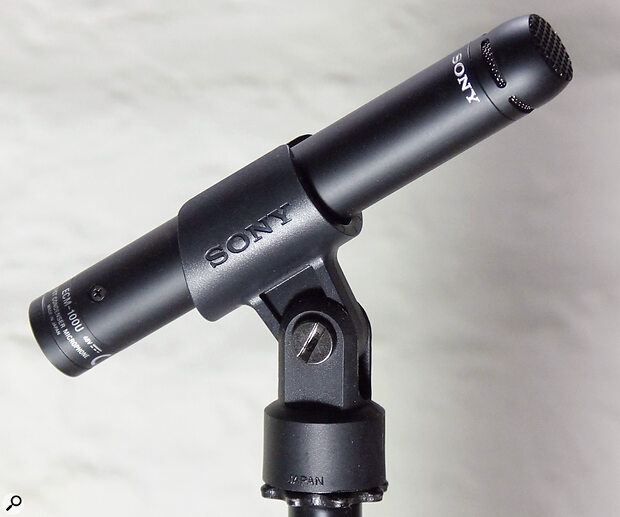 We put Sony’s classy ‘hi‑res’ instrument mics to the test.

Sony have an enviable reputation for producing high‑end microphones, and their range has recently been augmented by two ‘pencil mic’ models: the ECM‑100U unidirectional microphone (pictured, above) and its ECM‑100N omnidirectional counterpart. Both use electret capacitor capsules, which puts them alongside the likes of DPA and Earthworks. Both models are designed with a view to instrument recording in the studio, as well as having a frequency response intended to make the most of high‑sample‑rate recording. The ECM‑100 microphone capsule is designed with a flat response and covers frequencies from 20Hz up to an astonishing 50kHz. This isn’t the first Sony mic to reach such highs — their previous C100, reviewed in February 2018 (see https://sosm.ag/sony-c100), had a similarly extended frequency response, but was even more unusual in that it took a dual‑capsule approach to do so. The capsule used in these ECM‑100 mics is in fact the same as that used to capture the ultrasonics in the C100, but is implemented here as a full‑range capsule. This is rather smaller than that of many other ‘stick’ mics, which probably accounts for both its extended frequency response and its noise performance, which I’ll comment on shortly.

There’s more engineering here than just the capsule design though, as the microphone bodies utilise what Sony describe as a “two‑part metallic structure”, originally employed in their seriously esoteric C800G microphone, to avoid acoustic vibration. This body houses the transformerless electronics and is fitted with the familiar balanced XLR connector. Both mics feature a low‑cut filter switch and a ‑10dB pad switch to provide additional headroom when working with very loud sound sources. Overall mic dimensions are 19 x 130 mm, with a weight of 130g. The standard of construction is all that we’d expect from Sony, with the entire mic being finished in black, which helps the mic ‘disappear’ when used as part of a video broadcast performance. Each is supplied in a case with a mic holder, windscreen and a stand screw adaptor (W3/8 to NS5/8).

Looking at the specs for the ECM‑100U, only the inherent noise figure of 21dB (0dB SPL = 20μPa) causes a raised eyebrow. While not excessively high by any means, one might have expected a microphone that reaches such technical heights in other areas to have been a little quieter. It is of course normal that smaller‑diaphragm microphones have a higher noise floor than large‑diaphragm models (it’s all tied to the physics), but there are quieter competitors including some of the Earthworks models. The maximum SPL handling is 142dB, which yields a dynamic range of around 121dB and a signal‑to‑noise ratio of better than 73dB A‑weighted (1kHz 1Pa). Sensitivity is specified as ‑41dB, where 0dB = 1V/Pa at 1kHz. While many electret microphones run happily at a reduced phantom power voltage, these mics require standard phantom power in the 44 to 52 V range. The ECM‑100N omnidirectional model boasts similar specifications and external styling, other than of course the polar pattern, and the lack of side vents around the capsule that give the ECM‑100U its directivity.

I tried both mics on a range of instruments... In all cases I got back an extremely faithful rendition of the sound source with very natural, unhyped‑sounding highs.

Both mics feature pad and filter switches; the cardioid ECM‑100U is visually identifiable by the slotted ports underneath the capsule.

While you’d need to be running at a high sample rate to take full advantage of the extended frequency response of these microphones, their overall quality is still very apparent at 44.1 or 48 kHz. At higher sample rates a spectrum analyser shows that frequencies an octave or more beyond the human hearing range are still being picked up, and while there are arguments as to whether this high‑frequency content really makes a practical difference or not, there are other benefits in extending the audio range. While most capacitor microphones run into resonances at the very top of their frequency range, the extended responses of these two microphones would suggest that any untoward resonances have also been pushed way beyond the audio range, which perhaps accounts for the natural, focussed sound of these microphones and may be more relevant than their ability to pick up frequencies that only your pet bat might appreciate.

I tried both mics on a range of instruments including acoustic guitar, tin whistle and a tongue drum, the latter to check out their credentials on harmonically complex, percussive sounds. In all cases I got back an extremely faithful rendition of the sound source with very natural, unhyped‑sounding highs. This aspect of their performance could prove a real benefit when recording violins and other bowed instruments, which produce a lot of high‑frequency information. Sonically, the two models correlate very well, though differences are to be expected based on the recording environment as the omni model naturally picks up more room ambience. Used in stereo configurations, the mics deliver very predictable results, and their specifications are tight enough that you don’t need to seek out matched pairs.

Going back to that noise figure, at no point during my testing did microphone noise become an issue, and I’m sure this would be the case for any number of studio recording situations using familiar instruments. I’m a great believer in assessing what a product is good for rather than picking away at shortcomings that have little or no impact in normal use, and I have to say that these two microphones produce natural‑sounding results pretty much regardless of what you point them at. It may be that their strengths would be best appreciated by those recording classical instruments, but they also deliver reliable and musically satisfying results on instruments more commonly found in pop music productions. Given that the street price often offers a significant saving on the RRP, they’re also very sensibly priced for microphones that set such a high bar.

These are excellent all‑round instrument mics that you can rely on to deliver first‑class results in the majority of studio applications.