If you’re looking for a compact, scalable system for outdoor events, this affordable rig may be just the ticket.

Most of us are lamenting the scarcity of gigs at the moment, but the prospect of some smaller‑scale outdoor events in pub gardens and the like is inching closer, and that’s a scenario for which the Powerwerks PW3X6BT is well suited. It can be used on its own for a solo performer/duo working with backing tracks; it can be used in pairs for stereo operation; or, where more low end is needed, it can be teamed up with one or two of Powerwerks’ matching 10‑inch or 12‑inch subwoofers. 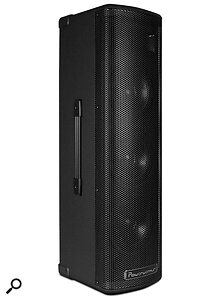 Powerwerks PW3X6BT.One interesting thing about the PW3X6BT is its column format, which falls somewhere between a conventional box and a line array. Its cabinet appears to be made of 18mm wood‑composite material and is covered in textured vinyl, with a perforated metal grill protecting the entire front. A side strap handle is fitted for carrying and the overall build feels solid and reassuring.

Its three six‑inch drivers sit below a one‑inch neodymium compression driver feeding into a flared horn, a combination which allows the system to cover 65Hz to 20kHz in a fairly compact (240 x 205 x 730 mm) and portable (13.15kg) format. Standard pole mounts are fitted to the cabinet bases.

As with many modern PA speakers aimed at gigging musicians, this one is active and includes a digital mixer with reverb, plus the ability to stream music via Bluetooth (Bluetooth 3 compliant), the latter feature being handy for playing back interlude music or backing tracks. There’s even a pair of USB power outputs for charging your phones or powering your tablet. 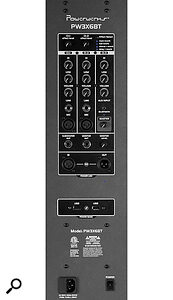 The PW3X6BT has an integrated mixer section, which can accommodate two mic/line sources plus a stereo backing‑track feed, via either Bluetooth or mini‑jack.All the mixer controls are on the rear panel, where you’ll find two mic/line channels and one aux channel that can be fed either from a stereo mini‑jack or via Bluetooth. All three channels have Hi, Low and Volume controls, and there’s a choice of four onboard effects that can be added to channels one and two via rotary effects sends. The effects options are Room Reverb, Hall Reverb, Chorus+Reverb and Delay+Reverb.

Channels 1 and 2 can be fed from either XLRs (mic) or quarter‑inch jacks (line). There is a phantom power option for the mic inputs, though this only provides 15V, so you may find that only back‑electret‑type capacitor mics work correctly as many conventional capacitor mics require the full 48V to operate. There’s a master volume control, a high‑pass‑filtered output to feed a sub, a TRS balanced monitor output and a pair of in and out Link XLRs, which create a bus between two columns so that both mixers feed both speakers.

When a jack is inserted into the sub output, a high‑pass filter (variable between 20 and 150 Hz) is activated to reduce the amount of low‑frequency energy reaching the speakers in the column, which helps it achieve maximum clean SPL.

The Class‑D amplifier delivers 300W (peak) and the maximum SPL is specified at 125dB. The documentation tells us that the system equalisation is “inspired by the natural response of studio monitors”, and tailored to be pleasing to the ears over hours of listening. Certainly the tonal quality sounds more hi‑fi than most typical ‘one‑driver‑plus‑tweeter’ PA boxes, especially in the critical midrange.

Finished in the same tidy vinyl as the column and sporting a similar metal grille to the PW3X6BT, the PW110 subwoofer features a pole‑mount socket on its top and a side‑mounted strap handle. It is a low, squat affair measuring 453 x 332 x 567 mm, and it weighs a manageable 22.5kg. Looking through the grille, the front‑facing woofer and two ports are visible. 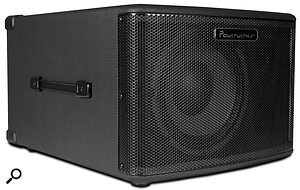 The matching PW110 sub is based around a 10‑inch bass driver, and can handle crossover duties when paired with a PW3X6BT top.The sub includes the necessary low‑pass filtering to cross over correctly with the tops. Power comes from a 200W Class‑D amplifier, and the response (after the internal filtering) is 35 to 150 Hz. There are no controls other than a level control and a power switch. Power comes in via an IEC connector and audio via a quarter‑inch jack, which is wired in parallel with a link jack for feeding the signal to further subs.

There is a larger PW112 sub available, which comes equipped with a 12‑inch driver, but according to the spec sheet, that covers the same frequency range and has the same amplifier power.

My first test was to use a single PW3X6BT without the sub, for a Halloween event under a canvas shelter outside a local pub, using the system for backing tracks plus a Line 6 HX Stomp guitar pedal. A couple of my musician friends attended and commented that the sound quality was impressively clear and also adequately loud. Certainly I was impressed by the general clarity and musicality of these speakers, especially given their extremely modest cost. The claim that they sound more like studio monitors than typical PA speakers is not unjustified, though to my ears they have a bit more presence at the high end. This actually helps the sound remain clear at a distance, at the expense of perhaps just a little harshness when heard close up.

These tests were done with the EQ set flat using commercial backing tracks, so there’s always the option to tweak the EQ to suit specific situations. I did find that one of my iOS devices, when connected to one of the USB charging sockets, produced a noticeable level of background noise, so I switched to battery power for the actual performance.

I was impressed by the general clarity and musicality of these speakers, especially given their extremely modest cost.

Adding the sub filled out the low end in a pleasing way, providing around one more octave of bass without sounding overbearing, while at the same time lightening the load on the columns. I found that I needed the volume control on the sub to be around three quarters of the way up to give the most natural sound. Use both columns and you have a neat and affordable PA system well‑suited to applications where a healthy sound level is needed.

Note however that, unlike most systems where the sub takes a stereo feed and then handles crossover duties, including feeding a suitably filtered signal to the tops, these subs work from a single input, so if you want to work in stereo you either need two subs or accept that the bass contribution will only come from one side of the stereo mix. This won’t be a big problem with most material as bass and drum sounds tend to be panned to the centre, but if using it as a DJ system, you might come across some material that was mixed oddly, with the result that the bass balance might be a bit off for some tracks.

To sum up, the portability, clarity and pricing of these components make it possible to configure a system to suit your needs for relatively little outlay. The build quality is also impressive for the price, so my only reservation is the 15V phantom power.

A practical and affordable range of components that can be configured for solo acts, duos, DJs or bands.