Conceived as an affordable alternative to the Ondes Martenot, the Ondioline (aka Jenny Ondioline) was invented by Frenchman Georges Jenny in 1940. It is a monophonic, valve–powered synth with a small–scale, three–octave keyboard, incorporating its own amplifier and speakers. Similar instruments of this type include the Jennings Univox, Hammond Solovox and Clavioline, the last of which famously featured on classics such as the Tornados’ ‘Telstar’ and Del Shannon’s ‘Runaway’. The Ondioline is the more complex of these instruments, having a laterally sprung keyboard enabling the player to perform manual vibrato by wobbling the keys from side to side, similar to the Ondes Martenot. Unlike the Ondes, it has no pitch ribbon, so portamento effects are not possible; but the Ondioline’s keyboard is pressure–to–volume sensitive. One feature common to the Ondioline and its close cousins is a knee lever for controlling volume, bringing additional hands–free expression to performances. There are no VCAs, VCFs or envelope shapers: note shaping is entirely in the hands (and knees) of the performer. 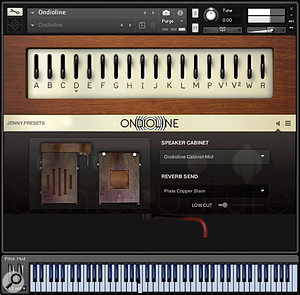 Soniccouture’s Kontakt recreation stays true to the simplicity of the original, modelling its features and behaviour as closely as possible, with a laudable minimum of extra bells and whistles. The controls are basic, if enigmatic: it has 18 selector switches, the first 13 simply labelled A to M, the remaining five labelled P, V1, V2, W and R. As there’s no labelling to indicate what the switches do, creating tones can be a rather trial–and–error affair. However, hovering the mouse over any control displays its function in Kontakt’s Info strip. Full descriptions are also given in the PDF manual.

Waveforms are selected using switches A, B and C — the various combinations of their up and down positions provide a total of eight waveforms ranging from muted, flutey tones to harsh and nasal. Switch D engages a tempo–synced auto–repeat function, a drop–down menu providing a selection of note values. Switches E to K are the tone controls: a collection of fixed-frequency low–, band– and high–pass filters modelled after the originals using convolution; their effect is accumulative if more than one is selected. Switch M engages the divider (think sub–oscillators), adding one and two octaves below the main tone; the volume of each sub–octave is adjusted by the two large cream–coloured knobs. Switch L cancels the main tone leaving only the sub–octaves. Switch P engages a short piano–like envelope, V1 to W control vibrato depth and speed, and bonus fader R controls the reverb amount, for which 32 convolution impulses are provided.

Much of the real Ondioline’s tonal character is due to its speaker, modelled here with convolution impulses of close, mid and far mic positions, as well as line out, plus five additional impulses borrowed from Soniccouture’s Ondes instrument. Performance options include aftertouch to volume amount, approximating the original instrument’s pressure sensitive keyboard, whilst the Ondioline’s manual vibrato can be simulated using the pitch wheel. So there we have it: simple, quirky, fun, authentic — and a fascinating tribute to one of the earliest synthesizers.