Indelibly associated with magic, sugar plum fairies and, inevitably, Harry Potter, the celesta (or celeste) is a keyboard-operated idiophone resembling a small upright piano. Sound is produced by chime bars struck by hammers — essentially a huge glockenspiel on steroids, played via a regular piano–style keyboard. Sonokinetic’s virtual Celesta runs in Kontakt 4.2.4 and above; however, unlike their ‘premium’ libraries (Minimal, Tutti, Grosso), it is not licensed through Native Instruments, so does not require authorising after purchase. For that reason, it does require the full version of Kontakt, and is not compatible with the free Kontakt Player. 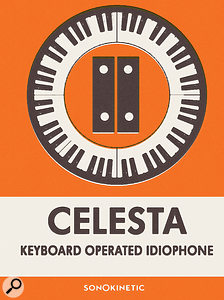 Sonokinetic have sampled this celesta in fine detail; 4000–plus samples make up a 3.1GB sample pool, covering every note of a five and a half octave range. This includes three velocity layers, separate samples for pedal up/pedal down, release samples, up to 15 round robins and a specially prepared convolution reverb. The celesta was recorded in a medium-sized, high-ceilinged studio from three microphone perspectives: close mono (Neumann, unspecified model), overhead stereo (Violet Audio Flamingo), and balcony stereo (Schoeps Colette).

The GUI is a simple but attractive one–page affair, offering just six controls: reverb on/off, amount and size on the left, and volume controls for each microphone perspective on the right. Sonokinetic also point out that you can swap their Reverb convolution impulse for any of your own.

The overall tonality of Sonokinetic’s Celesta is warm and sweet, with less hammer impact noise than I’d have expected from the close mic; interestingly, it’s more apparent on the balcony mic, despite being furthest away. The close and overhead mics have a slightly soft, distant quality that should sit well within an orchestral context, but sometimes you might want a bit more ‘clatter and thump’ if the celeste is to be featured more up–front. I managed to achieve this with a little patient editing, by identifying and selecting only the close-mic groups, routing them to their own instrument bus within Kontakt, and applying a two–band EQ to that bus, boosting at 130Hz and 1.5kHz. That brought out much more of the hammer noise, as well as giving the low end a bit of a lift.

The round robins ensure that the tonal variations of each hammer strike occur with sufficient randomness, which adds greatly to the sense of realism. I found the release samples hard to detect, being masked by the longish (default) release time of the main samples. However, even when the main groups’ release times were shortened it was still difficult to hear the ‘natural’ releases. Nevertheless, this subtlety of detail goes largely unnoticed, and doesn’t detract from the overall effectiveness of the instrument.

All in all, Celesta is a considerable cut above the standard workstation offerings; the three mixable mic perspectives allow you to place it where you want on the sound stage, whilst the round robins provide a subtle unpredictability and animation that lend it that vital touch of realism. Nick Magnus