There are relatively few sample collections released these days that focus specifically on vocals, and even fewer that deal with Middle Eastern vocals in the same depth as this library from Sonokinetic. Indeed, with a size of over 3GB there is plenty to play with... so play with it I did! 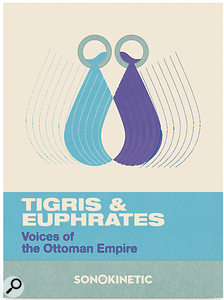 The samples themselves are grouped into folders of Male, Female and 'Specials', and there are also Kontakt 4 presets and multis. For both sets of samples, there are further groups of Chants, Makam and SFX, with both the Chants and Makam groups being further subdivided by musical key. Within the Kontakt patches are key‑switches that quickly allow you to choose different root notes, and which will alter the samples played accordingly. There's also a handful of patches with various background noises and sound effects, for added atmosphere. First impressions were that they definitely invoked images of sand dunes and noisy bazaars. Good so far!

Some of the patches have time-stretching mapped to the pitch‑bend wheel and can stretch 40 percent up or down. The quality of this stretching is acceptable for most uses, but for serious production I'd rather use one of my preferred tools to stretch the samples myself.

In addition to the samples themselves, there is a built‑in convolution reverb which, again, is a welcome addition, and is useful in that the impulse responses included seem to be sampled from locations in which you would be most likely to hear vocals of this kind: a mosque, for example. This is a nice touch but, once again, while using the samples I often found myself turning off the included reverb and instead applying a touch of reverb from one of my 'old faithful' plug‑ins.

This is actually quite a hard collection to review, because there isn't a huge variety of samples to work with. Yes, technically there are over 2750, but when you take into account the 12 different keys that they are presented in, the number of separate vocal phrases is reduced accordingly. Sonically, everything is excellent, and the price is pretty reasonable too. But I do have my reservations, the biggest one being that I feel many of the samples are very recognisable and will undoubtedly be showing up on film scores very soon. As such, the uniqueness of the collection, while being a selling point, can also be an obstacle. But I do honestly believe that, in the right hands — those of somebody who is prepared to experiment a little with the source samples — this is a valuable addition to the sound library of anybody working in film, TV or games, and even those working with more esoteric music.