Is there a place for small analogue mixers in the project studio these days? Actually, we think there is... 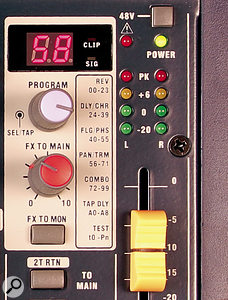 The effects section, adjacent to the master fader, has a generous array of presets, and the 'Program' knob usefully doubles up as a tap‑tempo button.

While it's perfectly possible to run a studio without any sort of mixing desk these days, and to rely largely on an audio interface with built-in preamps and monitoring facilities, a small mixer can still represent very good value for money — particularly by the time you've taken account of the preamps, EQ, patching and monitor‑control facilities. Those with built‑in effects also make it easy to provide simple artist cue mixes with reverb, delays or other effects, without having to deal with the prospect of latency that plagues so many audio interfaces.

Alongside the likes of Mackie and Allen & Heath, Soundcraft have long been one of the leading manufacturers of small‑format mixers that are suitable for use on stage and in the home studio. Their Notepad 124FX is one of their latest, and more compact, designs, so we thought we should see what place it might have in a home studio setup.

As the name implies, the Notepad 124FX is a 12-input, four-bus (ie.dual stereo) mixer, and includes on‑board digital effects. The first four channels offer mic and line inputs on separate connectors (XLR for the mics, TRS jack for the lines) and a gain-control pot, with which you can boost the incoming signal by between five and 60dB. You also get a three‑band EQ (four‑band if you include the switchable 100Hz high‑pass filter), with high (10kHz) and low shelf (80Hz) filters and a 1Hz, fixed‑Q, swept mid‑band in between. Each band offers up to 15dB of gain or attenuation. The remaining three controls, all rotary pots, on each of these four channels govern the effects send level, the L‑R pan position, and the channel output level. The other eight input channels are presented as stereo pairs, with the physical inputs coming in the form of dual TRS jacks on each of the four channels (labelled 5‑6, 7‑8, 9‑10, and 11‑12). These differ from the first four channels in that they offer no EQ, only effects send level, pan position and output level controls, though you do also get the option of switching between 'professional' +4dBU and 'consumer' ‑10dBv input levels.

Completing the tour of I/O, this mixer also offers a dedicated effects-send output on a TRS jack, a headphones output (again, on a quarter‑inch TRS jack), the main mix output via two balanced jacks, a dedicated TRS jack stereo monitor output, and two pairs of unbalanced phonos for the stereo record output and two‑track return. The latter can be used to connect the mixer to a tape machine or stand-alone digital recorder.

As mentioned earlier, there are two 'buses': the first is the main stereo bus, whose output level is governed by a long‑throw fader. Above the fader is a stereo LED meter, comprising eight LEDs (four for each channel). The top, red LED indicates that the signal level is high, though how high is not detailed in the otherwise comprehensive manual. Another two LEDs indicate the presence of mains and 48V phantom power, which is switchable globally for the four mic inputs using the push switch above the LEDs.

Adjacent to the LEDs is the on‑board digital effects section, which comprises a small screen with two rotary pots and one button. The first pot is used to select the effect, and doubles up as a tap-tempo switch, which is useful. (I'd have found it still more useful if there had also been a dedicated footswitch input for this function, but that would probably have added to the cost.) The second pot governs the level of the effects sent to the main mix, and below this is a button that's used to route the effects to the 'Mon' channel, of which more later.

The effects are the usual fare: a series of basic reverb and delay patches complemented by the odd modulation effect. I've still failed to find anyone who makes use of such modulation send effects, though the reverbs and delays are useful enough if you want to create a zero‑latency monitor mix when recording (for example) a singer. There's an impressive number of presets available, though — many more than you'd find on, say, a comparable Allen & Heath ZED-series desk — and this is useful when it comes to selecting the right reverb or delay for a given track. If you don't need any of this, there is a cheaper version of the mixer without the effects, known simply as the Notepad 124.

The 'Mon' (which of course means 'monitor') channel appears immediately below the effects section. Above its rotary level control are two buttons that can be used to route the two‑track return to the monitor mix and/or to the main mix. The monitor channel itself goes to both the headphones output and the pair of TRS jacks that make up the dedicated 'Mon' output.

In all, then, the functionality on offer is pretty standard for a mixer of this type — so the important thing is what it's like to use in practice. Plugging in and powering up is simple: this being a stand-alone analogue mixer, there's no software driver or USB connection to complicate matters.

I tested the preamps by recording vocals, an acoustic guitar and a basic drum‑kit part. The preamps are, as Soundcraft claim, reasonably transparent and neutral in character — which is, of course, what you'd want from a general-purpose mixer like this. Noise didn't seem to be a problem, and I found the the 60dB of gain was plenty in practice. Someone using an older passive ribbon mic might struggle here, but if you have the money to spend on those mics, I'm guessing you could also budget for a suitable preamp. I deliberately overloaded both the preamps and the master bus, and the distortion characteristics seem quite smooth to my ears. Obviously, it's possible to drive the preamps hard enough to make things sound nasty — but everything seemed to cope alright when overdriven. In short, the odd loud transient here and there won't trash your sound completely.

The 'British' EQs, as the Soundcraft marketeers describe them, are perfectly adequate for basic tonal shaping, and the turnover frequencies for the two shelves and the Q for the swept mid-band seem to have been sensibly chosen. The swept mid-band is obviously a restriction, but is understandable on a desk at this price. Importantly, it does seem to be musically sympathetic, with none of the harshness you'd get from some of the designs of cheaper competitors.

I found the +4/‑10 switch useful on the stereo line channels, as it enabled me to plug in various bits of professional and consumer outboard without the worry of level mismatches.

Finally, I tried using this mixer in the role of monitor controller. Given that there are plenty of dedicated monitor controllers that cost more than this desk, it puts in a capable performance in that role, making it easy to switch between different sources and different speakers plugged into the mix, monitor and/or record outputs. It won't win awards in this role, and I wouldn't expect it to — but it would nonetheless be a useful 'hub' in a basic home studio setup.

You're only ever going to get so much out of a mixer at this price, but Soundcraft don't seem to have cut the more obvious corners: I didn't detect a huge amount of crosstalk between channels, which is something that used to curse many earlier small‑format designs that I've used; and I didn't find any problems with audible noise when using the pots and switches.

The two things that you might miss are direct outputs and a built‑in audio interface or digital outputs. So many small, budget consoles come with a USB interface as standard now that it's almost hard to think of them as an extra. Direct outputs are perhaps less common in small-footprint designs, though very useful, enabling you to route the preamps directly to an audio interface. Of course, the addition of either facility would drive the cost up, and they won't be needed by everyone, so their omission is understandable.

The Notepad 124FX is a good, versatile little mixer that's also capable of serving as a basic monitor controller. It does lack some of the features of slightly pricier competition, such as the Allen & Heath ZED range, all of which have a USB audio interface built in, or the Mackie VLZ3 series, whose preamps are rather nicer, but which doesn't offer the effects — but it can hold its head up in that company without shame. If elegant, affordable simplicity on a budget is what you're after in a DAW front-end or a small on-stage setup, you could do much worse than acquire one of these little mixers.

There are now too many small analogue consoles to count, but the best competition comes from the likes of Mackie, Allen & Heath and Yamaha. Cheaper still are units from Peavey, Edirol and Behringer, but those I've heard aren't quite in the same class.

At this price, it's hard to find fault with this neat little desk, which should win fans on stage and in the home studio.