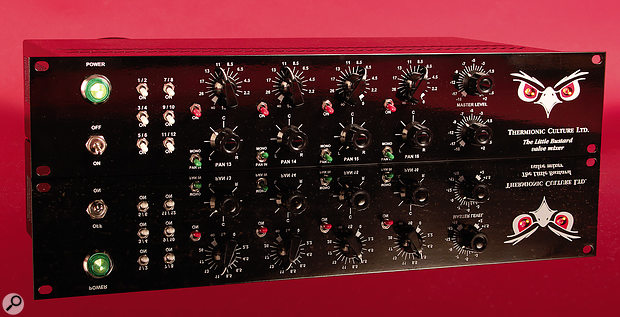 Join us, as we take Thermionic's new bird for a test flight...

The majority of 'boutique' manufacturers of high-quality valve audio equipment seem to be American, but the British manufacturers Thermionic Culture redress the balance very well with all manner of valve compressors, mic preamps, distortion units, equalisers and summing mixers — many having been reviewed in SOS over the years. Designer Vic Keary has been building valve audio gear since the 1950s and is a well-established master of the genre. You can read about his fascinating life in SOS June 2004.

The Little Bustard, launched last year, is the newest addition to the Thermionic family. This 16-channel valve mixer can be used in one of two ways: either to extend the input facilities of the Fat Bustard (reviewed in SOS January 2010), or as a simple stand-alone summing mixer in its own right. When used to feed the auxiliary inputs of the 12‑channel Fat Bustard, the Little Bustard extends the system to become a 28-channel valve mixer.

The Little Bustard is a 2U, rackmounting, valve summing mixer, and extends around 225mm behind the rack ears. The rear panel carries a fused IEC mains inlet socket, a 230/115V input-voltage selector, and a plethora of XLR sockets — 16 females for the inputs, and two males for the outputs. However, despite appearances, all of the inputs and outputs are unbalanced, with pin three of every XLR being tied directly to chassis earth (along with pin one).

It's worth bearing in mind that not all active balanced output devices appreciate having one side tied directly to ground. Transformer output devices will be fine, as will electronic systems with servo balancing or impedance-balanced outputs, but simple, symmetrical, dual‑active electronic output systems may well complain with distortion or blown output devices. Units with this kind of output circuitry generally prefer to have the cold side left disconnected when driving unbalanced inputs, so they require special unbalanced cables rather than standard ones. The manufacturers' manuals detail the appropriate wiring arrangements for unbalanced operation and should be consulted before connection to the Little Bustard. 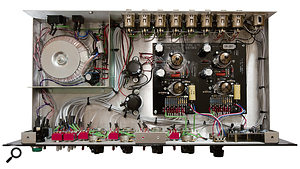 A peep inside the Little Bustard reveals the high quality and tidiness of the internal construction.Given that the cold side of the output sockets is also connected directly to chassis earth, ground-loop hums and buzzes might also be an issue in some installations. However, such problems would be the fault of the connected equipment rather than the Little Bustard itself, which easily sailed through my Windt Hummer test with no sign of ground‑related hum susceptibility at all.

Interestingly, the Fat Bustard has unbalanced I/O as well, as do several other Thermionic Culture products, because Mr Keary thinks they sound better in this configuration — and he may well have a point, not least because it reduces the valve and component count significantly! In a well-sorted installation with a sensible grounding arrangement, there really shouldn't be any issues with ground loops and, given the high-level signals being handled here, interference is very unlikely. However, in the real world not everything is designed as well as it should be, so the situation is rather unpredictable. In most cases I'm sure the Little Bustard will work extremely well, but some D‑A outputs may complain about the unbalanced arrangements, and some A‑Ds might be prone to ground‑related hums. Experimentation is the only easy way to find out.

The 16 line inputs are configured as six stereo pairs (inputs 1‑12) and four panable mono inputs (13‑16). The six stereo inputs are mixed in stereo straight to the mix bus at unity gain, via simple, white‑capped on‑off toggle switches. There are no faders, no balance controls and no other processing options. However, the four mono channels are each equipped with an on‑off toggle switch (with red cap), a rotary fader (strictly an attenuator as there is no 'gain in hand' at this stage) and separate rotary pan controls. Usefully, however, the pan controls can be bypassed using individual green‑capped toggle switches to feed the input signal equally to both sides of the stereo mix bus. This has the advantage of circumventing the 6dB attenuation imposed by the pan pot when central, introducing an additional 6dB of gain into the mono channel's signal path.

The mixing gain-stage is handled by a pair of low-noise, ECC83‑style double triodes, in this case Sovtek 7025s (12AX7WA), while the output driver employs a pair of PC86 single triodes (in this case the E86C variant). A pair of 31‑detent rotary potentiometer controls adjusts the output level of each bus individually, ranging from ‑18 to +2dB.

The rear panel of the Little Bustard. Despite the presence of XLRs, the inputs are unbalanced — because designer Vic Keary believes this configuration sounds better.The output metering is configured as a trio of LEDs for each channel. These are arranged as the glowing eyes of the Little Bustard graphic logo on the right-hand side of the front panel. Low output-signal levels (above ‑22dBu) are indicated with miniature yellow LEDs in the corners of the Bustard's eyes. As the output level rises above ‑4dBu, the main dual‑colour large LED eyes start to flash green, with red coming on for peaks above +8dBu. This arrangement is surprisingly effective, and as the metering is wired directly across the output sockets, it will reflect any output line-loading issues. In practice, of course, more detailed metering facilities will be provided by the A‑D converter employed to re‑digitise the mix signal.

The internal construction is very neat and well put together, with a linear power supply contained within a screened section of the case on the left-hand side, and the main circuit board occupying a modest area just off centre on the right-hand side. Lots of screened cables carry the input signals to the front-panel switches and attenuators, and then across to the circuit board, which uses conventional components throughout.

The Little Bustard is devoid of its fat sibling's varislope EQ, elliptic equaliser stereo-width facility and 'Attitude' distortion feature: it is a straightforward mixer, plain and simple — although it does introduce some typical valve distortion artifacts, especially when driven hard, which is rather nice.

Clearly, Thermionic's design intention is for the Bustard to be used to warm up digital recordings, accepting stereo tracks and stems (balanced using the DAW's fader automation or track editing) along with mono solo tracks from a multi‑channel interface or D‑A converter. These can be mixed together in the analogue domain with a modicum of classic valve coloration, returned to the interface or A‑D converter, and re‑digitised for mastering. In that role, the Little Bustard excels, delivering precisely what is expected: a subtle valve warming with musically appealing and progressive second‑harmonic distortion as the levels get hotter.

The Little Bustard is very well made and the controls all feel solid and reliable to use. Operation is entirely intuitive, and although the six stereo inputs all mix at unity gain, in practice this simplification is a very practical and acceptable one, given the versatility of DAW platforms. The technical specifications (see box, left) are good for a valve device like this, although there is much more to the sound character than the numbers! Although the Little Bustard can handle levels above +20dBu, I felt it started to sound strained and unattractive when driven really hard. Consequently, I would recommend partnering it with converters and interfaces configured for full levels (0dBFS) of no more than +20dBu and ideally +18dBu (the European standard).

I used the Bustard to handle the outputs of various multi‑mic sessions captured and edited in my SADiE LRX system, whose analogue I/O is configured for +18dBu peaks. This suited the Little Bustard perfectly: on appropriate material (rock, pop and jazz genres in particular), the results were very nice indeed, sounding noticeably fuller and richer than the original 'in‑the‑box' mixes, but without becoming too clichéd. I like my orchestral recordings to be clean, so I tried winding the levels down to see if I could make the character more subtle, and I could, but this also started to make the Bustard's noise floor more obvious in really quiet passages.

Overall, the Little Bustard does exactly what you would expect it to do, and it does it very well. On the face of it, the retail price is high for a box with such limited facilities, but the 'thermionic culture' it brings to a mix (geddit — see what I did there?) will easily justify it for a great many!

For a similar price, the Neve 8816 is a 16‑channel, 2U, rackmounting mixer (with an optional fader pack) that offers some interesting mix character, thanks to its classic Neve transformer mixing topology. It provides level, pan, solo and cue controls, all with snapshot memory facilities, plus a handy monitoring section and an optional A‑D card. The Phoenix Audio Nicerizer is another solid‑state, 16-channel mixer, with class‑A circuitry, a transformer output and a stereo width control. If you're looking for a valve device, TL Audio's M1 Tubetracker console employs a hybrid signal path to cater for eight inputs plus an ADAT interface, and provides the full range of console facilities. For a slightly higher cost, the Cranesong Egret (returning to the bird theme once again!) not only provides eight channels of mixing in a rackmount box, but also includes the D‑A converters and provides insert points to accommodate other analogue outboard.

Using an Audio Precision APx525 test system, the overall gain through the Little Bustard, using stereo input 1‑2 and with the output attenuators at the marked zero position, gave a loss of 4dB, although channel matching was within 0.1dB. The dynamic range (using the AES17 measurement standard) was 89dB with a +24dBu input, and the more conventional signal‑to‑noise ratio was a similar 90.7dB. Crosstalk is a modest ‑52dB. 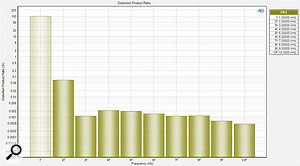 At moderately high input levels (+18dBu in this case), the Bustard's character is strongly influenced by second-harmonic distortion.

Looking at the THD+N figure against output level graph, the combined noise and distortion remains below 66dBu for all input levels up to about zero, thereafter rising steeply as the valve circuits become increasingly non‑linear. For signals below 0dBu, the distortion products are low in level and well balanced, with no dominant harmonic coloration, but as the signal level rises, a very clear second harmonic becomes evident up until about +18dBu. At very high levels, the distortion becomes balanced again and much higher in level, so clearly the Little Bustard provides the nicest warming character when working with signals between 0 and +18dBu.

The frequency response is well within 0.5dB from 20Hz to well above 30kHz. It falls off rapidly below 12Hz, and channel matching remains within 0.1dB across the full bandwidth.

Overall, the technical specifications are very good for a product of this type, although the noise floor is inevitably higher than a solid‑state device might manage, and it would pay to keep signal peaks below +20dBu.

The Little Bustard was conceived primarily as an expander unit for the Fat Bustard, and continues that model's philosophy on sound character. But it also serves extremely well as a stand-alone mixer in its own right and, while the facilities are limited, it delivers the goods when it comes to the core task of mixing signals in the analogue domain with character and a degree of attitude.