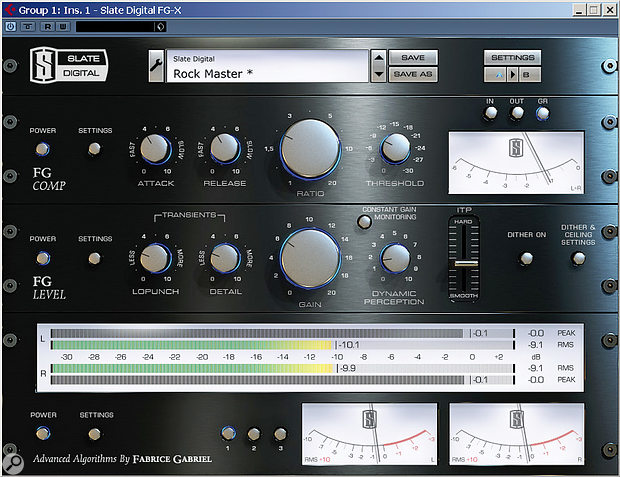 The idea that loud digital masters can retain real dynamics seems like a contradiction in terms, but it's exactly what Slate Digital are claiming for their new mastering plug‑in.

There are some activities, like unblocking toilets or telling the children the cat has died, that everyone has to do, even though no‑one much likes doing them. And for audio engineers, making mixes loud looms high on this list. We can complain about the loss of those dynamic contrasts we put so much effort into capturing in the first place. We can point out until we're blue in the face that quieter mixes might actually sound better on the radio. But at the end of the day, we have to pay the bills, and it's a rare client who is happy to have his or her master half as loud as commercial releases in the same genre.

Like it or not, we have to make our masters loud; and, that being the case, we might as well do so in the way that causes least possible damage. Making a mix louder usually involves both ironing out 'macro', or medium‑ to large‑scale dynamic contrasts — such as the gulf in level between a quiet verse and a busy chorus, or between a loud snare hit and the space after it — and taming 'micro‑dynamics', the momentary peaks that are often known as transients. The former are usually tackled using a conventional compressor, while there are various approaches to dealing with transients. Traditionally, one would use a peak limiter (in other words, a compressor with a very fast attack and release, and an infinite ratio setting); some engineers find it more forgiving to apply other forms of signal distortion such as tape‑style saturation, or simply to clip the input of an A‑D converter, but there is always a trade‑off between sound quality and the degree by which transients can be attenuated.

The main selling point of Slate Digital's FGX mastering processor is a new approach to the second part of the process. Called Intelligent Transient Preservation, or ITP, it is claimed to let the user raise the average level of the mix — in other words, make it louder — without reducing the impact and liveliness of transients within it. FGX was developed in conjunction with Fabrice Gabriel, the man behind Eiosis's superb E2 Transienter, who clearly knows a thing or two about dynamics processing! It's authorised to an iLok key, and is available on Mac and PC in all the usual plug‑in formats.

FGX is designed as a complete mastering dynamics processor, so the first stage of processing that your signal encounters is a conventional compressor. This is not intended as a 'character' device, but is designed to be as transparent as possible, and I think few would disagree that it meets this goal. There are no surprises in the parameter set, but one feature that's not immediately apparent is its ability to act as an auto‑leveller: with slow attack and release times, it won't affect the dynamics within a verse or chorus, but will invisibly balance levels on a song‑wide scale.

A nice touch is that almost everything is configurable through a pop‑up window. So if, for instance, you want finer control over the Ratio setting and only ever use low compression ratios, you can have the dial run from 1:1 to 5:1 or 10:1 instead of the default 20:1. This is perhaps a good time to mention another consistent highlight of FGX: excellent and highly configurable metering. Not only can you switch the compressor's VU meter to show input, output or gain reduction, for example, but you can also separately set the range of values and needle ballistics in each case.

Nice though it is, most users will view the FG Comp section as an hors d'oeuvre for the main course: the FG Level processor. As on a typical peak limiter, the main control is a simple Gain knob. This, however, is joined by some rather less familiar functions, one of the most valuable of which is accessed by a small push‑putton just next to the Gain control. Constant Gain Monitoring, as the name suggests, level‑matches the output of FGX with the dry signal, enabling accurate A/B comparisons, so you can hear exactly what the processing is doing to your signal. It doesn't always get the level matching spot on, but it's still very handy, and I wish all mastering processors implemented this feature. Metering for the FG Level processor is even more comprehensive than for the compressor: both the massive bar‑graph and the twin VUs are fully configurable, and you can switch between three different stored metering configurations with a simple click. And talking of meters, when you activate the FG Level section, the chances are that you'll see your DAW's CPU consumption leap up. This is a complex plug‑in that demands significant computer resources to run: not a problem in a typical mastering session, but it will certainly cramp your style if you try to use it over the mix bus.

Slate Digital are coy about exactly how Intelligent Transient Preservation works, but the documentation suggests that it somehow divides transients up according to where they fall in the frequency range, and tailors a "saturation curve” to suit. User control over the process is managed through three dials labelled Lo Punch, Details and Dynamic Perception, plus a 'character' slider, which sets the global characteristics of the transient saturation and runs from 'Hard' to 'Soft'. All four controls are well named. Lo Punch adds impact to kick-drum hits and bass‑guitar notes, Details brings higher‑up transients such as snare hits and acoustic guitar note attacks into focus, while Dynamic Perception seems designed to enhance or suppress transients regardless of their level in the mix, and is particularly useful for bringing up low‑level transient information without overtly changing the balance of the mix as a whole.

The Character slider, meanwhile, seems to have most effect on the loudest transients — in other words, the ones that are actually hitting the threshold and causing peak saturation to kick in. Conventional peak limiting usually causes these to sound smeared and weak when pushed too far. FGX, by contrast, does a remarkable job of retaining impact and punch on drum fills and the like. 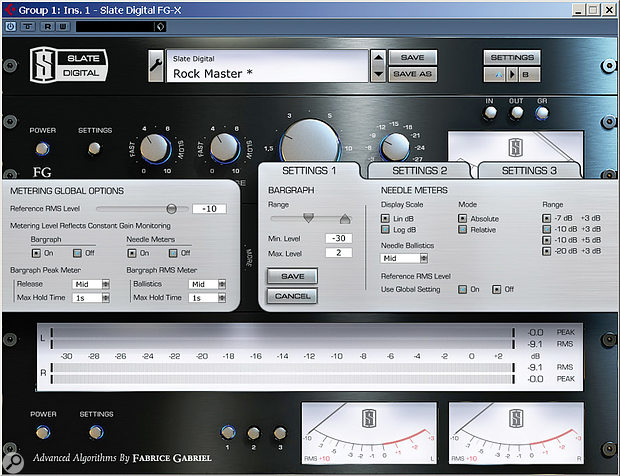 The neat FGX interface places only the most important parameters on the main page: configuration and utility controls are accessed through pop‑up windows.

If you're used to a conventional limiter, Slate FGX can require some familiarisation. As with limiters, you'd typically find out how far you can take the process for a given track by pushing the Gain knob up until unpleasant audible artifacts become apparent, then bring it back slightly. You can then adopt a similar approach to the Lo Punch, Details and Dynamic Perception dials. However, the nature of the artifacts that FG‑X produces when pushed too far is often rather different from what you get with other mastering processors. On some material and with some settings, the first ugliness you'll notice is a roughness on sustained low‑end notes, especially bass guitars. In other circumstances, the drum and cymbal transients begin to sound 'papery' and slightly detached from the rest of the mix.

The pursuit of loudness is at its most relentless in rock and metal, and it's with this sort of material that FGX is at its most impressive. It has an amazing ability to preserve and even enhance transients within a dense mix, whilst pushing it to the sort of RMS level that would leave other mastering processors gasping. On at least half of the test tracks I put through it, the competition was left for dust, and on most of the others, FGX was at least as good as the competition. For example, I dug up three rough mixes from an old project that consisted of rock drums, electric bass, acoustic guitar and vocals, and A/B'ed them through FGX and Waves' L3 multi‑band limiter. On the first one, the difference was jaw‑dropping. Where abusing L3 completely altered the mix balance, pushing the snare into the background, pulling forward the reverb and doing nasty things to the acoustic guitar, FGX showed an almost spooky ability to go on making it louder and louder without causing any audible side‑effects at all.

The second of the three mixes was a closer affair, although FGX's ability to preserve and actually enhance the transient detail handed it the crown in the end. The third mix was a case of swings and roundabouts. L3 undoubtedly robbed the mix of its dynamic punch and impact, especially at the low end, and when both processors were used in moderation, FGX sounded much the better. When pushed further, however, L3 behaved much more gracefully — I still wouldn't have wanted to listen to the results, but they were more pleasant than the harsh distortion that FG‑X began to introduce on vocals and kick drums. This pattern was repeated on a couple of test tracks that departed from the rock/pop/metal axis: where the mix was dominated by sustained sounds with lots of low end, rather than by drums or other transient‑rich sources, FGX's FG Level processor simply introduced distortion, while L3 allowed a significant gain increase with minimal side‑effects. (With such mixes, one could, of course, use the FG Comp section to similar effect!) In general, I also found that FGX worked much better when there was some headroom on the source material to begin with.

No mastering engineer would expect one processor to take care of all the different material that comes through the studio door, and FGX will not change that. Yet the styles of music for which it's less successful are, by and large, those where loudness is not so much of an issue in any case. FGX is designed for those who master rock, pop or metal, and need it to be as loud as possible. Everyone who does so should try this plug‑in out, because it really is a step above the competition. It's not too much of an exaggeration to say that listeners of the future may be able to pinpoint the moment FGX was released just by listening to the CDs that were made before and after!