Sonuus' nifty gadgets make real-time audio-to-MIDI conversion easy and affordable — as long as you only play one note at a time! 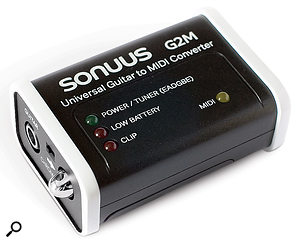 The Sonuus range of audio-to-MIDI converters makes entering into the world of MIDI sounds and MIDI recording about as simple as it could be for a guitarist. The units require no special pickup or cabling: you simply plug your guitar in one end of the small box and MIDI comes out of the other end. Too good to be true? Well, yes, and no. It is as simple as that, and most of the time it works straight out of the box, but the trade-off for this simplicity is that it can only work monophonically (ie. one note at a time). There may come a day when digital audio processing algorithms are sophisticated enough to pick out multiple discrete notes within a composite audio stream in real time (Celemony Software's Melodyne can already do it as an off-line process), but that day is not here yet. Pitch-to-MIDI conversion systems normally require guitarists to fit an additional, hexaphonic (six-channel) pickup that outputs a separate signal for each string, so that the notes within a chord can each be individually analysed and converted to MIDI. The designers at UK-based Sonuus, however, calculate that there's an awful lot you can still do with a monophonic system, and I'm inclined to agree with them. Bass lines, and lead melody lines or instrumental solos, tend to be inherently monophonic anyway, and that's a lot of musical ground covered straight away.

We had two systems on test at SOS: the battery-powered G2M V2 — an updated version of the original Sonuus G2M box — and the i2M Musicport, which connects (and is powered) via USB, and which also has some useful software support in the form of the i2M Musicport Desktop Editor (the range is completed by the B2M dedicated bass-to-MIDI unit). If you are one of the people who, like me, tried the original G2M and thought it a bit on the slow side, you'll be pleased to know that the new 'go faster' V2 version does indeed go faster! It is now about as fast as anything else pitch-to-MIDI-based out there, which puts it in the same league as the (sadly, recently discontinued, I believe) Axon range. At around 5ms conversion time, the top two octaves offer no perceptible delay, the middle octaves are still manageable on all but the most percussive of sounds and only the lowest guitar octave is to be avoided, with latency reaching 19ms by open bottom 'E'. Even that isn't the limitation you might think: you can always, as MIDI guitarists have been doing for years, play your bass lines high up the neck whilst transposing the voice module or your software's input processing down to the required register.

The pitch-to-MIDI process outputs pitch-bend messages for any deviation from concert pitch, so it's important that your guitar is in tune, and there's a basic but effective on-board tuner to assist with this. New in V2, however, is an optional chromatic output mode, which doesn't use pitch-bend, so that notes are quantised to the nearest semitone; it's still important to be in tune, though, to ensure correct analysis of your intended notes.

Equally important is ensuring that the input level is correct. Excessive input level sufficient to cause clipping will hinder the pitch analysis process (there's an LED to indicate this), whilst playing too safe with the level will limit the amount of sustain available as the input signal decays below the fixed internal cutoff threshold. Finding a happy medium is not too difficult unless you're running the Sonuus alongside your normal guitar signal and have a tendency to ride your volume control over a very wide range.

Any MIDI controller instrument is dependent on its MIDI voice source being set up in the right way for the two to mesh as a playable instrument. It's all too easy to plug in to something with a slow attack and the wrong pitch-bend range and think that the Sonuus box doesn't really work very well. In fact, it does; you just need to make sure the voice module is correctly set up for its input. The G2M's primary mis-tracking vice appears to be misjudging the octave, but heeding the advice in the manual to use the neck pickup seemed to clean that up considerably, and attacking relatively lightly with the right hand seemed to produce the cleanest, most accurate results for me. 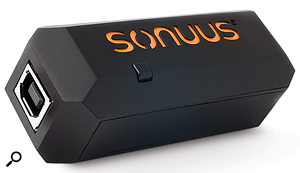 The diminutive i2M Musicport offers similar performance to the G2M V2 in a package optimised for use with a computer running software instruments or a DAW package. It also includes a 16-bit 48kHz audio interface, which could get you out of trouble at a push but won't be the main reason for anyone buying this box, I feel. Registering the product at www.sonuus.com allows you to download a useful Mac and PC-compatible control utility — i2M Musicport Desktop Editor Software — with which you can both finesse the i2M's note detection and enhance its MIDI output with zoning and multiple output streams, creating the possibility of layered voices and even a limited degree of harmony generation.

For such an apparently simple unit, there's a surprisingly useful number of parameters on offer, all of which can be saved as one of four presets, or Operating Modes. Presets are optimised for the note ranges and characteristics of a number of specific source instruments — guitar, four-string bass, five-string bass, voice/wind — and whilst it is not explicitly stated in the good supporting documentation, I think it's fair to assume that the correct choice of instrument here allows the conversion system to work more accurately or efficiently because it knows it can ignore out-of-range notes or noises.

There are also four user-determined MIDI Configurations, with up to six zones available, and with each zone offering Note Range; Hold On/Off; Chromatic or Pitch-bend mode; Pitch-bend range; Transpose setting; Note Constrainer (which folds back out-of-range notes into the 'constrained zone'); Note Extend (in ms); and finally MIDI channel. Note Extend delays the sending of note-off message by the user-set amount to give the impression of legato playing in the MIDI output, when actually the player is stopping each note slightly early in order to pick the next one cleanly and unambiguously.

Velocity response can be optimised, with up to six steps above or below the default linear setting, shaping the relationship between how hard you have to play to generate different levels of MIDI note velocity, and a Velocity Filter setting allows the exclusion of the kind of very low-velocity notes that are all too easily accidently generated on guitars as you move from note to note. There are also Breath Controller and Note Hold options, taking the i2M way beyond the capabilities of the G2M V2. The i2M also offers input gain adjustment, via the software, allowing it to be optimised for a wider range of source instruments — the 10MΩ input impedance of the analogue stage helps here too, ensuring that there is no 'loading' of passive, high-impedance sources. 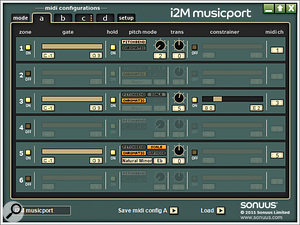 Of course, nearly every DAW package now contains a respectable pitch-to-MIDI conversion processor, so if you are content to play your potential MIDI parts as guitar lines and convert them afterwards, you don't need a box like this at all. Personally, I find I play much better MIDI lines when I am able to hear the response of the voice as I am playing it, and therefore find real-time conversion processes far more satisfactory.

Like the G2M V2, the i2M works straight out of the box, with most sources most of the time. With guitars it generates MIDI fast enough for expressive real-time playing and clean enough not to require hours of time spent cleaning up double triggers and spurious notes. Using a bass, four or five-string, as a source instrument for programming (ie. recording MIDI) was less satisfactory, in my experience, requiring you to always play in the higher registers to keep the timing reasonable. And if you can't play the bass as you would normally, you might as well play the part from a guitar and transpose the MIDI into the required register, I feel. I can, however, see a performance application for it with basses, used for doubling a real bass sound with a synth. Provided that the synth doesn't have a prominent attack to its voice, you can get it to sit nicely behind the natural bass sound and support it with either more depth or greater harmonic complexity.

The last thing I tried, noticing that there was a wind/voice option in the source instrument list, was a microphone. I can confirm that it works — you sing notes into the mic and MIDI comes out of the Sonuus — and I can confirm also that I'm not a good enough singer to do useful work with it that way. It would always be quicker for me to play the lines on a guitar. Somebody who is a decent singer, but no kind of instrumentalist could, I think, do useful programming work with this, especially with the help of chromatic mode and a little editing. It requires a little care with the attack of your notes — avoiding potentially pitch-ambiguous consonants and plosives in favour of a clearly articulated "Aaahhh” for each note seemed to give the best results.

I noticed also that in the Sonuus users' forum, there is a sax player apparently getting good results doubling his instrument in a live context, so if it works there, with the potential problems of separation and spill, it should certainly be OK in the more controlled environment of a recording context. I wasn't able to summon up a friendly wind player in time to verify this personally, so try before you buy if you are interested in a Sonuus primarily for that facility.

I have to admit, I was pleasantly surprised by how useful a monophonic MIDI converter actually is! Whilst other tools, from the Starr Ztar to the You Rock Guitar (reviewed in SOS August 2011) are clearly preferable for keyboard-like parts, neither of them excels at flowing legato lines, which tend to be, in the main, monophonic... like the Sonuus. These highly affordable little boxes do clean, reliable real-time pitch-to-MIDI in as simple a package as you can imagine, and so long as you already know how to set up the MIDI end of things, this is as 'plug and play' as it gets. There will always be some editing to be done with MIDI recordings derived from guitars, with the occasional scuff or ambiguous attack generating an incorrect note or a double Note On, simply because guitars are not keyboards, and MIDI is the language of the keyboard. But I experienced very few errors, overall: no stuck notes; no long sustained notes being cut off by spurious short notes; just the occasional octave jump or random warble. In short, the Sonuus system operates well enough to do serious work. If you want easy, real-time pitch-to-MIDI and you can work with a monophonic system, I can heartily recommend both these units.

If you just want to emulate keyboard parts, you'd be better off looking at the You Rock Guitar or Starr Ztar, but if you need pitch-to-MIDI and polyphony, your options are limited to one of the Roland systems, GR55 or VG99. If you want reliable monophonic pitch-to-MIDI in an easy-to-use package, this is it.

Pitch-to-MIDI for live performance or DAW programming, made as simple as it can be. If you can work with the one big limitation, this will get the job done with the minimum of hassle.