The portable audio pioneers release their smallest and most affordable handheld 24‑bit/96kHz recorder yet. We put it through its paces. 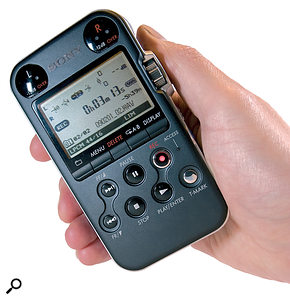 Anyone looking to buy a pocket‑sized digital recording device is totally spoiled for choice these days. Not only have numerous manufacturers had a stab at producing something for the market, but the leading products have now reached their second or third generations, benefiting from years of customer feedback and improvements in data-storage technology.

The PCM M10B is one of these third‑generation devices, following on from Sony's top‑end PCMD1 and mid‑priced PCMD50 stereo recorders. The M10B is by no means the cheapest recorder on the market, but it's less expensive than the aforementioned D1 and D50, and is the company's most affordable offering.

It's fair to say that the M10 has borrowed much from its pricier siblings, although in comparison with them it loses out in areas like signal‑to‑noise ratio, line in/out THD figures and optical connectivity. One important area where Sony have clearly cut costs is the design of the microphones, which are built into the case and cannot be moved into an X‑Y formation. In contrast, the PCMD50 offers X‑Y and Wide Stereo, by way of two adjustable microphones externally mounted on its nose. That said, at the expense of robustness, the M10 is lighter, and it offers more file-formatting options (direct-to-MP3 recording, for example) to suit consumer uses.

It ships with a respectable 4GB of on‑board memory, about 400MB of which is taken up by the management OS. The storage can be expanded up to a total of 20GB, using 16GB MicroSD or M2 cards plugged into a side slot. The combined record capacity is achieved by the implementation of a RAID‑style feature that treats the on‑board and card storage as one. Still, the included 4GB alone provides 1.55 hours recording at the highest record setting of 24‑bit/96kHz — which is long enough for a concert, for example — and much more at lower resolutions.

All the features we've come to expect of a product of this kind are present. There are the usual transport controls necessary for navigating through audio files and menus, as well as USB connectivity, a headphone output, and line and external mic inputs. Hardware controls provide instant play volume, record level and mic sensitivity (a 'hi/low' switch) adjustment, and there are buttons for setting up A‑B repeat markers, deleting files and accessing menu items. There's also a built‑in speaker for auditioning what's been recorded, which is powerful enough to be heard from a few feet away. And, of course, the M10 also doubles as a Walkman‑style audio player, and allows the import of audio files via USB.

Detailed level metering is provided by on-screen bar-graphs, but there are also two LEDs next to each mic, one lighting green when levels reach ‑12dB, the other glowing red to indicate clipping, greatly aiding the setting and monitoring of record levels.

Generally, this recorder doesn't go overboard on non‑essential features (such as effects processors), but there are a few that deserve a mention. Firstly, it's possible to set the playback speed anywhere from ‑75 to +100 percent, and then bring the change in and out as required using a hardware switch. Similarly, the Key Control function shifts the key up and down without affecting the speed, although there's no hardware on/off switch for this. The other neat feature is a five‑second buffer setting, which allows the operator the chance of capturing the impromptu start of something, even if record is pressed late. 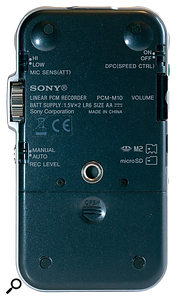 The rear panel of the Sony PCM M10B.

When the review model arrived, it didn't have a manual with it, so I thought the obvious test was to see if operation was simple enough that I didn't need one. Happily, clear labelling of all the controls and the large, information‑rich screen make it very intuitive — and it's perfectly possible to set up levels, adjust the important settings and start recording without the need for instructions. Using the marker and A‑B repeat functions, for example, only took me a few seconds to figure out.

A few facilities require slightly greater contemplation — such as how the file editing features are organised, for example — but Sony have kept settings simple enough that operation remains within the reach of 'prosumers' with little or no music technology experience. The limiter setting, for example, cannot be adjusted and is either on or off, and the same is the case for the low‑pass filter.

The remote is a very welcome accessory, eliminating troublesome transport-control handling noise when the M10 is tripod‑mounted, using a threaded hole on its underside. Other manufacturers have tried all sorts of tricks to reduce handling noise, including rubberised coatings and intelligent software filters, with varying degrees of success, but none of them seriously competes with remote operation. That said, the M10 doesn't seem to suffer from the usual ear‑splitting bumps that handling can feed into the mics, and in that respect it's significantly better than other products I've tried. 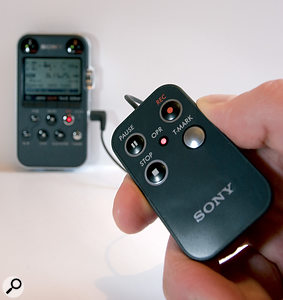 The remote control helps to avoid the handling‑noise issues that are inherent in many portable recorder designs.The use of standard batteries is a plus in my book, as they're easily replaced, unlike bespoke power packs. Computer connection via USB is a must these days and Sony have implemented it very well.

Size wise, the device is a little smaller in every direction than the Tascam DR1 I had to hand for comparison, and is just right for the pocket. Of course, much smaller devices exist, and they're better suited for carrying about all the time, but Sony's design sacrifices absolute miniaturisation for practicality. The screen, for example, is impressively wide for such a small thing, taking up as much space as the casing allows. A lot of information is displayed at any one time, and yet it all somehow remains clear and uncluttered. A little analysis reveals that Sony achieved this by the clever use of different sizes and styles of fonts, informative icons and good positioning of each information block.

Although some buttons are located along the bottom edge of the M10's casing, and their labelling is printed on the underside of it, they are at least cut into the case's corners, so that the raised rubber feet prevent them from being moved by table‑surface friction.

There are a few adjustments that could still do with being assigned to a button (or at least being put at the top of a menu), but which are currently buried deep within submenus. For example, the limiter on‑off switch is six positions up/down from entry into the Detail menu, which itself is seven options up/down within the main menu list. Similarly, the audio output switch from Headphones to Line Out (why doesn't it do both at once?) is also located deep within the same menu.

One further gripe is that renaming folders and files is left to the computer: a means of doing this on‑board, no matter how tedious, would be a welcome addition, as it's something that could be undertaken on the train or during down time at a recording session.

Being able to record at 96kHz with 24‑bit resolution is all well and good, and many products now offer this facility, but the on‑board mics and circuitry must still deliver the goods. I tested stereo performance by recording groups of chatting people in a room, some close and others in the background, and the audio balance using a variety of acoustic guitar and vocal setups. Overall the recordings were impressively well balanced, if lacking just a little at the bottom end. They were also remarkably clean: people speaking from the other side of a large room could be heard clearly, even when levels were set to accommodate people much closer to the mics.

While it faces stiff opposition from a fair number of competing products, some of which offer more features (the Zoom H4N, for example, can record four tracks simultaneously using external mics, provides more microphone position settings, includes effects and has XLR inputs), the Sony brand provides a certain guarantee of thoroughness and quality that's worth something in itself. What problems it has are minor and, even though it sits at the bottom of a product range, it has benefited from tweaks made to the PCMD1 and D50 designs. To sum up, the M10 is the perfect size for the hand and pocket, records very nicely, and offers a set of controls that are both ergonomically very practical and visually appealing.

There are many similar products to choose from at the moment, the most comparable being the Zoom H4N, Tascam DR100, Olympus LS10 and LS11, Yamaha Pocketrak CX, Marantz PMD620 and Edirol R09 HR.

Sony have thought hard about what the user needs to know and do, made sure that the M10 gives them all the feedback they need, and have delivered it all in an ergonomically efficient and attractive little package.