I’ve been aware of Sound Radix’s SurferEQ for a few years now but, for some reason, have only recently managed to find the time to give it a thorough test drive. I’m smitten!

In essence, this is a ‘pitch-tracking equaliser’. The basic idea is that the plug-in detects the dominant frequency or pitch of the incoming audio, in much the same way as a tuner or pitch-correction processor does; then, on the basis of that information, it shifts the EQ curve you’ve dialled in up or down the frequency spectrum to follow changes in the detected pitch. The reason this is so wonderful is that it boosts and cuts the same harmonic information regardless of the note played — and that means that the result sounds much smoother than when boosting or cutting melodic material with a conventional EQ. It works well with any melodic sound, including vocals, but perhaps the best example is when using it on a bass guitar. You can EQ to bring up or attenuate certain harmonics, and that character remains pretty consistent whatever note is played. Another scenario where it shines is when you wish to cut some mud from the 180-220 Hz sort of area. I often find myself wanting to do this with electric bass, but end up battling to prevent the EQ cuts altering the level of some of the notes to an unacceptable degree. With SurferEQ you can target that area in such a way that the EQ curve moves neatly out of the way when they would otherwise interfere. It’s worth noting that SurferEQ also functions as a standard EQ. In other words, you can turn the ‘surf’ function off on a per-band basis (though there’s no master surf-bypass control, unfortunately). 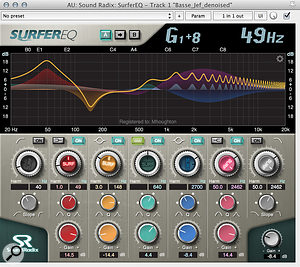 In terms of basic control, there are five proportional-Q bands where you select from four basic Q settings, with the curve getting narrower the more you boost or cut. The first and last of these bands may be switched, if you prefer, to act as shelving filters, and there are two further variable high- and low-pass filters. An interesting facility is a special ‘harmonic filter’, which boosts/cuts all the harmonics going up the spectrum, as indicated by a rippling line. This interacts with the other boosts and cuts to give you some unique and very useful sounds.

Sound Radix say that they’ve designed the EQ algorithms themselves, rather than rely on a code library. I have no idea how to check that point, but can say that the results sound impressive, very smooth and analogue-like. My one disappointment was that I was unable to dial in a narrower Q setting. In a way, it’s understandable, as ‘surgical’ EQ won’t typically need to ‘surf’ in this way, and you could use another EQ for most such jobs. However, narrower Q options would make this more usable as a general-purpose EQ plug-in, and would also enable you to create more complex curves with, say, a broad boost followed by a small dip, which can be useful sometimes — it would be great to be able to have a surfing version of that. Perhaps that will come in a future update, but quite honestly I don’t mind if it never happens, as this is just such a unique, great-sounding and intuitive plug-in already. There may be cheaper EQs out there, but there’s nothing else like it. Matt Houghton