Available ready‑made or in kit form, the STS is more affordable than the competition... but is it any good?

Analogue tape machines have an undeniable cool factor, but anyone who's done much work with tape will know they can be a pain to work with: they break down, parts wear out and aren't easily replaceable, they require regular maintenance, fresh tape is expensive, you don't always have control over the 'effects' you're looking for... and so on.

Still, analogue tape can do some pleasant things to audio, due to many factors: saturation, the 'head bump' at the low end, the non-linear frequency response, the tape formulation itself, wow and flutter, and the noise of the analogue circuitry, to name just a handful. The general sound of tape is a recognisable one, and it has graced so many tracks over the years that we've become accustomed to it — which is probably one reason why it often seems to be pleasing.

Tape is not a magic bullet, by any means, and the effect is typically much more subtle than many people suppose. But it's an incredibly useful tool to have in your sonic arsenal, and that's why outboard and software designers alike have tried to capture the essence of analogue tape machines in recent years. Several (not all!) of the plug‑ins yield a reasonable approximation of the tape sound, but I'd class many as 'effects' — in that the results are often far more coloured than those you'd typically get from a well set‑up tape machine. There are some more impressive plug‑ins, though, including Digidesign's Reel Tape Suite (and there are promising rumours coming from Universal Audio too!).

The best simulations I've heard, though, are outboard products that use analogue electronics. Cranesong, Rupert Neve Designs, Empirical Labs and Anamod, for example, all make such devices. Some of these are intended to model specific tape formulations and machines (as in the case of Anamod's ATS1), while others just emulate certain aspects, using inductors to provide the effect of the tape heads (as in the Rupert Neve Designs Portico 5042).

The latest outboard device to be added to this growing list is Sound Skulptor's STS (Stereo Tape Simulator), and its approach is very much along the lines of the Rupert Neve Designs Portico 5042, reviewed back in SOS July 2007. However, there are a few differences, and it's rather more affordable, particularly if you can wield a soldering iron with any degree of competence: the STS is available as a ready‑made unit, or in full or more skeletal DIY kit forms. The kits aren't just about keeping the price down, though; they also mean that the design can be customised. You can custom‑mount several units in a single box, for example — or I suppose you could even build some into a console if you wished! 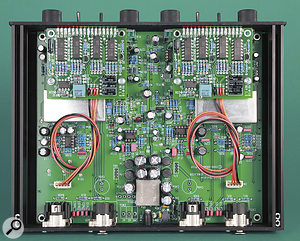 Most of the electronic wizardry, including the inductors, is hosted neatly on a single PCB.

Both to save time and ensure I had the product as the designer intended, I evaluated a ready-assembled unit. I must say, though, that peeping under the lid and browsing the clearly written instructions I didn't see anything too daunting, should your wallet or curiosity lead you to take on the DIY challenge.

Coming in a 1U-high half‑rack-width black metal chassis, the STS is compact but sturdy, and removing the case lid revealed a neatly assembled device, with all the components other than the two LED meters cleanly laid out on a single circuit board. Like the Portico design, it is an entirely analogue device, and employs inductors in lieu of tape heads. However, there are no transformers here: instead this design uses high-quality ICs, such as the THAT Corporation 1646 line drivers.

There are very few controls, making the STS easy to operate: the front panel is dominated by four knobs, one on each channel to control input gain (and thus the amount of the effect), and another to set the output level. Unfortunately, when working in stereo, you'll have to match the effect and output levels by eye/ear. That's not necessarily a huge hardship, but detented controls would make things easier in that respect. There are also two toggle switches per channel, one operating a hard bypass, and the other setting the simulated tape speed — you're presented with the option of 7.5, 15 or 30 inches per second for each channel. A 16‑LED meter above each channel is used to monitor the input levels. Around the back are an inlet for DC power (a PSU is provided with the assembled unit and full kit), and four balanced XLRs provide the analogue I/O for the two channels.

The important thing, of course, is the sound — and my first reaction was that the results were aesthetically very pleasing. But you could say that about a compressor with transformers... so does it actually sound like tape? Well, you certainly get the sound of the head 'bump', and flipping between the different tape speeds brought that effect at different frequencies, just as you'd expect (in the 100Hz region for 15ips, lower at 30ips and higher still for 7.5ips).

Running a few different sources through the STS at different speeds and different gain settings, it always seemed quite effortlessly to impart a silky‑smooth tape‑ish character to pretty much everything I threw at it: guitars, bass, synths, vocals, rock drums and hand percussion. The 30ips setting was subtle, but pleasant. At 7.5ips, things started to sound warmer and the top end started to roll off, as you'd expect; and at 15ips on a drum bus I was rewarded with that familiar rock sound, with everything gelling nicely, the head bump doing the right things to the kick and bass and the snare doing, well, doing what it should! Cranking the input increased the process into effect territory, with warm saturation giving way to an over‑cooked tape sound.

I then put the STS head to head (groan!) with an RND Portico 5042. Words alone won't be enough to convey the subtle differences, so I recorded some audio files which we've placed on the SOS web site (/sos/jan11/articles/soundskulptorstsaudio.htm) for your edification and enjoyment.

Both the 5042 and the STS gave a more realistic approximation of the effects of tape than any of the plug‑ins I had available in my DAW. The plug‑ins seemed to cope less well with the difficult mid‑range in particular: snare drums and the top end of distorted guitars in particular seemed noticeably more pleasantly 'glued in place' by the hardware.

The 5042 can be very subtle, but I found it capable of more colourful results than the STS, no doubt in part down to the transformers. The STS, though, was capable of greater subtlety — possibly precisely because it lacks transformers! So to some extent it's purely a question of which sound you prefer. Personally, I'd be more than happy running a signal through a nice preamp with transformers and then into the STS. While such an approach might be less convenient than using the Portico, it is also more flexible.

I was genuinely impressed by the Sound Skulptor STS. Not only is it considerably more affordable than the hardware competition, but it can also hold its head high in that company. Like other tape emulations, it offers the advantages over tape that you can use it in real time (as a parallel effect for example, should you want to) and it requires no maintenance.

Given the choice, would I use it in place of a real tape machine? Yes: it might not be quite the same, but there's more than enough of the character here to be useful, it's capable of subtle processing and less subtle effects, and it has absolutely none of the drawbacks of working with tape that I mentioned earlier. The best emulation I've heard remains the Anamod ATS1, but I'd need to be earning considerably more money to justify that expense for an effect that's so subtle in the grand scheme of things. It fares well against the more obvious competition too: I'd find it a tough call to choose between the 5042 and the STS, and I'd easily find a place for both processors in my studio.

In short, it has to be said that if you're realistic in your expectations of what analogue tape can do to process a sound, then the STS is well worth the money than Sound Skulptor ask for it. What's more, if you're sufficiently confident in your DIY abilities I'd suggest that in kit form it's something of a bargain.

Several plug‑ins, including some freeware ones, purport to emulate the characteristics of analogue tape and tape machines. The best, though, aren't cheap, and some are only available for use in Pro Tools. There are fewer hardware alternatives: all are more expensive, and they're discussed in passing in the main text. Of course, you could set yourself the challenge of running and maintaining a real tape machine!

The STS offers a decent simulation of the more pleasing aspects of analogue tape, without any of the drawbacks — and it's cheaper than the competition too.