San Francisco-based Soundiron’s impressively esoteric product list includes a substantial collection of choir and solo vocal libraries, exotic tuned percussion, banging ethnic drums, world wind and stringed instruments, electronic ambiences and a huge host of other weird and wonderful titles: Snow Drums and Tuned Artillery, anyone? On paper, the company’s Elysium Harp (14.7GB installed) may appear to be one of their more conventional offerings, but there’s more to it than meets the eye. 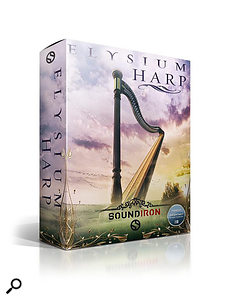 The star turn of this enterprise is a 47-string concert pedal harp recorded in a studio from three mic positions, only two of which can be heard at one time. Patches load with the close-sounding front pair in place, which exhibits ultra-clear definition and a pronounced note attack. While that works well for folk-harp styles, the more rounded tone of the other positions is a better bet for orchestral work. Presence and Body controls, on-board reverb and a handy sample offset knob can be used to further soften the attack, giving a more traditional and natural-sounding ‘classical’ harp sound.

You can play this chromatically sampled harp like a piano, or dial up some of its 194 played glissandi performed by harpist Jennifer Ellis. These are presented in 19 different styles in the keys of C, Eb and F#: to access other keys, use Kontakt’s ‘Tune’ knob! Though beautifully played, the glisses (which include hard, soft and fingernails variations in the key of C) are incorrectly labelled: dominant 7th scales are listed as ‘major 7’, and the so-called ‘F# diminished’ is actually a straight D major scale. D’oh! If you don’t find the scale you want in the glissandi presets, a built-in Gliss Generator with 14 different patterns makes it easy to create automatic glisses in real-time. EDM fans will also appreciate the Arpeggiator window, a great source of rhythmic melodic patterns.

For those who like to play their own glissando sweeps, Soundiron’s Pedal system turns off the black notes and allows you to flail away on the white keys. This feature supplies 74 common harp tuning presets, but I wasn’t able to create a custom scale — for the most part, the seven pedal settings refused to acknowledge my increasingly frantic mouse clicks. A few such minor musical quibbles apart, this is a great-sounding, deep-sampled harp with applications for many musical styles, which works in Kontakt or the free Kontakt Player version 5.5.2 and later.