The enduring appeal of the Theremin must surely have something to do with its eerie and unearthly sound, which has been put to good use by everyone from avant garde classical composers, to science-fiction score writers and experimental pop artists. Even today, 97 years after its invention by Russian physicist Lev Sergeyevich Termen (Leon Theremin), modern hardware versions of the instrument are on sale in high-street music shops. 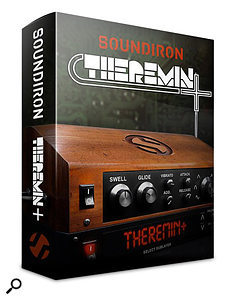 Soundiron’s Theremin+ certainly provides the classic Theremin sound, but it uses nothing more than a keyboard as a controller. In contrast, a hardware Theremin is played by moving one’s hand through the air in close proximity to a pair of antenna, one of which is assigned to the note’s pitch, and the other to its amplitude. Before trying Soundiron’s instrument, I was doubtful that the limitations of an incremental device like a keyboard could work as a substitute for something that is essentially a continuous controller, but it does serve surprisingly well.

When a new note is played, the tone begins to move from the previous key at a rate set by a Glide control on the virtual instrument, so this has to be positioned with consideration to achieve a satisfyingly smooth transition. Carefully adjusting the Attack and Release knobs is also important for the user to do, as these parameters greatly alter the urgency of the tone. Next to them on the interface is Vibrato, which is perfect for creating that classic 1950s B-movie spaceship effect; and then there is a Swell dial, which introduces what’s basically a very slow, sweeping vibrato. By default, the Theremin is based on a sine wave, but a more textured tone can be had by selecting other waveforms, such as triangle, square or sawtooth.

The remaining control options take the instrument off-piste a little. First of all there is the option of adding a sub-layer synth effect from a 20-tone menu and then adjusting its level and pitch relative to the main tone. Each of these sub-tones has its own key assignment in the lower octaves so that it can be quickly selected during a performance. And then there are 16 effects processors that can be freely assigned to a 10-slot effects rack.

As for its specification particulars, Theremin+ is based on just 106 24-bit PCM WAV samples (recorded in stereo at 48kHz and mono at 96kHz), and has a file footprint no larger than 975MB when installed. It’s actually quite refreshing to have an instrument that doesn’t use up multiple GB of disk space, and its retail price is very reasonable.

Playing Theremin+ certainly isn’t the same experience as performing with the real thing, but for recording purposes it should function as a convincing substitute. Alternatively, users could take their sounds in a new direction by applying the in-built effects and sub-tones and choosing alternative waveforms. The controls are nicely laid out and very simple, making it possible to play and tweak at the same time without any practice. I like it and look forward to using it on a track as soon as I can.