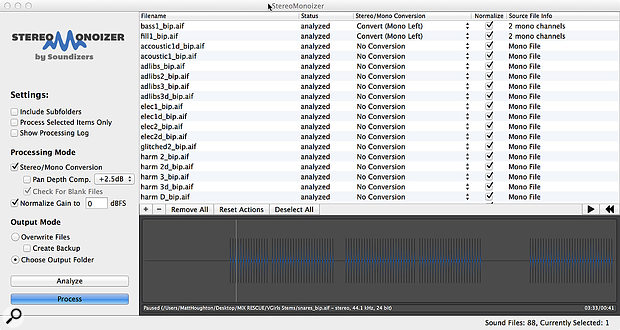 This useful piece of software can help you streamline your projects and preserve precious system resources.

How many times has someone sent you the multitracks for a project and you’ve found that every single file is in stereo — even the mono sounds? Usually it’s because the default bounce settings of a DAW are set to render things through the stereo bus, irrespective of the mono/stereo nature of the source track. But when sounds are mono this is incredibly wasteful in terms of storage, upload/download time when sharing projects via the web, computer processing power and hard-drive efficiency (you’re having to stream twice the data from disk that you should).

US company Soundizers have developed a natty little utility to address this issue. StereoMonoizer scans any audio files you drag and drop into a box on its interface and identifies those stereo files which contain only mono content (ie. where the left and the right channels contain identical information). It will also reveal any superfluous ‘blank’ files (which might result from careless rendering inside a DAW or recording channels with no input source), and detect split stereo files and allow you to interleave them. It can scan files located in subfolders too, which means you can drag an entire project’s folder structure straight into the application.

On the left of the GUI, you have a number of options to manipulate the files — the ability to convert stereo files to mono, to compensate for stereo pan law settings, and to normalise the files, for example. There seems to be no undo facility, but you are given the option to overwrite the original stereo versions of the files (in which case you get to create a backup if desired), or to write processed versions to a new folder of your choice, leaving the originals untouched.

On the right is a table, whose columns offer information about each audio file. Beneath this is displayed a waveform of the currently selected file and a play button, allowing you to audition any file before committing to processing. Speaking of which, there are two steps: analysis and processing. Dropping the audio file folder structure from a large mix (88 tracks) revealed two files that didn’t need to be stereo — it took about half a second to analyse each file on my 2013 MacBook Pro. Next to each of the files, the ‘Analyzed’ status was displayed, and the proposed stereo/mono conversion process — ‘No Conversion’ for most and ‘Convert Mono Left’ for the others, which presumably means extracting the left channel from the stereo file (there being no difference between left and right, it’s hard to prove this by listening to the result!). However, if you click on that field, you’re presented with other options, such as ‘Convert Mono Right’, ‘No Conversion’, and ‘Convert Split Stereo’. You can click on the column headers to sort the files by the source file format, proposed process and so on, which makes it easy to work your way through a large number of files systematically.

In fact, the only thing that threw me initially is that the default GUI needs to be stretched to reveal all the information that it contains. Making the GUI wider reveals two more columns, one which tells you the format of the source file (Mono File, Stereo File or Two Mono Channels), and another which allows you to tick/untick a box for each individual file that instructs StereoMonoizer to normalise the files.

This is an extremely well thought-out piece of software. While it’s always going to be possible to suggest potential additions to the functionality of an application such as this, it not only does what it set out to do but does more than I’d anticipated. It’s incredibly easy to use, too. It may not be the sexiest thing you’ll add to your studio, but at $49 for a single license, or $79 for a two-installation license, if time is money or your computer resources are under pressure it’s well worth the price of entry. I tested the Mac version, but as we were going to press a Windows 64-bit version was made available. Matt Houghton