With The Hammersmith, a conventionally played acoustic grand piano, Soniccouture have released one of their most mainstream and potentially important libraries yet.

The source piano is intriguing, a Steinway D with a motorised, MIDI–driven action that Soniccouture say assisted greatly with the consistency of the sampling. Twenty one velocity layers were captured, with sustain pedal both up and down, using an abundance of expensive mics from close, mid and room perspectives. The location was the nice–sounding British Grove studios in Hammersmith.

In Kontakt (or the free Kontakt Player), those multiple mic feeds are represented by a three–channel mixer with switchable mic arrays. Each channel also has mute, solo and phase buttons, a fold–out channel strip with four–band EQ, and (rather unconventionally) synth–style attack and decay parameters. They can optionally drive separate outputs too, allowing for complex DAW mixing setups.

An Options panel exposes parameters for key, pedal and room noise, round–robin sample switching, and one of the most flexible velocity mapping schemes you’ll come across. There’s good support for temperament and microtuning too, with preset saving and loading, and adjustment available on a note–by–note basis. 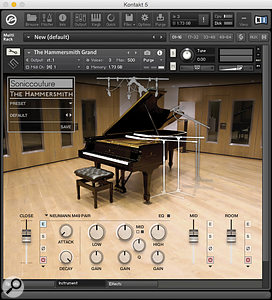 A useful range of effects is built in: stereo width, a compressor, velocity-controlled HPF and LPF filters, a convolution reverb (with naturalistic as well as whacky impulse responses), and a master EQ.

All these features raise The Hammersmith up alongside the Synthogys and Garritans of the virtual piano world in terms of flexibility, but it’s the sound quality and playing experience that may be more telling. Personally, I found it thrilling, immersive and addictive. This Steinway has clearly got plenty of miles on the clock, and there’s something of a warts–and–all quality to the sampling that lends authority, believability and lots of vibe. Not all the mic perspectives immediately sound beautiful (especially the AKG D19 shoved in a soundhole), and that’s the joy of it. There’s everything here from opulence and intimacy to otherwordly and even ragged tones, all egged on enthusiastically by the EQ and effects. The resonant pedal–down sound is fantastic, and depressing the pedal with notes already sounding does what you’d hope. The sense of scale and harmonic complexity increases thanks to a flawless behind–the–scenes crossfade. Nice programming.

Drawbacks? A bass F has its unisons tuned a smidgeon too far apart for my liking, and I noticed that presets utilising the room-noise feature don’t load with it sounding. You have to play a note first to trigger it. But this is piffling stuff. The Hammersmith is an absolutely top-class virtual piano. For rock, pop and jazz it seems endlessly inspiring. It would not be my first choice for classical styles, but that’s not to say it couldn’t be used successfully in that context. It’s available at two prices: the 19GB £99 Standard Edition with two mic perspectives and no mic model switching, or the 52GB £199 Professional Edition described here. Robin Bigwood