Boasting 16 channels, a transparent sound and bags of headroom, there's more to this innocent-looking creature than meets the eye.

The Californian company Speck Electronics have been making professional audio equipment for more than 30 years, since Vince Poulos founded the company back in 1973. He has been designing innovative and interesting modular mixers and signal-processing units ever since, and the subject of this review is the X Sum, which is a 1U rackmounting line-level mixer or — in more fashionable terms — a summing amp or summing mixer.

The X Sum can accommodate up to 32 inputs in 16 stereo pairs, and provides two stereo outputs plus stereo headphone monitoring. Multiple X Sum units can be daisy-chained, should you need to combine more channels. Applications for this line mixer include the obvious external analogue summing of multiple DAW outputs, but it can also be used as a high-quality line mixer for outboard effects or synths, or even as part of a modular portable mixing system, in combination with stand-alone mic preamps and signal-processing modules, such as Speck's own Mic Pre 5.0 microphone preamp and ASC 4-band equaliser.

All audio inputs and outputs are electronically balanced, with masses of headroom, and most are presented on TRS connectors on the rear panel. The exception is the output from the Mix-B mix buss, which is provided on an RJ45-style connector that's also used for chaining multiple units. Various passive breakout boxes are available to access this interface, the simplest providing just two TRS sockets to access the Mix-B outputs (XSUM-BB-01). A larger unit (XSUM-BB-03) carries four sockets: two for the Mix-B outputs, and two more for a pre-master-fader send of the Mix-A outputs. Although not provided on these boxes, the interface itself can also accept a direct, fixed-level stereo input to the main mix buss, which is to enable the daisy-chaining of another X Sum. To that end, pre-made link cables are available to daisy-chain two, three or four units to cater for up to an astonishing 128 inputs.

The X Sum boasts an impressive set of specifications. The bandwidth extends between 3Hz and 54kHz (±0.5dB, measured with 12dB of gain), and the THD+n figure is 0.0024 percent, even with +24dBu output levels. The residual output noise is -102dBu, rising to -87dBu with all inputs routed. The maximum input and output levels are +28dBu, maintaining a healthy headroom even for the most powerful digital converters! Input impedance is a flexible 30KΩ (balanced), and output impedance is a low 60Ω.

The front panel is a long row of 16 stereo input channel controls, each equipped with two buttons, a dual-concentric rotary control and two LEDs. The upper part of the rotary control sets the input level, while the lower outer ring adjusts the panning/balance. Sadly, there is no centre detent, but there is a spot mark on the panel legending to show the centre position, and the unity gain point is marked for the level control. The input sockets are cross linked, so that plugging into the left input only provides a dual mono source for the mixer.

The upper (grey) push button determines to which mix buss the signal is routed (Mix-A or Mix-B — one or the other, but not both), and the adjacent LED lights red when the signal is routed to the main Mix-A buss (and is extinguished when routed to Mix-B). The lower (black) push button combines the two input channels to mono and lights the adjacent yellow LED. The pan control remains active after the mono-ing, so you can still pan the signal around.

These push buttons are of the type that make it quite hard to see whether they have been pressed in or not but, fortunately, the LEDs make the status of each channel very obvious. There is no input metering of any kind, but with the ability to handle signals up to +28dBu, none is really needed.

The output section is provided with ganged master level control for the Mix-A buss, and another black push button (and associated yellow LED), which combines the Mix-A outputs to mono. The Mix-B outputs are only available on the multi-I/O RJ45 connector, and these are normally provided as a fixed-level signal directly from the mix amp.

The monitoring section is a simple headphone output, with its own volume control and a push button to select the Mix-A or Mix-B busses. The monitoring point is taken before the Mix-A output fader. The push button is set further into the panel than the rest of the buttons, so that it is flush with the panel when pushed in. Presumably this is to avoid accidental operation when plugging in headphones, since it is squeezed in between the volume control and socket, making it very difficult to reach when headphones are plugged in.

A sea of TRS sockets: there are 32 separate inputs, providing 16 mono/stereo channels, and with the ability to link four units together you could have a 128-channel mixer in 4U of rack space!

It seems odd, initially, but the monitoring source selector also affects the Mix-B output signal. The output from the Mix-B mix amp is routed via part of this selector switch. When monitoring Mix-A, the Mix-B signal is sent directly to the Multi-I/O RJ45 socket. However, when the button is pressed to monitor the Mix-B signals, the RJ45 connector feed changes to be 'post' the headphone volume control. This provides a master level control for the Mix-B buss, to match that of the Mix-A buss. It is a useful (but not at all obvious!) facility that is shown on the block diagram and is mentioned in the manual, but there are no panel markings to make this unusual mode obvious.

There are now lots of summing boxes on the market, and their wide range of facilities and features provides a high degree of differentiation. Consequently, a selection will probably be made on the basis of those features and facilities, rather than on price alone. For example, some units make a virtue of valve amplification or transformer coupling. Some include dynamic control or A-D converters. Some offer elaborate options such as external fader banks or artist cue feeds. The Dangerous 2-Bus LT is similarly priced to the X Sum, and also caters for 16 stereo inputs. However, it provides only one stereo output buss and has no level or panning controls. Another product at a similar price is the Audient Sumo, but while this provides only eight stereo inputs it also offers a more flexible monitoring section and a stereo buss compressor/limiter, and has provision for an optional A-D stage.

The rear panel is a sea of TRS sockets. The two rows of 17 sockets provide 16 stereo inputs and the stereo Mix-A output. Tucked away in the corner is a mini-DIN style of multi-pin power connector to accept supplies from the external in-line power supply, and the RJ45 multi-I/O socket already described. The power supply is a compact metal-cased 'brick' measuring 117 x 70 x 185mm, and is equipped with an IEC mains inlet and integral fuse, voltage selector and on-off switch. The output is provided on a two-metre flying lead. 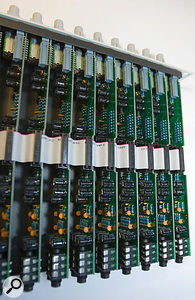 A look inside the Speck X Sum reveals a modular construction, rather like that found in traditional mixing consoles, rather than the single printed circuit board you might expect in a 1U module such as this.The internal construction came as something of a surprise to me. I was expecting a single large circuit board across the base of the unit. Instead, I discovered 18 separate PCBs, mounted vertically and running from the front to the back in neat parallel rows — much like a conventional mixer. Each input card carries the input sockets at the back and the panel controls at the front, with a ribbon-cable mix buss running from card to card across the middle. The rightmost cards provide the Mix-A and Mix-B mix buss amps, along with the mains and monitoring outputs and multi-I/O functionality.

Conventional sized, very high-quality components are used throughout, and the construction appears to be to a very high standard indeed.

My overriding impression of the X Sum is that it is a very clean and transparent-sounding mixer. A lot of summing amps seem deliberately engineered to provide a slightly warm, 'fat analogue' kind of quality. The X Sum doesn't do that — it just gets on with the job of mixing a lot of signals together, and with a fair degree of flexibility if required, in terms of adjustable levels and panning/balance.

If you want to introduce some colour to your analogue mixes, you can still do that by using the larger of the two available breakout boxes to access the pre-fade Mix-A output. This is direct from the summing amp and bypasses the line drivers, so by feeding this signal into your favourite 'coloured' line-input preamp — for example, one with transformers or valves — you have the best of both worlds: a very clean, distortion-free mix, with loads of headroom, and the sonic colour of your choice!

But don't go away with the idea that there is anything naff about the X Sum's line drivers. Actually, they are very clean and powerful devices that stand comparison with anything else you care to mention. This is a very professional and capable unit indeed.

Operationally, the lack of centre detents on the panning controls is a little frustrating, and the monitoring Mix-B button is fiddly, but neither of these foibles cause any real problems. The bottom line is that the X Sum does exactly what it says on the box. It can combine a lot of input signals, provides adjustable gain and panning if required, and has the flexibility of two separate mix busses and simple monitoring. The sound quality is excellent — very clean, very quiet, and very powerful — and it's hard to fault the unit on those terms.

The Speck X Sum is a high-quality, transparent-sounding and powerful summing amplifier that offers plenty of headroom and can be daisy-chained with other units to provide up to 128 channels.