The British are back! Spitfire Audio's orchestral percussion library flies the flag for the UK.

All of Spitfire Percussion's functions are controlled via this simple Kontakt‑based interface.

Despite overwhelming evidence to the contrary, the British like to think that they are the best at everything. Although it has the advantage of giving other nations a good laugh, this attitude is clearly in need of a re‑think, but there are still one or two areas where it holds true: a shining example is symphony orchestras, of which the UK boasts several world‑class examples (the LSO, BBC Symphony Orchestra, Philharmonia Orchestra, and more). Whether performing live or recording film soundtracks, classical CD releases or overdubs on a pop album, the superb musicianship and great sound of our musicians still validates the old cliché that British is best.

When it comes to recording their orchestral sample libraries, Spitfire Audio are definitely backing Britain. Set up by Paul Thomson and Christian Henson in 2008, the company's initial aim was to provide themselves and their colleagues with high‑quality orchestral samples that meet the needs of today's media composers, while at the same time showcasing UK musical talent. To that end, Spitfire hired the cream of British orchestral session players in the form of the excellent English Session Orchestra, whose members' playing has graced many major feature films (Bond, Potter, Hannibal, Lord Of The Rings...) and albums by the likes of Leona Lewis, Paul Weller and Courtney Pine.

Spitfire distinguish themselves from the pack by not selling most of their samples to the general public. Instead, a limited number of licenses are granted to composer‑investors willing to buy a stake in a project in exchange for free access to the library and its ongoing upgrades. Using this unorthodox approach, Thomson and Henson licensed their Air Project Chamber Strings/Symphonic Strings and the patriotically‑named Great British Brass and British Wood libraries to a clientele of leading UK film composers, including such luminaries as David Arnold, Anne Dudley, Harry Gregson‑Williams and Richard Wells. (Overseas investors are also eligible, should the Sultan Of Brunei happen to be reading this.)

Percussion For The Masses 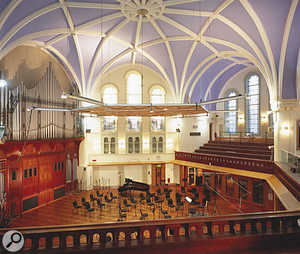 Having made strings, brass and woodwind available on a by‑invitation basis, Thomson and Henson adopted a more conventional commercial approach with their orchestral percussion library. Recorded (like the other Spitfire projects) in Air Studio's Lyndhurst Hall, Spitfire Percussion marks the launch of the company's commercial range and is now on sale to the public as a 25GB download in Kontakt 4 and Kontakt Player 4 format. The samples are performed by the talented percussionist Joby Burgess, founder of experimental outfit Powerplant and a member of the fabulously entertaining Ensemble Bash contemporary‑classical‑afro‑jazz percussion quartet.

The percussion instruments were recorded from three mic positions, 'close', 'ambient' and 'tree'. The last, a trio of omnidirectional mics set up in the classic Decca Tree formation above the conductor's head, picks up a detailed front‑of‑stage sound, while the true Lyndhurst Hall ambience is captured by a pair of widely‑spaced ambient mics placed high up in the gallery. You can create 5.1 surround mixes by routing the three mikings into different outputs — and the PDF manual contains some handy suggestions on how to create a low‑frequency mono mix for the 'point one' LFE channel.

All samples are at 48kHz (the sample rate favoured by the TV and film world) and 24‑bit. Downloading them is managed by Spitfire's 'Downloader App' program (which is smart enough to resume downloading even after you've turned off your computer in mid‑stream) and authorisation is done at Native Instruments' web site. Though sharing Spitfire's samples with others is (as you'd expect) forbidden, the installation license allows distribution amongst machines or rigs that you own. 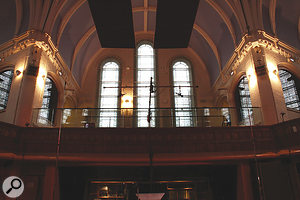 If you were scoring a cinematic sequence on the scale of Gladiator's opening battle scene, you'd be glad to have Spitfire's timpani at your disposal. Their big, commanding sound matches Russell Crowe's larger‑than‑life screen presence, and, by comparison, makes some other sampled timpani seem like the musical equivalent of Kenneth Williams. I was immediately struck by the timps' amazing reverb, which turned out to be the natural hall sound built into the ambient samples; instruments load with their three microphone positions in place, so if you want a drier, more close‑up effect you can turn down (or switch off) the 'tree' and 'ambient' mics and use only the close miking. However, I imagine most users will be so bowled over by this superior, wide‑screen reverb that they'll stick with the more distant mics most of the time.

Recorded at seven dynamic levels, the timps' single hits maintain a clean, transparent tone across a huge dynamic range, starting with softly threatening, completely noise‑free pp strokes and culminating in ff hits of tremendous force. You can use the mod wheel to switch between played crescendo rolls of different lengths; alternatively, you can create your own custom crescendi by using mod‑wheel‑controlled crossfades between four dynamics of straight roll. The same technique is used on the library's orchestral bass drum, creating some thunderous swells. These intensely powerful samples are perfectly complemented by crisp, muscular snare drums, explosive piatti crashes and some scary tam tam strikes which, if you crank up the volume, will dislodge chunks of plaster from your ceiling.

These orchestral staples are augmented by a generous selection of suspended cymbals that feature some nice, eerie bowed effects, and strong rock‑style toms (mapped rather idiosyncratically, with the largest tom placed highest on the keyboard). The tom hits are greatly enhanced by the hall ambience, but when it came to smaller drums such as congas, bongos and rototoms, I found the close miking to be more effective in bringing out the subtle detail of their rolls, flams and quiet hits. 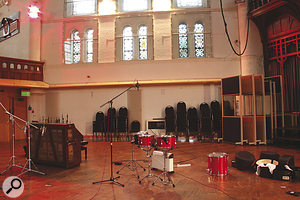 Though not quite ready to lay down my life in support of a magazine review, I have to say that Spitfire Percussion's marimba is to die for. The combination of opulent hall acoustic, a fine, mellow instrument, medium‑soft beaters and the sensitive touch of the player has produced a beautiful, sweet and musically incisive patch. The only down side is that we're now going to be hearing the bloody thing on dozens of TV ads. The xylophone is no slouch either, sounding suitably bright and perky without getting too brittle.

Other tuned perc highlights include a very pretty celeste and a set of tubular bells with a lovely, mournful, soft chime reminiscent of distant church bells. Though similarly easy on the ear, the vibraphone suffers a little from unhelpful programming: to play it in a pianistic style you first have to edit the release time so notes don't ring on forever — though of course you can then save the edited patch for future use, so it's not too much of a hardship. Another minor omission is that the vibes currently lack their characteristic tremolo effect (almost impossible to replicate accurately with samples, because of the difficulty of sync'ing the tremolo from note to note). Spitfire say they're working on a script‑based tremolo effect that will be available in a free upgrade.

The instrumentation doesn't venture far into ethnic territory, but familiar world music items such as gangokui (African tuned cowbells) and a Chinese wind gong are included. The latter has some very cool bowed samples that you could use in tandem with the tam tam's 'superball' rubbed resonances to create CSI‑style spooky soundscapes. In addition, a collection of industrial 'trash metal' instruments sound beautifully resonant and surprisingly tuneful in the big hall. All in all, the instrumentation contains a wealth of choice, but I was surprised to discover there are no triangles. Apparently they've been recorded and will be made available in a future update.

It almost goes without saying that a sample library designed by a pair of busy film and TV composers should be effective and easy to use, and that's certainly the case with Spitfire Percussion. The instruments are highly playable straight out of the box, and the provision of up to eight round-robin variants throughout ensures that repeated notes and programmed rolls will sound natural. I also appreciated not having to wade through several beater types to find the one I wanted — because the producers and player have done the job for us by selecting the most universally useful ones. Having said that, the option of mallet toms and one or two variations of marimba mallet hardness would have been nice; as Spitfire regularly deliver upgrades and appear to be open to requests from their users, one hopes that such options will be considered in future.

Playing these samples was a pleasure. The sound quality is inspirational, and the assured performances and sensible musical choices guarantee a smooth ride. It's fair to say that the library doesn't cover every performance variation under the sun (for example, there are no wood-block rolls or bowed vibraphone samples) and it doesn't include electronic soundscape material — all effects are purely musical and acoustic. But for those of you who like to program your own percussion parts, Spitfire Percussion is a treasure trove of great‑sounding instruments that will add quality, realism and a touch of class to your arrangements.

If you'll pardon the pun, quite a few companies have had a bash at producing a comprehensive, single‑hit‑based, orchestral percussion sample library. Miroslav Vitous and Peter Siedlaczek led the charge back in the '90s by issuing Percussion and Harp titles in the then‑dominant Akai format (which restricted CD‑ROM size to 512MB). In 2002, Big Fish Audio's 2.8GB London Percussion claimed SOS's coveted 'most mendacious title' award when it was revealed it was actually recorded in the USA. A few years later Sonic Implants (now Sonivox) impressed with their 19.6GB Symphonic Percussion Collection, and Vienna Instruments' Percussion library out‑muscled the competition by offering a staggering 84GB of samples and a huge instrument list. More recent contenders include Vir2's deeply‑sampled Elite Orchestral Percussion (19.5GB). The closest alternative to Spitfire Percussion is Project SAM True Strike (2005): 18GB of orchestral percussion recorded in a concert hall from three mic positions.

Minimum specs are a Pentium or Athlon 1.4GHz processor for PC and 2.4GHz Intel Core 2 Duo for Mac. Recommended specs are a PC with an i5, i7 Quad or eight‑core processor or a Mac with an Intel Quad or eight‑core processor. Spitfire recommend 8GB (or more) of RAM, but the library will run on as little as 1GB providing you don't load too many instruments. The makers strongly advise using a fast (minimum 7200rpm) eSata, USB2, Firewire or solid-state drive to house the samples; they also suggest that users with faster systems should try reducing Kontakt's 'preload' buffer setting from its default of 60kb down to 32kb or even 12kb, which they claim can dramatically reduce the amount of RAM needed to load the full library.

Spitfire Percussion is geared towards those who like to create their own parts using single hits, and thus contains no loops or phrases. Though the price might challenge the pocket of the entry‑level user, experienced samplists on the lookout for a first‑class orchestral percussion library need look no further: this excellent collection has a good range of instruments, beautifully and cleanly recorded from multiple mic positions, expertly played and deeply sampled in a fabulous acoustic. Recommended.