Creating complex routing chains in a hybrid DAW/outboard setup presents its own set of problems — to which Solid State Logic offer this solution...

Now that most of us have moved into the domain of the DAW, integrating analogue outboard has become something of a problem. Yes, if you have a large enough interface you can patch favourite outboard between spare interface outputs and inputs, and then use the DAW's internal routing to assign the outboard to specific channels or buses, but this only really works for single processes. If you have a lot of outboard and want to create more complex signal-processing chains — preamp into equaliser into compressor, for example — something with a little more flexibility and independence from the DAW's routing facilities might be desirable. Enter the SSL X‑Patch...

Extending Solid State Logic's 'X' range of products (the others being the X‑Rack and X‑Desk), the X‑Patch is based on the same technology employed at the heart of the Matrix console. In this stand‑alone, 1U, rackmounting form, the X‑Patch provides a 16x16 SuperAnalogue routing matrix that can be controlled remotely via Ethernet. A bespoke browser application, called 'Logictivity Remote Studio' provides setup, configuration and 128‑preset storage/recall functionality.

The X‑Patch can be used as a simple, zero‑latency, analogue signal router, or in a more complex and convoluted 're‑entrant' manner to create chains of preamps and other analogue processors, which can then be inserted into DAW signal paths. Commonly used outboard chains can be stored as preset configurations to make their future construction trivially simple and instant. For really big systems, up to six X‑Patch units can be controlled together from a single X‑Patch 'Logictivity' browser application, via a standard Ethernet hub.

Interestingly, the X‑Patch has also been designed to serve as a live performance tool for guitarists. Once configured, the X‑Patch can be used completely independently of the Logictivity browser application, with configurations being switched via MIDI. So by hooking up a standard MIDI foot controller, you can use the X‑Patch as a stand-alone analogue routing and switching system, allowing easy re-patching of on‑stage effect-pedal processing and/or amplifier selection — and SSL claim that this solution works out to a fraction of the cost of comparable professional on-stage effects-selection systems.

D‑sub connectors provide a compact way of sending 16 signals in and out of the X-Patch.

The X‑Patch comes in the form of a smart, 1U, rackmounting box, finished in the usual SSL silver and extending about 230mm behind the rack ears. The front panel has no controls — not even an indicator to identify the current routing preset. There's an illuminated power‑standby 'lozenge' switch and four sockets, the first pair of which are 'combi' XLRs for inputs one and two, while the second pair are male XLRs for outputs one and two. All four XLR connections are parallel duplicates of the rear-panel connections (you can use front or rear XLRs for each channel, but not both), while the unbalanced quarter‑inch input sockets provide high-impedance (1MΩ) DI inputs to accept guitar signals. Plugging into these jack sockets overrides the rear-panel XLRs completely. The X‑Patch is intended for balanced line-level signals only: it won't pass phantom power, and it isn't intended to handle mic‑level signals.

The rear panel is a little busier, hosting four 25‑way D‑Sub connectors, each wired in the usual Tascam format to provide eight balanced signals — a total of 16 inputs and 16 outputs. The unit is configurable for +4dBu and ‑10dBV operating levels. There's also a pair of MIDI sockets (In and Thru) and an RJ45 Ethernet port. Another standard five‑pin DIN socket accepts DC power from an external line‑lump universal PSU. I don't know whether it's possible to blow up the unit by plugging the power cable into a MIDI socket — the handbook does contain a warning about it — but it seems short‑sighted to have designed a unit with that connection possibility when there are so many alternative connectors available! Also included in the box is a standard IEC mains cable, the external universal power-supply unit (100‑240V AC), an installation guide and the software CD.

Software installation is trivially simple on both Mac and PC, but Java 5 or higher is needed for the Mac (it's already included in OS 10.4 and higher). The current software version while reviewing was V1.04 and the X‑Patch firmware was V1.01.

Once the software has been installed and the X‑Patch hooked up to the computer's network, the first time the software is run you have to go through a process of finding the X‑Patch. This is as simple as clicking a 'Find' button, at which point the software interrogates the network to find connected X‑Patch units. X‑Patches are identified by their serial numbers, but a Setup menu allows them to be named uniquely, which is useful. The same menu also allows the IP address of each unit to be set manually, instead of by DHCP. The same menu page also enables activation of the MIDI port and setting of its receive channel, and the operating level can be configured independently between +4dBu and ‑10dBV for each channel in and out.

On this 'Channels' page, each I/O port can also be named (up to 12 characters) and the routing 'rules' established. There are three options: Unlinked, Device and Insert. In the Unlinked mode, the signal source channels and corresponding destination channels are not related to each other, so they are treated as entirely independent connections. In the Device mode, the source and destination channels are deemed to be the input and output of a specific device, so they're routed together when constructing chains, or when they're sent to an insert. The Insert mode is used to inform the system that the connections are from a console's insert send and return. In this case, if a device is routed to the insert return, the device's input is connected to the corresponding insert send. The idea of these three modes is simply to speed up routing operations in an intelligent way. 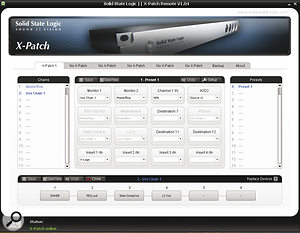 The X‑Patch Remote software makes it easy to change the analogue signal routing without having to manually re-patch.

After the initial configuration, the main control page makes more sense, with 16 windows in the centre, each allocated to one of the X‑Patch's 16 destinations. Arranged in columns on either side are lists of any pre‑constructed processing chains and preset configurations, while across the bottom of the window, six linked boxes are used to construct the signal-processing chains. Building 'Chains' is as simple as selecting the required sources from the drop-down lists in each on‑screen box, and clicking on the appropriate 'Save' button when complete. The system can store up to 128 Chains. They can start with any X‑Patch input source or device, but the subsequent boxes must be filled with devices, and the chain can be of any length up to six devices. Once created, Chains can be renamed to aid future identification.

Each destination in the matrix patch can be loaded with either an input source or a pre‑defined chain. Only the available sources are listed in each drop-down box — so if you're using a chain that employs several devices to feed one destination, those devices won't be listed as available for other destinations. The X‑Patch won't allow the same source to feed multiple destinations either, which I found a little restrictive.

Once a routing configuration has been established, it can be saved as a Preset (again, there are 128 available Preset memories). Saved Preset configurations can be renamed to aid identification as well, of course, and the system always restarts with the matrix configuration it was in when powered off.

Once you have your head around the routing concept, and the differences between devices, inserts and unlinked sources and destinations, the whole thing is very easy and logical to use — although you'd need your wits about you if you started interlinking multiple X‑Patches!

The sound quality of the X‑Patch was beyond reproach — I could not hear any signal degradation passing through the X‑Patch, regardless of the established route. Even when I ran a signal in and out multiple times, it proved extremely clean and uncoloured. The browser interface is very logical and simple to use, and the ability to construct and save chains and routing presets makes daily operation extremely simple. However, the key to effective operation is to invest time and effort in working out how to physically connect your outboard devices and your audio interface to the X‑patch in the most effective and versatile way — and then to work out how to patch everything and program the I/O modes appropriately.

While digital audio routers are relatively common (I've been using a Z‑Sys digital router for years), most analogue studios still rely on traditional patchbays for their analogue routing flexibility. Although there are plenty of professional analogue routers around, most are large (64x64 and 128x128 being very common) and are mostly intended for the broadcast market. The X‑patch is designed to appear a little more friendly to use for the typical project studio engineer/producer, and is of a more appropriate size, yet remains scalable if required.

I found the X‑Patch easy to configure and use, and it performed flawlessly. For anyone wanting to control the signal paths around a limited amount of outboard equipment, and to interface it neatly with a DAW — without the reliability concerns of a physical patchbay and with the added convenience of instant setting recall — the X‑Patch has a lot going for it. Equally useful in a complex guitar rig, a DAW‑based project studio with a collection of esoteric outboard, or a small mastering company wanting to be able to switch quickly between different analogue processing chains, the X‑Patch is ideal.

Analogue routers are available in a variety of sizes, but most are large and expensive broadcast‑oriented designs from the likes of Evertz, Pro‑Bel, VinkinX, Nevion and Isis, amongst others, designed to operate alongside video routers.

Stored presets can be recalled using MIDI Program Change messages, and multiple X‑Patches can be controlled synchronously by daisy‑chaining the MIDI control via the Thru and In sockets. A MIDI Program Change 0 message does nothing, but Program Changes from 1‑128 call up the corresponding preset number. In this way, a simple MIDI foot controller can be used to recall up to 128 different routing configurations, and by hooking up different effects pedals or processors, input sources and amplifiers to the X‑Patch, you can establish a very complex but immensely flexible guitar effects system, with almost unlimited signal-flow possibilities.

The MIDI-control options can also be used by sending the appropriate MIDI Program Change messages from a DAW to recall specific routing configurations that suit specific DAW projects and working modes too, of course.

This is an elegant and expandable 16x16 routing matrix with intelligent patching control, and the ability to store preset configurations as well as pre‑defined processing chains. It does what it says on the tin — and does it well.