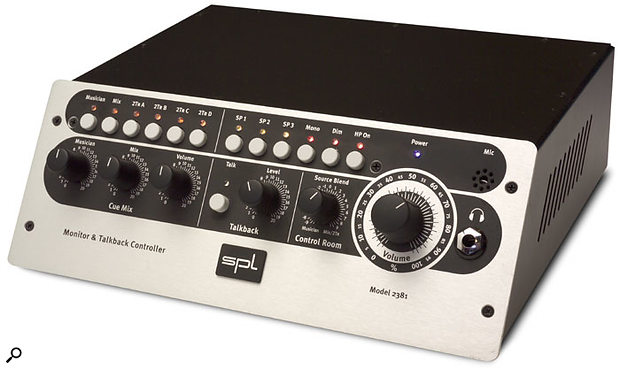 Following on from their Model 2380 surround monitoring controller, SPL have now designed a stereo version with built-in talkback facilities.

SPL's new stereo monitor controller can be thought of as a stereo version of the Model 2380 surround unit SPL launched a couple of years back and, being a simpler device, it's also rather more affordable, if still not exactly cheap. As with competing monitor controllers, the idea is to give DAW users the same type of monitor-control and source-switching features you'd get on a large mixing console, and most such devices also include talkback. The Model 2381 does all this, but also includes a 'musician' input allowing the performer to monitor the source being recorded directly from the output of a preamplifier, rather than from the computer's output, so that there's no latency while overdubbing. Of course this means muting the musician's track output in the DAW by some means or switching off software monitoring, otherwise you hear both the direct and delayed signal.

The Model 2381 is housed in a Teutonically stark but very functional metal case with a sloping front panel, chunky rubbery knobs, and large, positive-action switches. All the audio connections are on the rear panel, as is the IEC mains inlet. Taking the rear panel first, there are inputs for the musician's direct source on two balanced, quarter-inch jacks, though if the source is mono, as is often the case, connecting the left input only will position the sound centrally in the monitor mix. Two further balanced jacks accept the stereo output from the DAW's audio interface, after which there are inputs for four two-track playback sources, two on jacks and two on RCA phonos. The two unbalanced RCA inputs have 10dB of fixed gain to bring consumer levels more into line with professional equipment feeding the balanced inputs. Note that none of these two-track inputs have separate level adjustment.

As usual, talkback is handled by a small electret mic set into the front panel, but where manual operation isn't appropriate, there's a rear-panel footswitch jack for remote operation using any momentary-action switch or pedal. A cheap keyboard sustain pedal is ideal. The talkback signal normally goes to the live-room monitors via the stereo Cue Mix output, but there's also a direct talkback output jack for alternative setups, such as where the talkback is to be routed through a small active monitor speaker rather than headphones. This is particularly useful when recording acoustic ensembles where the performers may not wish or need to wear headphones.

A Slave output, again on a pair of balanced jacks, provides a summed stereo output of all the active two-track inputs except for the musician's input. As well as providing a useful recording source, it may also be used to run outboard metering if required. Three sets of line-level, balanced speaker outputs are provided on standard XLRs for feeding active monitors or power amplifiers. Again there's no level adjustment trimmer, so you need to balance up the monitors using their own controls to avoid level discrepancies when switching between them. SPL's reason for omitting gain controls is that they have tried to keep the signal path as simple as possible and passive wherever they can, so as to maintain the highest signal integrity.

The front panel (see earlier) is the very model of clarity, with all the latching source and speaker buttons arranged along the top, each with its own status LED. Further buttons handle Mono, Dim (20dB attenuation) and HP Off, only the last of which needs any real explanation. This simply switches the headphone output on and off, which is a nice touch, as headphones receiving signal that are sitting on the desk beside you can make a lot of unwelcome noise. The Talkback button is non-latching and is situated next to the Talkback Level control where it is clearly visible and impossible to confuse with the other buttons.

Three rotary controls look after the cue mix by combining the desired levels of Musician and Mix, and there's also an overall Volume control. This mix feeds the Cue outputs that normally drive the live-room headphone system. A large, calibrated knob adjusts the control-room monitor level. A final rotary control provides a blend between the Control Room and Source signals so that you can balance the musician's feed with the main mix feed or one of the two-track machines.

Everything about the Model 2381 is just as straightforward as it appears to be, and the sound quality is truly excellent. The user interface may be a bit 'broadcasty' and boring, but it's very clear to navigate and all the sources may be mixed without limitation if there's a need. While you wouldn't use the talkback mic to record a lead vocal, it is loud and clear, which is all you can wish for, and there's no noticeable noise when any of the switches are operated.

The only operational drawback of this unit is the lack of level trims on the inputs and outputs, but that was a conscious design-philosophy decision by SPL to maintain the best possible signal path, and I've certainly got no argument with that side of things. Including a musician input to facilitate zero-latency monitoring is a nice idea, and there's nothing obvious missing other than Technical Editor Hugh Robjohns' favourite BBC feature allowing the outputs to be summed to mono with one channel phase-reversed — admittedly handy for checking the stereo component of a signal.

Again SPL uphold their reputation for quality, both mechanically and sonically, even though this stereo unit is likely to find its way into more project studios than professional studios due its lack of surround capability. It's not the prettiest box on the market, or the cheapest, but ergonomically it can't be faulted, and to date it's the cleanest-sounding monitor controller I've tried. For those users setting up mixerless DAW systems where quality is paramount, I'd have no hesitation in recommending the Model 2381. If you've previously tried to manage without a monitor controller, especially if you use active monitors, you'll be amazed how much more usable your system is with this unit as your central control panel.