The Level Or is a modern take on the Shure Level Loc, which was a small — and rather trashy — PA limiter designed in the '50s. While that processor might not have proven to be the perfect partner for PA applications, it has certainly found favour amongst many audio engineers, in particular as a parallel drum crusher. The Level Or, which has a transformer-balanced input and an electronically balanced output (you really don't want to add any more flavour at that stage!), is capable of being used in almost exactly the same way as the original Level Loc, and there's still JFET limiting at the heart of the design. However, there are a few notable differences, which extend the tonal palette offered by this circuit, and improve ease of use. 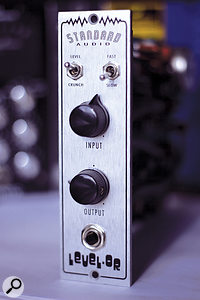 Most obvious at first glance is the addition of an output level control, with which you can ensure that you don't clip the input stage of the next device in the signal chain, no matter how hard you drive the Level Or. While a 'Level' setting on the first of two toggle switches puts the device in traditional Level Loc mode, flipping this makes everything sound that bit more dirty and aggressive. Finally, the option of a longer release time has been added via a second toggle switch. The control set is pretty minimal, then, albeit marginally less minimal than that of the Level Loc: there are those two metal toggle switches (Level and Crunch, and Fast and Slow), an input potentiometer and another for the output level. Other than a quarter-inch jack input socket, that's all you get. It should come as no surprise, then, that this is something of a one-trick (or being generous, one-and-a-half trick) pony. But what a wonderful trick it is...

Sending a drum loop from my DAW through the Level Or sounded horrific. Blend that horrific signal in so that it's played in parallel with the dry one, though, and something brilliant begins to happen. That dirty, trashy, crushing, squelching distortion provides attitude by the bucket-load, and with the right balance of dry and effected signals it's attitude that becomes very usable. I found it particularly useful on rock, blues and certain pop-styles, for both full kits and, in particular, snares.

The various settings aren't dissimilar: I found myself using Crunch more often than not, but these controls seemed to me to be more about which setting was suitable for which material, rather than offering any great variation on any given source.

My tentative exploration of this process on electronic material proved rather less fruitful, probably because it wasn't coping so well with the very low bass frequencies present in the material I was using. I'm sure that it could do nice things in more acoustic hip-hop-oriented stuff too, where that trashy aesthetic is desired, and it might also find a role in sound-design applications.

If I didn't know the background and someone told me this thing had been designed specifically for drum processing, I'd believe them. If they told me it had been designed for PA applications I'd have sent them back to the asylum! Is it worth the asking price? That's a hard one to answer. If you do drum production on a more than occasional basis, then yes, I believe it is, particularly if you're working commercially or in genres where distortion is pretty much demanded. For the more financially challenged, Sound Toys do a fine take on this effect in plug-in format (the Devil Loc), but the Level Or is the only game in town if you want hardware, other than an ageing original Level Loc, of course, which would be a poor relation to this.