The latest mic from the Telefunken stable has no fewer than four different voicing options. Is this the last kick-drum mic you'll ever need?

Telefunken's range of mics includes premium valve and solid-state capacitors (both small- and large-diaphragm types), as well as a selection of moving-coil dynamic models, of which the latest is the cardioid M82. Employing a capsule derived from that of the company's earlier M80 handheld vocal mic, Telefunken say the M82 is suitable for a multitude of sources, including bass amps, organs and brass instruments. It is, however, specifically recommended for kick drums and 'broadcast' (spoken) vocals.

This is not an unusual combination for a dynamic cardioid microphone. ElectroVoice's RE20 is the archetype here and is considered a classic in both roles — you're as likely to see one suspended over a radio mixer as you are to find one mounted inside a kick drum. Moving-coil mics have an inherent tolerance of high SPLs, which is an absolute necessity for a kick-drum mic, while the proximity effect that all cardioid mics display lends up-close vocals a bassy, authoritative, 'voice of god' type quality, which is ideal for radio and TV voice-over work. 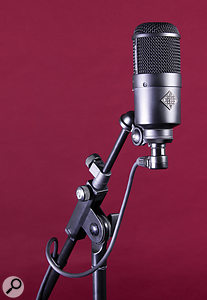 The M82's nominal frequency response is fairly typical of a moving-coil mic. The literature states 25Hz to 18kHz, although the accompanying graph suggests that this is within a large tolerance of around +6dB/-10dB. The plot indicates that the mic is more or less flat between 40Hz and 10kHz, with the low end rolling off gently (-6dB at 30Hz), and the high end dropping off more rapidly, being around 30dB down at 20kHz. There are a couple of narrow peaks, centred around 9kHz (+3dB) and 6kHz (+6dB). The mic's sensitivity is given as 1.85mV/Pa (again, this is fairly typical, and exactly the same as that of the ubiquitous Shure SM58), while its maximum SPL is 160dB.

What makes the M82 somewhat unusual (although not unique — see 'Alternatives' box) is its two 'voicing' switches, marked Kick EQ and High Boost. Both affect the frequency response, with the latter introducing a high-end boost that is around 2dB up at 2kHz, rising to 9dB up at 10kHz. The Kick EQ switch invokes a broad cut between 100Hz and 1kHz, which reaches its deepest (-7dB or so) just below 300Hz. This is said to eliminate the 'boxy' character of some kick drums. Both of these switches can be used simultaneously or independently, giving the mic a total of four different tonalities.

In terms of look and feel, the M82 is what I would describe as 'stocky'. It is just over 15cm in length (including the threaded XLR socket — the body itself is closer to 12cm), and has a diameter of just over 6cm. The mic weighs a reassuringly substantial 635g, and in the hand it has a weight and size not too dissimilar from that of a full can of beer.

Most of the mic's body is given over to a dual-layer metal grille, while all the metalwork is finished in a matt-black powder coating. The aforementioned switches are both labelled, with the text being accompanied by handy 'mini-response-plot' graphics. The two vertical supports that, along with a metal ring around the top of the mic, provide structure to the grille have text informing you in no uncertain terms that this is an end-address mic (they even have large arrows pointing towards the mic's sensitive side).

Included with the review model was an M782 threaded mounting clip, a 'pencil-case' style carrying pouch, and an XLR cable with a right-angled plug at the female end. This is presumably intended to make positioning the mic easier (a welcome consideration, given its relative bulkiness), but I can't imagine it helping much when mounting the mic inside a drum. Where it could come in handy, though, is when using the M82 to mic the batter head of a kick from the outside, where the right-angled connector should buy you a bit more manoeuvrability between kick pedals, snare stands, cymbal stands and so on.

For my tests, I plugged the M82 into my Soundcraft Series 600, taking a direct out and feeding it into Pro Tools HD via a 96 I/O interface. I set the mic up so that its capsule was poking a couple of inches or so into a Pearl Masters-series 24-inch kick drum via a port in the resonant head.

In its 'normal', flat setting the M82 had a punchy, pleasing lower-mid 'oomph' to it, and a healthy balance between the resonance of the shell and the attack of the (felt, in this case) beater. There was a slightly boxy quality to the sound, but switching in the Kick EQ (mid-cut) cured this completely. In fact, getting rid of some of those mids drew my ear to the low-end sustain, and so as well as cleaning up the sound a bit, it seemed to add more weight too.

With the HF boost also engaged, the sound became predictably more scooped and modern-sounding. This setting made very light work of getting an aggressive, pokey, hard-rock kick drum, and would even suit heavier metal styles, which tend to require a very clicky, 'popcorn' kick sound in order to cut through a wall of guitars. 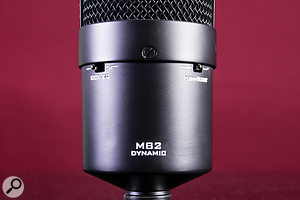 The final voicing on offer was the combination of high boost and no mid-cut, which I didn't find quite so useful. The extra beater slap seemed to hint towards a scooped, 'smile-EQ' tonality, but without that extra space in the mids that the Kick EQ switch added. While I thought the flat setting would work well for older styles of music (blues or jazz, say), the high boost didn't add much of use.

I also compared the M82 with the Heil PR30 also a large-diaphragm dynamic mic. I use the latter on kick a lot when recording reggae, or any style that suits a fairly laid-back, 'not-too-up-front' sound. The two sounded most similar with the M82 in mid-cut-only mode, with the Telefunken having slightly more high-end 'slap' and the Heil displaying a bit more presence in the upper mids. Curiously, given that it's not really marketed as a kick mic, the Heil also seemed to have a bit more going on in the extreme lows — although the differences there were quite subtle. I should also note that the Heil was significantly more sensitive (over 20dB), requiring me to both engage a pad and back off the gain a bit to get the same sort of level.

Finally, I tried both mics on my own spoken voice (I've used the Heil before on podcasts and find it works very well for this). Here, the different EQ settings were even more obvious, with the high-boost switch really coming into its own, lending the M82 a very capacitor-mic-like sound where it had previously been a hint muffled. I couldn't decide whether I preferred the Kick EQ switch in or out on vocals. Without it, the mic sounded satisfyingly weighty and authoritative, but with the switch engaged the impression was of the mic sounding more airy, if a little less bass-heavy.

In almost all of my spoken-word comparisons with the Heil I preferred the M82, the exception being that the Telefunken sounded a mite more woolly in 'flat' mode. In all its other settings, though, the Telefunken came across as sounding clearer and less congested.

In all, I found the M82 a very useful mic. It never once sounded bad, and in some settings, it sounded very good indeed. Although it might seem expensive for a dynamic microphone, the voicing options appear to have been well judged, and as a result the M82 is capable of delivering a very broad variety of kick-drum sounds.

I can think of two other dynamic kick-drum mics that offer different voicing options: the similarly priced AKG D12VR and the slightly cheaper ElectroVoice RE320. There are plenty of capacitor mics to choose from, however, including the Sontronics DM1B and the rather more costly Milab BDM01. And if you can't decide on a capacitor or dynamic kick mic, both Audio-Technica and Lewitt make dual-diaphragm models.

You can hear audio files of all of my kick-drum and spoken-word tests at http://sosm.ag/nov13/m82-media.

A rugged, large-diaphragm dynamic mic that, while expensive, provides good value in terms of offering a wide range of tones.

Distant City Studios - A Drum Room With A Difference
4 weeks 1 day ago.

Difficult Conversations In The Studio
3 weeks 20 hours ago.