Despite sharing a name with a historic Telefunken mic, this is a new design. But it still delivers classy, vintage‑sounding results. 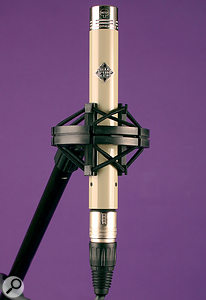 Telefunken's ELA M260 is a new microphone — as opposed to being a clone or reissue of a vintage model, as some of their recent releases have been — but that doesn't mean that there's no history behind it. The story dates back to 1959, when Telefunken ceased to be exclusive worldwide distributors for Neumann microphones. They asked AKG to develop five new microphone models to replace the Neumann product line, among them the classic ELA M251 and the (now somewhat rare) ELA M260. The 21st Century mic shares the same model number and has similar physical attributes, but it's not intended to be an accurate historic reissue, which means of course that we must judge it on its own merits.

Today's ELA M260 is a small‑capsule tube 'stick' microphone that ships with three interchangeable heads for cardioid, omni and hypercardioid polar patterns (designated M260, M261 and M262), so it essentially offers the flexibility of three microphones in one. Each of the capsules is based around a three‑micron‑thick, gold‑sputtered Mylar diaphragm, and has a nominal frequency range of 20Hz to 20kHz. Their sensitivity is 14mV/Pa, and the maximum SPL for one percent distortion is a modest 120dB, as the mic has no pad switch. An equivalent input noise (EIN) of 19dB is quoted, which is about the same as you'd expect from a respectable vintage tube mic.

There's also an adaptor that accepts AKG's CK‑series capsules plus compatible models from other manufacturers, as well as Neumann bayonet-fitting capsules — so for studios that have these capsules already, this could provide a practical option for putting them all to good use.

Physically, the mic is 140mm long and 21mm in diameter. The Telefunken NOS ('new old‑stock') EF732 miniature tube is situated towards the capsule end of the body, hemmed in by some large, high‑quality capacitors and discrete metal‑oxide‑film resistors. The manufacturers recommend that the user does not try to disassemble the microphone, so my comments on the internal structure are based on photographs they provided. A custom‑wound output transformer sits right above the multi‑pin XLR output, which links to the external power supply via the included Gotham Audio cable. Considering what's inside, the small physical size of the mic is rather surprising!

The ELA M260 comes in a padded and fabric‑lined wooden box, and the package includes an elastic shockmount; the mic simply clips into the centre section. A seven‑pin XLR cable is included to connect the mic to the power supply, and you also get a more basic stand clip, with a simple resilient mount separating the stand section from the part that grips the mic. This could be useful in situations where the conventional shockmount is too large, although the shockmount you get is about as compact as it could be while still doing the job.

Telefunken's deliberately retro styling includes grey gloss bodywork paint, chrome capsule housing and of course the deliciously vintage Telefunken logo. The sublimely utilitarian power-supply unit is finished in grey hammer‑finish paint with a strap handle, and has XLRs for the mic connection and balanced output on one end. The IEC mains connection gives away the fact that this design isn't as ancient as it might appear, but everything else, such as the chunky mains toggle switch and jewel‑lens red power lamp, is very much in keeping with the vintage feel.

The included capsules simply screw onto the end of the body: a gold‑plated, spring-loaded centre‑pin makes one point of contact, and the metal threads the other. Using the adaptor adds around 20mm to the length of the mic and converts the male thread at the end of the ELA M260's body to a female thread. Visual inspection confirms a high standard of finish.

All three included capsules and the adaptor come in self‑seal polythene bags, accompanied by a packet of silica gel to absorb any moisture that might find its way in there. A graphic of each capsule's polar pattern is embossed into its side. Ideally, I'd have preferred a slightly more sophisticated storage system (such as a tin box with a padded interior), but at least you can easily find a new plastic bag if you lose or damage one! All the accessories, the mic and the PSU come in sculpted foam packaging inside a cardboard box. While I find bulky camera cases an irritation in many cases, I think it would have been a good idea to provide one in this instance, because there's a chunky power supply unit and bespoke cable to store, and it's nice to keep everything in one place. 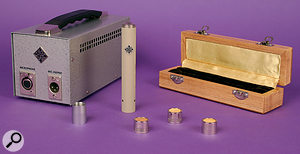 The ELA M260 comes with three Telefunken capsules, as well as an adaptor for AKG capsules.

As with all tube products, a short warm‑up period is required before the microphone springs to life, but for the best performance, it should be left to warm up for half an hour or more prior to use. (This is also true of many solid‑state products including microphones and preamplifiers.) The tube electronics circuitry uses its own power supply, so no phantom power is necessary, although if your mixer has global phantom power that needs to be switched on, the ELA M260 won't mind.

To establish the character of the mic, I used it to record a number of sound sources alongside other 'pencil' mics that I knew to be relatively neutral-sounding. First up, I tried it on an electric guitar amplifier, where it produced a noticeably warmer sound, with more tonal depth than the flatter reference mic. In fact, although a pencil mic wouldn't normally be my first choice for guitar amp recording, I'd certainly be tempted to do more work with this one, because it does a great job at capturing the weight behind the sound, as well as the overall character of the amplifier/ instrument combination. The 120dB SPL limit would only be an issue with high-power tube amps played too loudly!

On acoustic guitar, the mic managed to play down the brittleness of the string attack, while still retaining plenty of clarity and at the same time beefing up the body tone of the instrument and imparting an almost compressed quality to the sound. While it's nice for solo performances, this isn't always what you want in a pop mix, but you can thin out the low end easily with some gentle EQ if necessary. My reference mic sounded almost thin by comparison in this application.

Moving on to hand percussion — which is always a good test to see how a mic deals with transients — the ELA M260 again really brought out the body resonances of the drum (in this case an aluminium-shell darbuka), and gave it a weight and authority that I'd always found difficult to achieve before. The percussive slaps translated well and my impression was similar to the guitar test, where I felt there was adequate transient definition but without hyping up the high end to the point of sounding brittle or thin. This bodes well for the use of the mic as a drum overhead as well as on other percussive instruments such as congas.

A test on voice recording showed the mic to have a wonderfully smooth, full quality, and while it might lack the high-end airiness of some vocal mics, I found it to be very flattering: it would be a good choice for a vocalist needing a bit of that smooth 'Galaxy Chocolate' treatment. The vocal tonality was essentially similar with both cardioid and omni capsules.

As I had my North American Indian wooden flute lying around, I thought I'd give that a go to see what the mic could do and I was rewarded by a well‑balanced tonality but again with more apparent weight to the lower mid-range than I've come to expect, so the pattern that is emerging here is of a mic that flatters the low end of an instrument in a very musical way. In fact I'd almost go as far as to say it delivers more than a hint of an analogue tape sound, which is no bad thing. There's enough low-end extension to do justice to bass instruments, while the three capsules that come with the mic means you can deal with most situations. Switching capsules shows up certain expected differences — omnis pick up more of the room, have a better off‑axis frequency response and don't exhibit a proximity bass rise — but the general character imparted by the microphone electronics remains reassuringly consistent.

As luck would have it, we were sent a pair of these mics, which gave us the opportunity also to try them as a stereo pair. While there were no surprises in this area, it's worth underlining the point that as the mics come with interchangeable capsules, they can be used in spaced omni mode, spaced cardioid mode or as a coincident cardioid pair. This again adds to their flexibility, because their warm tonality would work in their favour when used as stereo room mics for drum kit recording, or for recording a string section.

Good tube microphones are never cheap, but they do have a character that's difficult to emulate or fake with processing. The ELA M260 has a musically engaging, 'old‑school' sound that makes a refreshing change from all those clinically accurate small-diaphragm mics in the marketplace. Perhaps this isn't the mic to choose if you want pin-sharp transients or you want to do the key jangle to test to prove minimal distortion, but for recording real‑world musical sounds with a warm, organic character it has much to commend it, and I love the expensive‑sounding smoothness that it imparts. Indeed, I didn't find any sound sources that it actually did badly on, and it seems to me that the ELA M260 would make a great 'desert island' mic — as long as you pick an island with a mains power supply! If you already have the usual suspects in your mic cupboard, you may find that the ELA M260 is just what you need to add a dash of old‑school charm to those digital DAW recordings, or to smooth out the rough edges of problem instruments.

There are few tube mics of this physical size but if you're after a warm‑sounding mic, it doesn't necessarily have to be a tube model, or even a small‑diaphragm model for that matter. That said, this mic has such a distinctive character that I'd be very hard‑pressed to think of an obvious alternative.

A lovely 'character' microphone that is a great ally in creating a smooth, musical sound. Not cheap but very versatile.