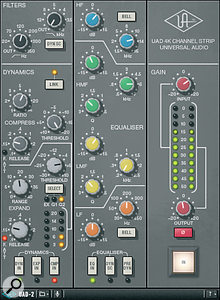 Last year's release of the UAD2 cards gave Universal Audio's DSP platform a healthy performance boost, and ensured compatibility with future systems, thanks to the jump to SHARC DSPs and PCI‑e connectivity. They've also been busy adding new plug‑ins to the range, many of which mimic the sound and performance of vintage gear. The latest additions (addictions?) model the channel strip and bus compressor sections from an SSL console. According to the manual, both plug‑ins are exact (albeit unofficial and unlicensed) emulations of the relevant modules from the SSL 4000G+ desk, which has been the console of choice for many hit mixers over the past 25 years. Both are available for UAD1 and UAD2, in all the usual plug‑in formats.

The UAD 4k Channel Strip contains a filter section, expander/gate, compressor and four‑band EQ, emulating the much favoured Type E 'black knob' EQ found in earlier SSL consoles. The filter section consists of a high‑ and low‑pass filter that may also be used for side‑chain filtering, making them excellent tools for frequency‑dependent compression and expansion. The dynamics section has an easy‑to‑use compressor with ratio, threshold and release controls, plus a slow/fast attack switch and a stereo link function. Ratio is continuously variable from no compression to full limiting, and although attack time is normally auto‑sensing and programme‑dependent, it can also be set to a fixed 1ms value via the Fast Attack button. Finally, the release time is continuously variable between 0.1 and four seconds. In use, the compressor has a seductive automatic make‑up that raises the level several decibels compared to the unprocessed signal, making it easy to over‑use — just like the original.

Thanks to editing features such as 'strip silence' in music software, gates and expanders have fallen out of use in many places, which is sad because a good‑sounding gate can add both excitement and movement when properly used. The gate/expander module here is such a tool. Three different modes are available: expansion and two types of gating. In Expand mode, the module applies downwards expansion at a fixed 1:2 ratio, with the amount of gain reduction determined by the Range control. The first gate setting is faithful to the gate mode on earlier hardware consoles, while the second setting has a 'no chatter' response characteristic that is derived from a modern version of the hardware. Again, the attack time is programme‑dependent but can also be fixed at 1ms, which works very well with percussive sounds. The gate/expander module can go from being subtle to having a rather pushy effect in a musical way, still preserving the timbre of the source. Two LED‑style meters indicate the amount of expansion and compression being applied, but the scale is pretty rough, so it's important to listen to the result.

The EQ module is divided into four frequency bands: the two in the middle are fully parametric, while the high and low bands can be switched between shelving mode and bell (peak/dip) mode. By default, the audio signal is output from the dynamics module into the EQ, but it's possible to reverse the order by engaging the Pre Dyn button. Advanced side‑chain filtering can be accomplished by engaging the dynamic side‑chain function, which removes the EQ from the audio path and puts it in control of the side‑chain input to the dynamics module. The input and output controls make it easy to adjust the signal levels, and the vertical LED meters show the available headroom. However, the range of the threshold control on the dynamics module is relatively limited, and sometimes it's necessary to boost the input level beyond the internal clip level to achieve heavy compression.

In use, the channel strip performs very well, and I was able to beef up a raw drum recording by adding both punch and weight. The EQ behaves much like the original hardware, with the same ability to refocus the sonic impact of a sound, and it pretty much has the quality and smoothness of an analogue EQ even at high gain settings. The dynamics module is an excellent tool for everyday mixing, because the compressor is very easy to use and the expander/gate can add a bit of excitement. Working with the channel strip reminds me of my happiest days mixing on an SSL console!

Smack My Mix Up 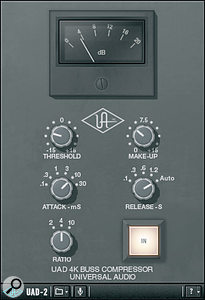 Despite its simple controls, the 4K Buss Compressor is surprisingly versatile.

Next up is the 4k Buss Compressor, which is a digital emulation of the famous SSL 4000G+ bus compressor. The original hardware can be heard on countless hit records, and its transparent VCA‑based compression and SSL signature 'smack' make it a much‑used bus compressor in pop and rock music. The plug‑in looks just like the hardware, with a VU‑style gain‑reduction meter and controls for threshold, make‑up gain, attack, release and ratio, along with a bypass switch. The threshold and make‑up gain are both continuously variable, whereas the rest of the controls have discrete values. Attack settings range from 0.1 to 30 milliseconds: for bus compression duties, attack times below 10 milliseconds are seldom used, but faster settings can work wonders on percussive sounds like drums and acoustic guitar. The release settings range from 0.1 to 1.2 seconds, and the two lowest settings — 0.1 and 0.3 seconds — can produce a nice pumping compression.

There is also a unique auto release setting that is optimised for programme material, and often provides the much‑needed glue that can produce a finished‑sounding mix. The compressor has a soft knee that becomes narrower at higher ratios, which is typical behaviour for a feedback (as opposed to feed‑forward) design, and the three ratio settings work very well for different kinds of material. High ratios tend to be more suitable for aggressive pop and rock mixes, whereas lower ratios will produce a smoother compression that's more appropriate for jazz and ballads.

Having used the compressor on a couple of projects, I'm confident that it's one of the best compressor plug‑ins on the market, and has the quality associated with the original hardware. I'd even go as far as saying that, when pushed hard, it can produce a part of the classic SSL 'smack' sound. What I like most about it is the way it makes vocals sit firmly in the mix without compromising the rest of the mix. In my daily work I normally resort to analogue hardware for bus‑compression duties, but I've found myself using the UAD 4k Buss Compressor more and more. I've also put it to use for parallel compression of drums and mixes with good results. The trick is to send a very hot signal into the compressor and make it work hard, then send just a little bit of the result back into the mix.

A UAD2 Solo card with one DSP chip is able to handle 30 stereo compressors, which should be more than enough. On the same card, 13 mono or eight stereo channel strips can be loaded, and I have successfully loaded 52 mono channel strips on my UAD2 Quad. If you're thinking about investing in a DSP‑based system, the UAD2 platform is a good alternative, with great‑sounding plug‑ins that are humanely priced. With their latest additions, Universal Audio have set a new standard for analogue emulation in software.

The UAD 4K Buss Compressor and Channel Strip set a new standard for analogue emulation in software, convincingly replicating the performance of the original hardware. The Channel Strip is excellent for everyday work and the Buss Compressor provides the glue to produce a finished‑sounding mix.